Cation Exchange Capacity and Base Saturation

Soil clay minerals and organic matter tend to be negatively charged, thus attracting positively charged ions (cations) on their surfaces by electrostatic forces. As a result, the cations remain within the soil root zone and are not easily lost through leaching. The adsorbed cations may easily exchange with other cations in the soil solution, hence the term "cation exchange." The adsorbed cations replenish the ions in the soil solution when concentrations decrease due to uptake by plant roots.

How CEC changes with Soil pH 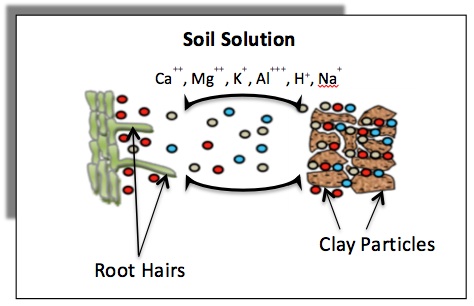 Figure 1. Schematic diagram showing exchange of cations between the soil surfaces and the soil solution, and the movement of these cations from soil solution to roots (rhizosphere) for uptake.

The CEC of soil organic matter and some clay minerals varies with pH. Generally, the CEC is lowest at soil pHs of 3.5 to 4.0 and increases as the pH is increased by liming an acid soil, as shown in Figure 2. Because CEC may vary considerably with soil pH, it is a common practice to measure a soil's CEC at a pH of 7.0. Also note that some positive charges may occur on specific soil mineral surfaces at low pH. These positive charges retain anions (negatively charged ions) such as chloride (Cl-) and sulfate (SO42-).

Calculating the Cation Exchange Capacity from a Routine Soil Test

The CEC value included on typical soil testing laboratory reports is calculated by adding together the concentrations (expressed as milliequivalents of charge per 100 grams of soil) of potassium, magnesium, calcium, sodium and hydrogen, which are extracted from soils using an appropriate extraction method. The University of Georgia Soil Testing Laboratory uses the Mehlich I procedure, based on a double acid (0.05 N HCl + 0.025 N H2SO4) extracting solution. This method is appropriate for acidic, low CEC soils, which are commonly found in Georgia. The CEC of soils containing large amounts of clay or organic matter, or that are alkaline, cannot be satisfactorily analyzed using the Mehlich I extract. Other soil extraction methods should be used on these types of soils.

Figure 2. Influence of pH on the surface charge of soil and its components.

In most soil reports, CEC is expressed as milliequivalents (meq) of charge (number of charges) per 100 grams of soil (meq/100 g or as cmol/kg when using International Scientific Units). The number of milliequivalents is used rather than a weight (pounds, grams, etc.) of adsorbed cations because CEC represents the total number of charges, which is a better standard of comparison of different soils because each cation species has a different weight and soils differ in the proportions of the different cation species.

For practical purposes, Georgia soils are grouped into four major categories: (1) Coastal Plain, (2) Piedmont, (3) Mountain and Limestone Valley and (4) soils from landscapes, golf greens, greenhouses and flower beds. These categories make for easier evaluation of fertility. The chart below describes the CEC and general fertility characteristics of each soil group (Soil Test Handbook for Georgia, 2008).

Percent base saturation (BS) is the percentage of the CEC occupied by the basic cations Ca2+, Mg2+ and K+. Basic cations are distinguished from the acid cations H+ and Al3+. At an approximate soil pH 5.4 or less, Al3+ is present in a significantly high concentration that hinders growth of most plant species, and the lower the soil pH, the greater the amount of toxic Al3+. Therefore, soils with a high percent base saturation are generally more fertile because:

The percentage base saturation is expressed as follows:

Significance of CEC and BS

A soil's CEC affects fertilization and liming practices. For example, soils with high CEC retain more nutrients than low-CEC soils. With large quantities of fertilizers applied in a single application to sandy soils with low CEC, loss of nutrients is more likely to occur via leaching. In contrast, these nutrients are much less susceptible to losses in clay soils.

Crop production releases acidity into soil. Soil pH will decrease more due to crop production on low CEC soils. High CEC soils are generally well buffered such that pH changes much less from crop production. Therefore, sandy soils low in CEC need to be limed more frequently but at lower rates of application than clay soils. Higher lime rates are needed to reach an optimum pH on high CEC soils due to their greater abundance of acidic cations at a given pH.