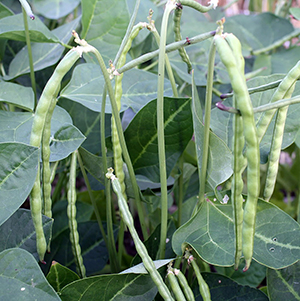 Southern pea or cowpea, pictured above, is a traditional crop in Georgia that could be one of the most important legume crops in the southeastern U.S. if not for serious yield loss caused by the insect known as the cowpea curculio, Chalcodermus aeneus Boheman. Damage caused by cowpea curculio in southern pea is two-fold. First, the adults feed on and lay eggs in the pods; those eggs hatch into larvae that feed inside the pods. This can significantly reduce green pod and shelled pea yield per acre. Secondly, live larvae inside the harvested pods can contaminate and drastically reduce the marketability of peas during processing. Cowpea curculio management in southern pea has traditionally included two basic approaches: (1) spraying adults with insecticide during the flowering and fruiting stage and (2) avoiding southern pea production in locations where curculios are prevalent. Unfortunately, following the second approach greatly limits the viable pea production area throughout much of the Southeast. 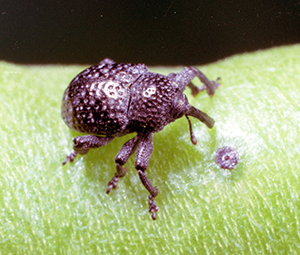 The cowpea curculio is a small (4.8-5.5 mm in length), shiny, dark weevil with deeply pitted elytra and a coarsely punctate thorax (see images below). The life cycle for this insect from egg to adult requires approximately 30-40 days. Adults feed on and oviposit on pea pods or directly into the seed through the pod wall. The egg hatches within the pod and the larva, or grub, then completes four stadia while feeding extensively in the pod. The 4th instar reaches a length of 7 mm before eating out of the pod and falling to the ground. The larva will burrow 1-3 inches deep into the soil, where it creates a pupal cell, pupates and emerges as an adult (Arant, 1938). The duration of the pupa stage requires five to 19 days until the second generation adults emerge from the soil. The emerged adults mate and begin laying eggs in the same or subsequent southern pea plantings. If the peas are harvested before the larva exits the pod, the larvae are considered a contaminant, which causes quality loss in addition to yield loss. 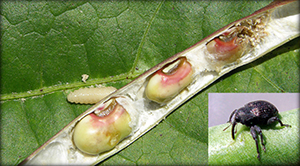 A new sampling method using traps (pictured above) has been developed to detect the initial movement of cowpea curculio adults into a southern pea field. Cowpea curculio adults overwinter on weeds such as narrow-leaved vetch, purple cudweed, heartwing sorrel, cutleaf eveningprimrose and moss verbena before moving into cowpeas by mid-May (Sudbrink et al., 1998). The potential for cowpea curculio outbreaks can be assessed by trapping adults, similar to what has been done in other curculio host crops (Mizell and Schiffhauer, 1987). With the above trap, adult cowpea curculios have been detected as early as April 10 in south Georgia. Thus, trapping could provide an indication of the early invasion of fields by overwintered adults. Since cowpea curculio can feed on early-planted snap bean or other beans, growers should be aware that planting southern pea adjacent to an early-planted bean crop could increase the number of curculios at that location. Later in the summer, cowpea curculio can also reproduce on sicklepod. Fall populations of cowpea curculio mainly build up on the southern pea crop itself, but can also produce an overwintering generation on the beans of Strophostyles weeds (Sudbrink et al., 1998). 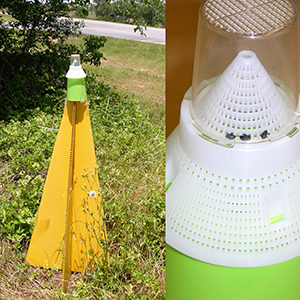 Insecticide applications applied from first flower to the pre-harvest interval are the standard control program for this pest. Unfortunately, there are very few, if any, effective options for controlling cowpea curculio in regions where populations are high each year. For the past decade, the most effective labeled insecticides were all in the pyrethroid mode of action group (Insecticide Resistance Action Committee [IRAC] Group 3). Reduced curculio response to one pyrethroid, esfenvalerate, was documented in Georgia as early as 1987 (N?Guessan and Chalfant, 1990). Recent efficacy trials suggest that increased tolerance to some of these insecticides is common within southeastern cowpea curculio populations. Even with effective insecticides, proper timing from bloom through pod formation and good spray coverage are critical. Ideally, growers should utilize several modes of action (IRAC insecticide groups) that could be rotated over the southern pea production season to reduce selection for insecticide resistance. New control options are continuously being sought and this information is made available through the UGA Extension. We are investigating the use of insecticide applications at the end of the fall season to target cowpea curculio adults before they overwinter. This approach is designed to decrease the overall curculio "load" in the farm landscape. A non-pyrethroid insecticide will be used to avoid additional selection pressure for pyrethroid resistance.