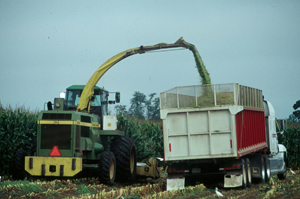 Determining an equitable price for purchased forages is a necessary but often uncomfortable topic of discussion for feed growers and purchasers. Usually this discussion is in the context of corn silage; however, the same principles can be used in any discussion involving hay, baleage or grains.

In order for an input market to be efficient, the price agreed upon by both buyers and sellers should adequately compensate the producer while still allowing the purchaser the opportunity to economically use the input.

An equitable price can only truly be reached if both parties know the forage's value to them. Producers must know their total cost and purchasers must know the value of production from using the input (silage in this case). In some years it is quite possible that because of escalating inputs for the corn grower or cheaper milk for the dairy producer a corn silage price that will satisfy both producers objectives cannot be attained. In that instance, there will likely be some serious negotiating that occurs between the parties.

The value of the silage to the producer depends upon the alternatives for the crop because the price paid for the silage must compensate the grower for any foregone revenue from alternative markets.

Alternatively, if the corn crop grown is a silage variety, then a more correct valuation would be the value of the silage at the stage when ownership changes. For example, if a dairy producer will be purchasing a crop standing in the field ready for silage harvest, then a reasonable price to the corn grower is his total cost up to that point, plus some return. For instance, if the corn grower has $500 invested in a corn crop prior to harvest and desires an annual return of 10 percent on his investment for the four months that his money has been invested, then a more appropriate charge would be the $500 plus $16.50 return on investment (10 percent per year for four months = 3.33% X $500).

Corn silage budgets are available from the UGA Extension Agricultural and Applied Economics website at www.secattleadvisor.com under "Budgets and Decision-aids."

For the dairy producer, the true value of the silage will be determined by the value of the production as well as the feeding alternatives for the silage. For example, silage fed to lactating cows will likely have a higher value of production than silage fed to heifers. It also follows that when milk prices are higher, dairy producers should be able to pay more for silage than when prices are lower. 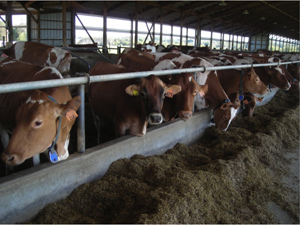 One method that dairy producers may find useful for determining the value of silage is known as the "residual value" or "returns to silage." Using this method, dairymen determine their net returns with all costs included except for a ZERO price for silage. If they know how many tons of silage they will feed, they can determine the most they can pay for silage.

For example, if a producer has total costs of $15/Cwt. for milk, excluding silage, and will feed his cows 22 tons of silage to achieve a milk yield of 23,000 pounds, the residual value of silage will be $52.27 per ton at $20/Cwt. for milk, $0 at $15/Cwt. and ($52.27) at $10/Cwt. milk price. In the last two situations, the producer will just be trying to minimize his losses so he will have to negotiate especially hard with the corn grower.

Programs such as "Milk2006cornsilagev" can be used to generate numbers that will help complete this analysis. A summary table showing how the numbers from this program can be used in developing the residual price is shown below.

In addition to the residual value method, producers can compare other alternatives to feeding silage. In other words, if a ration can be formulated without silage and will yield the same level of milk production, producers can use the cost difference between the two rations to estimate the value of corn silage.

An example of using this method is given below in Table 2. In this table, prices of alfalfa hay (50 percent), corn (28 percent) and soybean hull pellets (22 percent) are used to indicate the equivalent price of corn silage on an as-fed basis.

In recent years, technology has enabled the development of numerous corn varieties designed specifically for silage production. By design, these varieties can produce more milk with less tonnage than a grain variety. As a result, it is important for both corn and dairy producers to think in terms of milk per acre as opposed to tons of silage per acre. Although this may complicate matters for some producers, it will likely help others determine the true value of corn silage.

To determine milk production per acre, producers will need some way to convert silage quality and tonnage into a milk yield response. This can be done by using a ration-formulation program, a ration evaluator or some other decision-aid.

One such decision-aid is "Milk2006Cornsilagev." This program, available from University of Wisconsin Extension, is a Microsoft Excel spreadsheet that allows producers to enter information regarding silage quality and yield and then returns an estimated milk yield per acre. Using this information, corn or dairy producers can estimate milk value per acre and then determine the value of corn silage.

To arrive at an equitable price for corn silage, it is critical for both corn and dairy producers to understand their production costs as well as the value of corn silage alternatives. 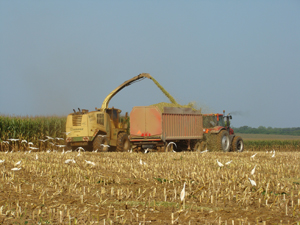 If corn silage is sold standing in the field, corn producers can use their input cost plus some rate of return as well as the value of the silage sold as grain minus harvesting costs. If it is to be sold delivered to the dairyman, the total cost of production plus hauling plus some return on investment should be used.

Dairy producers should evaluate corn silage in terms of its production value as well as the value of alternative feedstuffs.

In some years, market conditions may exist that cause the price of the silage to be too high for dairymen or too low for the crop producer. In those situations, the two parties should acknowledge what is occurring and negotiate a price that inflicts minimal financial damage on everyone involved.