Your Household Water Quality: Odors in Your Water

Homeowners sometimes experience unpleasant odors in their household water. In many cases, the exact cause of the odor is difficult to determine by water testing; however, this publication provides a few general recommendations for treating some common causes of household water odors. 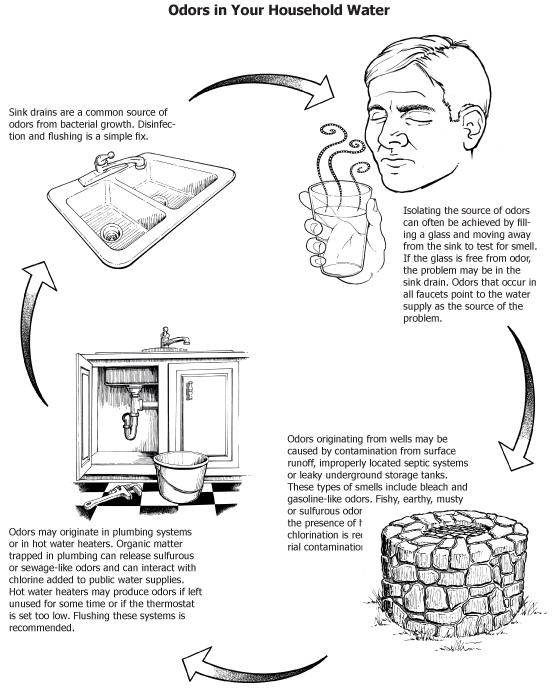 Locating the Source of the Odor 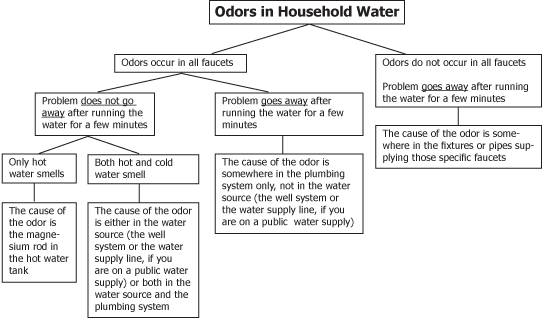 For odors coming from the plumbing system or the well system, corrective measures are suggested. If you obtain water from a public water supply (PWS) and the odor is suspected to originate from the water source line, contact your water provider. This is especially true if your neighbors also experience the same type of odor problem.

If a particular odor problem in your household water and its cause are not included in this list, discuss the problem with a drinking water professional from your water provider (if you are on a public water supply), county health department or UGA Cooperative Extension agent (1-800-ASK-UGA-1).

a. Bleach, Chemical or Medicinal Odor

Public water suppliers generally chlorinate water to prevent bacterial growth. Typical levels of free chlorine in drinking water from PWS are 0.2 - 2.0 parts per million (ppm), though levels can be as high as 5.0 ppm. Odors resulting from a chlorine addition usually go away if the water is exposed to air for several minutes.

Adding chlorine to the water through shock chlorination of a well or plumbing system produces a strong bleach (chlorine) odor. The bleach smell stops when chlorine completely dissipates. This requires turning on outside faucets and letting the water run until the smell is gone.

In some cases, the added chlorine may interact with organic materials built up in the plumbing system and add odor to the water. The odor should disappear after running the water for a few minutes. Use Figure 1 to locate the source of the odor. If water is supplied by your own well and the problem appears to be in your plumbing and/or well systems, then your entire water system should be flushed, preferably by a licensed well driller or pump installer. If you are on a PWS and the problem appears to be the water supply line, contact your water supply authority.

Generally, a rotten egg (or sulfurous), decayed or sewage-like odor in household water is a result of bacterial activity, which can be due to:

For more information about rotten egg odor, refer to the University of Georgia publication “Your Household Water Quality: Hydrogen Sulfide and Sulfate.”

Although these odors are harmless, the human senses of taste and smell are extremely sensitive even at a very low level. These kinds of odors may be due to:

The presence of bacteria is very common in both cases. By far, the most common cause of this type of problem is the decaying organic matter deposited over time in the drain. To make sure the problem is not in the well, fill a glass with tap water, then step away from the sink and swirl the water around inside the glass few times. If the problem is in the drain, the tap water in the glass should not have an odor. Disinfecting, cleaning and flushing the drain should eliminate the odor.

The reservoir/pressure tank may also be the source of such an odor. Cleaning and maintaining the reservoir/ pressure tank periodically can prevent bacteria from growing to levels that cause odor in the water. Less commonly, certain types of algae, fungi and bacteria growing in the water supply, especially during warm weather, can affect the water odor.

If the problem is in the well, shock chlorinate the well and pump out plenty of water until the smell of chlorine disappears. If the problem persists, consider installing:

If you are on a PWS and insufficient chlorine is being used to disinfect the water, certain types of bacteria may grow in the supply line and cause these kinds of odors. Contact your water supply authority or county health department.

Even though these odor problems are rare, they are potentially serious. These odors may be due to:

Stop drinking the water because it may cause several adverse health consequences, including but not limited to:

If you are on a PWS, contact your water supply authority and county health department immediately.

Color, Taste, and Odor: What you should know. Massachusetts Department of Environmental Protection. http://www.mass.gov/dep/water/drinking/color.htm