The Truth about Slime Molds, Spanish Moss, Lichens and Mistletoe 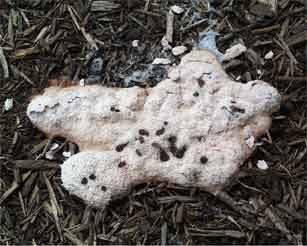 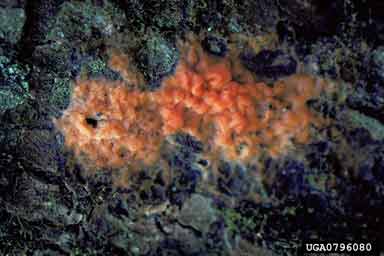 Figure 2. Orange plasmodium on a tree.

Slime molds belong to a 'primitive' class of fungi called Myxomycetes. It is a small group of organisms with only 700 species known worldwide. They are organisms that obtain their nutrients from dead or decaying matter and are most prevalent following extended periods of wetness. Slime molds can be found in lawns, flower beds, gardens, and anywhere organic matter is present. Spores germinate into structures that eventually merge together and form a large plasmodium, otherwise know as 'the blob' (Fig 1). A plasmodium is a shapeless growing mass that may reach two feet in diameter. In Georgia, slime molds differ from blue-gray in color to yellow, orange or black.

Slime molds 'creep' along slowly but may travel up to several feet a day. Slime molds do not cause any direct injury to plants but may inhibit photosynthesis if the plasmodium is thick and persistent. As weather conditions dry, the plasmodium forms spore-producing structures and spores are blown by the wind to new locations to start the cycle over. These spore masses can appear as gray to black dusts on grasses or other plant materials.

Slime molds are essentially harmless and are only considered a nuisance. Control does not require any chemicals and simply mowing over the lawn removes them from view. On mulch, raking or disturbing the slime mold with forceful water sprays is all that is needed. 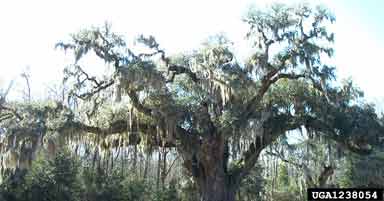 Figure 3. Moss only uses a tree for protection and support. 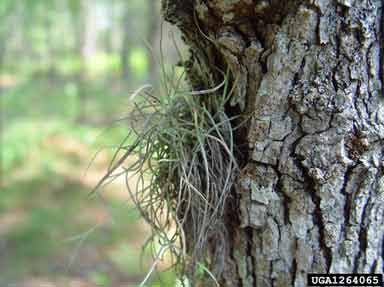 Spanish moss (Tillandsia usneoides) is an epiphytic plant found growing mainly on hardwoods throughout the Southeast. It is not a plant parasite and only uses the tree for support and protection (Fig 3). Instead, it makes its own food. Spanish moss has long slender stems that wrap around the tree allowing it to hang in the air (Fig 4).

Tiny scale-like cups on the stems catch water and nutrients from the air thereby enabling the moss to undergo photosynthesis. The Spanish moss' water-catching ability allows it to be drought-resistant and survive extreme dry spells. Spanish moss does require sunlight and can be found on trees in decline or trees with small openings in the canopy. Even though Spanish moss does not directly affect trees, abundant growth may inhibit tree foliation and reduce photosynthesis.

Spanish moss is relatively harmless to trees; however, if excessive growth is occurring, one may manually remove the moss and increase tree vigor with proper fertility and irrigation to increase foliation thereby preventing much needed sunlight for moss photosynthesis. 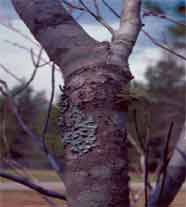 Figure 5. Lichens obtain water and nutrients from air and the microbes on bark. 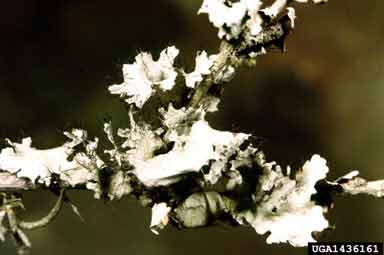 Figure 6. Lichen on a declining tree.

Lichens are composite, symbiotic organisms made up from members of as many as three biological kingdoms . The lichen fungi cultivate partners that manufacture food by photosynthesis. Sometimes the partners are algae, other times cyanobacterium, formerly called blue-green algae. Some enterprising fungi exploit both at once.

The alga or cyanobacterium converts sunlight and carbon dioxide to food for the lichen fungus and in return the lichen fungus protects the alga/cyanobacterium from drying out. The fungus obtains water and minerals from the air and the material it is growing on (Fig 5). The alga provides carbohydrates and vitamins. Some blue-green algae fix nitrogen that is used by both the alga and the fungus. Nitrogen is also obtained from bird excrement, organic debris, or plant leachate . It has been said that lichens are fungi that have discovered agriculture.

Lichens are found on rocks, tortoise shells, window panes, and plants. As plants are stressed and begin to decline, the reduced canopy allows sunlight to enter and support photosynthesis for the lichen. The presence of lichens are often an indicator of poor plant health but it is never the cause (Fig 6). Lichens are harmless to plants and, if overall plant health is improved, the vibrant canopy should inhibit any sunlight available for lichen photosynthesis. 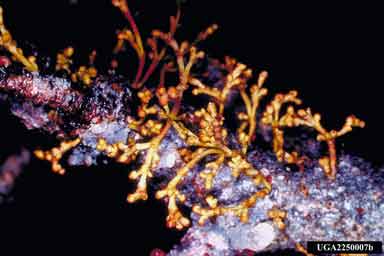 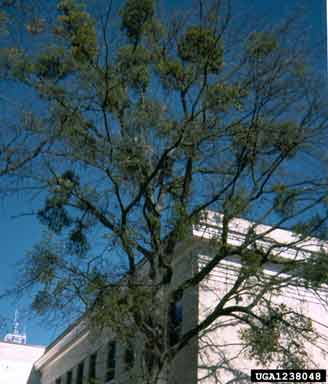 Mistletoe is an evergreen parasitic plant found on a wide host range including alder, birch, cottonwood, maple, oak, and zelkova among others. Mistletoe obtains water and minerals from the host but it is not totally dependent. Leaves of the mistletoe contain chlorophyll and are capable of making their own food from carbon dioxide and water like other plants. Birds feed on the berries produced and excrete them to new hosts. When the seeds germinate, it grows through the bark and into the vascular system of the host where it obtains water and minerals (Fig 7).

On younger plants, the older leaves will curve downward and droop. The bases of the affected stems enlarge, and the vascular system becomes brown. On older plants, symptoms are apparent from blossoming to fruit maturation. The first symptom is chlorosis of the older leaves, usually on only one side of the plant. A browning of the vascular tissue extends up the stem while the pith remains healthy (Figure 3). Gradually, the yellowing affects all of the plant, causing it to wilt during hot temperatures. Eventually the plants will die.

The mistletoe grows slowly at first and it may be years before seeds are produced. Healthy trees are able to tolerate small mistletoe infestations, but individual branches may be compromised and susceptible to wind or cold injuries. Heavy infestations may reduce the overall plant health or kill a tree especially if the tree is already stressed from environmental factors (Fig 8).

Since mistletoe takes several years to produce seed simply removing it will provide some protection. Mistletoe may also be pruned out one foot below the point of attachment. If the mistletoe is located on a main limb or trunk, removing the top of the mistletoe and wrapping the cut with an opaque plastic to prevent sunlight may be beneficial. In addition to these mechanical controls, the growth regulator ethephon may be used when the host is dormant.