Few feed ingredients have enjoyed such a pronounced increase in popularity as distillers grains. In the early 2000s, government mandates caused the ethanol industry to greatly increase production to reach a target level of 7.5 billion gallons by 2012. This growth led to a huge increase in the construction of ethanol plants throughout the Midwest, even extending into south Georgia. The expansion of the ethanol industry was one of the driving forces behind a corresponding increase in corn prices.

As the production of ethanol increased, so did the availability of corn byproducts. Byproducts were initially considered a waste product by the milling industry. However, as production increased, the livestock nutrition industry developed a strong market for these products. Even though corn prices have moderated, distillers grains have found a lasting place in beef cattle feeding systems. Distillers grains are composed of the protein, fiber, mineral, and fat fractions of the corn kernel after the starch has been fermented to produce ethanol. In order to use these ingredients properly, producers should understand how they are produced, their characteristics, and how to formulate a ration with these products.

Grain alcohol has been manufactured for centuries, and distillers grains have been used as a feedstuff since the beginning of the 19th century. Most new ethanol plants use a dry milling process to produce ethanol. This involves yeast fermentation of the starch fraction of corn to produce ethanol and carbon dioxide. Starch comprises about two-thirds of corn, and it is fermented to ethanol in the dry milling process. Compared with corn, the process results in a three-fold increase of all other components found in distillers grain. The remaining residue is known as “whole stillage.”

These variations can cause large fluctuations in the moisture content and the nutrient availability of distillers grains. Distillers grains are available with different amounts of moisture: “wet,” which is 30% dry matter; “modified wet,” which is 50% dry matter; and “dried,” which is 90% dry matter. These variations are derived from the drying process. If excess heat is applied during the drying process, the protein in DDG and DDGS can be heat-damaged and become bound protein. This reduces its utilization by cattle. This damage can easily be detected by visual inspection. Properly dried DDG and DDGS will have a light golden color; however, as it becomes heat damaged, it will darken in color and have a distinctive, burnt odor. Figure 1 illustrates the visual difference between an undamaged and a heat-damaged load of DDG. Analysis of load ‘A,’ golden in color, indicates 30.7% crude protein (CP) and 2.3% bound protein, while load ‘B,’ darker in color, is 26.9% CP and 9.9% bound protein. The adjusted CP, or available protein, for load ‘A’ and load ‘B’ is 28.4% and 17%, respectively. This can create protein deficiencies if not taken into consideration when balancing a ration. The price per pound of protein (described below) will increase, as well.

The most common ethanol byproduct available in Georgia is DDGS. A summary of the nutrient analysis of approximately 130 DDGS samples submitted to Cumberland Valley Analytical Services (Waynesboro, Pennsylvania) from the Southeast is presented in Table 1. These byproducts can be fed as a protein source to replace other more expensive sources, such as soybean meal. The protein in DDGS is approximately 50% degradable intake protein (DIP) and 50% undegradable intake protein (UIP). Degradable intake protein, as its name implies, is broken down or degraded in the rumen by microbes. This is important to one, maintain proper forage digestion and two, produce microbial crude protein, which is used by the animal. If DIP is deficient, forage digestion will decrease. This is a common problem for operations battling forage quality issues.

Undegradable intake protein, also called bypass protein, cannot be degraded by the rumen microbes and passes to the intestine where it will potentially be utilized. If the DIP requirement is met, UIP can improve growth and reproductive performance in young cattle. In young calves, a quality source of UIP is necessary for optimal performance because DIP alone will not supply sufficient amino acids to the small intestine.

1: Average analysis of 140 to 180 samples, depending on nutrient

The mineral content of distillers grains should also be taken into consideration. Dried distillers grain is high in phosphorus (P) and sulfur (S), but low in calcium (Ca). Supplemental Ca should be provided to balance the high phosphorus levels to maintain a Ca:P ratio above 1.5:1. If this ratio stays low for extended periods of time, urinary calculi, or “water belly,” may occur. “Water belly” is a condition in which stones (calculi) block the urethra in cattle and other animals, causing the bladder to enlarge until it bursts. Excessive P excretion can also have a negative impact on water sources, increasing the risk of algal bloom.

In the milling process, sulfuric acid is used to stop the fermentation process. This adds sulfur to the distillers grains in levels that can exceed 1%. Wide ranges of S content have been reported between different ethanol plants, likely due to variations in the amount of sulfuric acid used during milling and the amount of sulfur in the water in the region. High sulfur levels in distillers grains must be monitored due to the interaction it has with other minerals. The increased sulfur levels found in distillers grains can reduce copper (Cu) absorption and contribute to a Cu deficiency. Elevated sulfur is also associated with Polio or Polioencephalomalacia in cattle. Polio, also called “brainers,” is a neurological disease that presents symptoms of blindness, incoordination, staggering, and seizures in cattle. Polio was once thought to be caused solely by a thiamine deficiency, but today it is known to be caused by sulfur toxicity, lead toxicity, salt toxicity, and decreased oxygen available to the brain. The increased sulfur level in the blood of the animal interferes with cellular energy production. The brain requires a high level of energy, so sulfur levels severely affect neurological function. Careful testing should be performed to determine sulfur levels in distillers grains before feeding.

When developing a ration with distillers grains, the first factor is deciding which form to use. This decision can be affected by the location of the farm, production goals of the operation, and storage available; however, the UGA Cooperative Extension Bulletin 1482 • Using Distillers Grains in Beef Cattle Diets 5 primary consideration for most producers is the cost of available distillers grains. Due to variations in moisture, crude protein (CP), and total digestible nutrients (TDN), feedstuffs should be evaluated on a price per unit of a specific nutrient. Price can be determined by the following formula:

To avoid potential health issues, distillers grains should be limited to 30% of intake on a dry-matter basis. Dried distillers grains can be fed as a creep feed ingredient up to 50% of the diet. In stocker calves and finishing cattle, distillers grains can be fed up to 1% of body weight (e.g., 7 lb/d for a 700 lb calf). Segers et al. (2014) evaluated the utilization of DDGS at 25% of the dry matter in a corn-silage-based ration to replace ground corn and soybean meal. These authors found similar average daily gain (2.4 lb/d), but the cost of gain was lower for DDGS compared to corn and soybean meal ($51.71/cwt and $61.23/cwt, respectively). Similarly, another study (Stelzleni et al., 2016) used DDGS at 25% of the dry-matter ration to replace all soybean meal and a portion of the corn in a finishing ration. Steer gains were higher for DDGS compared to soybean meal and corn (4.3 and 3.8 lb/d, respectively), and feed conversion was improved for steers consuming DDGS compared to soybean meal and corn (6.06 vs. 6.67 lb of feed/lb of gain) This same feeding guideline is applicable for bulls. In bred heifers and cows, DDG can be incorporated in the diet anywhere from 3-5 lb/ head a day. Lactating beef cows can be fed 6-8 lb of DDG/head (hd)/day.

An on-farm trial was conducted in northeast Georgia to determine the level of intake in free-choice feeding of DDGS with tall fescue hay to developing heifers. Chemical analysis of the hay and DDG are presented in Table 2. The heifers were divided into two groups: developing heifers and bred heifers (with body weights of 590 lbs and 785 lbs, respectively). Body weights and blood samples were collected on days 1, 23, and 53 of the study. Body weight was used to monitor gain, and blood was used to monitor levels of calcium, copper, phosphorus, and blood urea nitrogen. Both groups were offered DDGS, beginning with 2 lb/hd/d. This amount was gradually increased each day to determine if heifers would self-limit intake of DDGS based on fat content. This concept would be similar to the strategy used with whole cottonseed.

By day 20, daily intake reached 12 lb/hd before the heifers self-limited intake of the DDGS (Figure 1). The free choice offering was discontinued because this level of intake can potentially cause problems due to high sulfur and phosphorus consumption. A premix containing salt, limestone, and trace mineral (Table 3) was formulated to limit intake of DDGS, and the chemical composition is presented in Table 2. These types of “hot mixes” can be used to limit intake in operations where labor and management resources are limited. The amount of premix included in the diet was adjusted on days 21 to 30, until a diet containing 85% DDGS and 15% premix limited intake of DDGS to approximately 40% of the daily dry matter intake for both developing heifers (7.8 lbs) and bred heifers (9.3 lb) over a seven-day period, as illustrated in Figure 2. This strategy would allow DDGS to be fed free-choice, provide trace minerals, maintain a Ca:P ratio above 2:1, and prevent excessive intake of DDGS. In this experiment, the mix was used in heifers, resulting in average daily gains of 1.95 lb for weaned heifers, and 1.07 lb for bred heifers (Table 4). It could serve as a potential supplement for brood cows and bulls.

The blood calcium concentration was normal throughout the feeding trial (Table 5). This would suggest that phosphorus intake was not high enough to negatively affect calcium metabolism. Copper concentration remained normal, suggesting no antagonism from sulfur. Blood urea nitrogen of developing heifers was elevated above 21 mg/dL on free choice DDG, but decreased to 18.3 mg/dL when intake was limited with the salt premix. Blood urea nitrogen above 20 mg/dL has been associated with decreased conception and pregnancy rates in cattle (Elrod and Butler, 1993). However, if DDG is fed within the recommended amount, blood urea nitrogen should not be an issue. 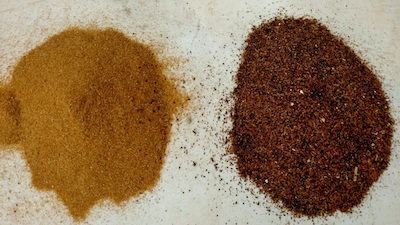 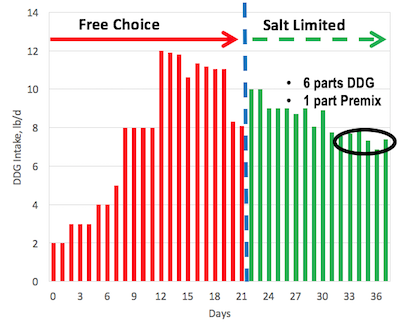 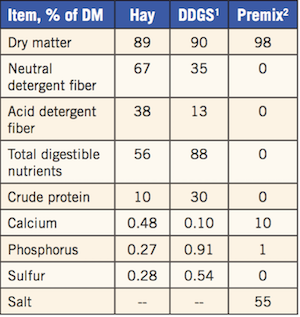 1: DDGS were offered initially at a rate of 2 lbs/head/day and increased to free choice intake until intake reached 12 lbs/head/day, at which time premix was included. 2 Premix was added at 10% of daily intake to limit intake of DDGS, avoiding unsafe S and P levels. 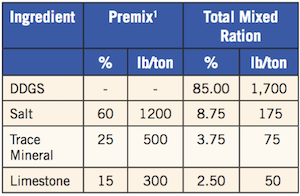 1: DDGS were offered initially at a rate of 2 lbs/head/day and increased to free choice intake until intake reached 12 lbs/ head/day, at which time premix was included.

2: Premix was added at a 10% of daily intake to limit intake of DDGS, avoiding unsafe S and P levels.

1: DDGS were offered initially at a rate of 2 lbs/head/day and increased to free choice intake until intake reached 12 lbs/ head/day at which time premix was included at 10% of daily intake to limit intake of DDGS, avoiding unsafe S and P levels.

The future of the feed industry and ethanol production is unclear and ever-changing. Distillers grains have become a staple feed for many different types of cattle operations. Despite limitations with sulfur, phosphorus, and fat, distillers grains offer producers an additional option for protein and energy supplementation when cost is not prohibitive. It is recommended that distillers grains be regularly tested for nutrient concentration and percent dry matter. For assistance developing beef cattle rations using distillers grains, please contact your local Extension office at 1-800-ASK-UGA-1 or extension.uga.edu.

The authors would like to thank Lee Brown of Colbert, Georgia, for his collaboration with the on-farm trial, and Joe Davis Cattle Company, Westminster, South Carolina, for providing feed samples for the demonstration of heatdamaged feed.

Faculty
Lawton Stewart Professor and Extension Coordinator, Animal & Dairy Science
Have a question? Contact your local UGA Extension office to find out how our team of county agents can assist you.
Set County Preference
Related Publications