Since the inception of the Clean Water Act and subsequent creation of the United States Environmental Protection Agency (EPA) in the early 1970s, industrial, institutional and commercial entities have been required to continually improve the quality of their process wastewater effluent discharges. At the same time, the rise in population and production rates has increased water use, creating a corresponding rise in wastewater quantity. This increased water use and process wastewater generation requires more efficient removal of by-products and pollutants that allows for effluent discharge within established environmental regulatory limits.

Algae by definition are an assemblage of a large and diverse group of primitive waterborne organisms, sometimes referred to as “simple plants” because they lack the many distinct organs found in plants on land, such as roots, stems and leaves. Algae are autotrophic organisms that can range in size from single cells to large multi-cellular seaweeds that can grow to over 150 feet (45 meters). Autotrophic organisms are the “producers” in a food chain that manufacture complex organic compounds from simple inorganic molecules using photosynthesis, or the energy generated by the sun. Algae are ubiquitous in the environment and occur in every kind of water habitat, including freshwater, brackish and marine environments. Because the term “algae” is used to define such a large and varied group of organisms, scientists typically subdivide the assemblage into macroalgae, the multi-cellular algal organisms, and microalgae, the microscopic algal organisms.

Microalgae are single-cell (unicellular) algal species that can survive individually or in chains or clusters. Microalgae also exist in both suspended forms ? species that free-float in a water body ? and attached forms, which are species that adhere to a submerged surface. Depending on the species, algae can range from 1 micron (μm) to a few hundred microns in size. As a point of reference, 1 micron (μm) = 1/1000 of a millimeter (mm). Microalgae are one of the most important groups of organisms on the planet. It is estimated that microalgae produce approximately half of the atmospheric oxygen on earth, while consuming vast amounts of the greenhouse gas carbon dioxide. The biodiversity of microalgae is also enormous. It has been estimated that as many as 200,000 to 800,000 species exist of which only about 35,000 species have been identified and described.

Microalgae play a vital role in the assimilation of pollutants in natural water systems. The various organic compounds created by algal photosynthesis in these natural environments enter the aquatic food chain and provide food to a variety of microbes and other heterotrophs. In addition, the reduced and stabilized carbon is often directly deposited as detritus to form organic peat sediments in wetlands, ponds and lakes. Since the algal and flora species in natural water systems are dependent on many factors such as temperature, pH, age, season, altitude and water composition and remain in a relatively delicate balance, the addition of any new pollutant source for potential treatment is not recommended. However, artificial environments can be created to concentrate, control and tailor the growth of microalgae to efficiently treat a variety of wastewaters.

Although microalgae exist throughout natural water systems in various forms and concentrations, it is the mass culture (or the concentrated growth and management) of microalgae that makes it viable for wastewater treatment. The mass culture of microalgae in wastewater can significantly contribute to the management of water ecosystems by providing an inexpensive, environmentally sound addition (in cases of relatively heavy pollutant loading situations) or alternative (in cases of relatively light pollutant loading situations) to conventional energyintensive wastewater treatment systems. 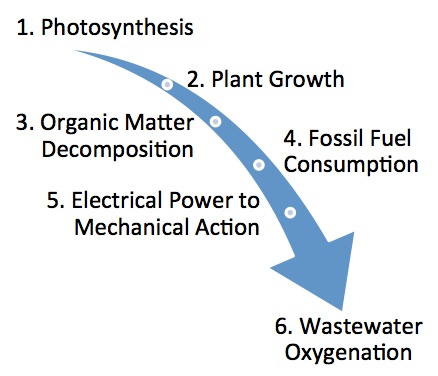 Figure 1. The six steps required to deliver dissolved oxygen (DO) into solution in a conventionally operated wastewater treatment system.

Basic engineering principles teach us that at each step of this process, energy is lost and thus costs increase.

Conversely, in a microalgae wastewater treatment system, oxygen is supplied as a direct product of the photosynthesis process. Thus, the six-step process of supplying oxygen in a conventional activated sludge wastewater treatment system is replaced by the much less energy intensive two-step oxygenation process where wastewater oxygenation is created by the action of microalgae respiration during the process of photosynthesis.

The major disadvantage of mass-cultured microalgae systems compared to conventional aerobic wastewater treatment systems is the space requirement, or “footprint.” Since microalgae rely on photosynthesis, the availability of sunlight to reach the microalgae is critical. Most mass-cultured microalgae systems are designed as shallow raceways 6 to 12 inches (15 to 30 cm) in depth, which requires much more space than conventional wastewater treatment oxidation ditches that can be several feet deep. However, the disadvantage of the larger footprint associated with microalgae systems is much greater in highly developed urban areas where land prices are high. This disadvantage is often offset in less developed areas or in urban areas where large amounts of inexpensive land are available and low operation costs are desired. Microalgae wastewater treatment systems also operate much more efficiently in warm weather climates where little chance of freezing temperatures exists.

The most common and simplest use of microalgae in wastewater treatment is in waste stabilization ponds (WSPs). The development of WSPs as an accepted secondary wastewater treatment process has been a largely accidental occurrence. Ponds or lagoons were originally constructed at wastewater treatment plants as sedimentation basins or as emergency overflow devices. It is really only in the last 20 years or so that WSP design and operational criteria have been established. WSPs are now accepted as major treatment processes throughout the world and are popular alternatives to other biological treatment systems in areas of the globe that have ample sunlight and inexpensive, readily available land. WSP are particularly favored in Australia, Africa, India, Canada, and certain areas of the U.S.

WSPs include both mechanically aerated lagoons and natural oxidation ponds. Natural oxidation ponds are designed to provide aerobic breakdown of organic matter in wastewater, with a significant proportion of the dissolved oxygen (DO) provided by microalgae. Three types of WSPs fall within this category:

Facultative ponds (FPs) are characterized by having an upper aerobic zone ? an area at the surface of the pond with available free-oxygen ? and a lower anaerobic zone, which is a lower depth area with no available freeoxygen. Active wastewater treatment processes occur in both levels of an FP. FPs are the most common type of WSP and can fully treat domestic sewage and a wide range of organic industrial wastewaters. FPs involve a complex relationship between aerobic and anaerobic bacteria, which are the primary decomposers in the WSP, and microalgae. The basic biological interactions in a facultative pond are shown in Figure 2. 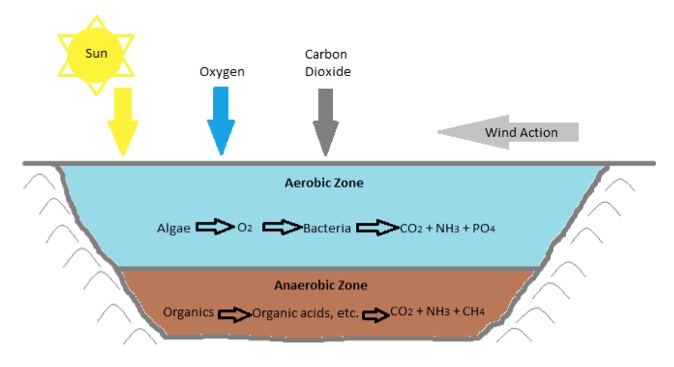 Figure 2. The basic biological interactions in a facultative pond.

Although there is a succession of dominant suspended and attached microalgae species that live at various times during the year in an FP, generally only one or two species will dominate at any one time. Researchers have found a striking similarity between the algal species present in FPs across the U.S., finding little geographic effect.

Due to the absence of suitable surfaces for the attachment of nitrifying bacteria, which are a specific type of bacteria needed to remove nitrogen for wastewater, nitrification is largely absent from FPs. Unless there is adequate nitrate (a specific form of nitrogen found in wastewater) in the influent stream then denitrification will be negligible. However, removal rates of 80 percent total nitrogen and 95 percent total ammonia have been reported in FPs. Biochemical oxygen demand (BOD) removal can be expected to be 90 percent with an accompanying phosphorus removal up to 45 percent.

The major function of facultative ponds is to maintain microalgae-supplied dissolved oxygen in the basin at a high enough level to allow heterotrphic activity (the decomposition and stabilization of organic matter) to proceed at an optimum rate. Typically, FPs are designed to be constructed no closer than 0.3 to 0.6 miles (0.5 to 1 km) from residential areas due to seasonal (typically spring) odor issues. Ideal site locations for FPs are open areas that allow for maximum surface wind sweep over the pond to encourage mixing. The shape of FPs is not important as long as the influent mixes rapidly with the pond supernatant. FPs range in depth from 2 to 5 feet (0.7 to 1.5 m), with a freeboard of 3 to 5 feet (1.0 to 1.5 m) above the high water mark level to accommodate any wave action. A minimum depth of 2 feet (0.7 m) must be maintained to prevent the growth of rooted aquatic plants. Typical loading rates for FPs based on general climate zones is shown in Table 1.

Maturation (MP) or polishing ponds are widely used throughout the world as a final or tertiary wastewater treatment process for effluent quality improvement from secondary biological treatment systems, including FPs. MPs can be expected to reduce total suspended solids (TSS), ammonia, nitrate and phosphorus levels in effluent, but the primary function of MPs in most parts of the world is the removal of pathogenic organisms. A number of mechanisms in MPs are responsible for pathogen reduction, including settlement, natural die off (a function of time and temperature), elevated pH, UV radiation and predation. The design, size and number (usually in series) of MPs are typically based on the desired bacteriological quality of the final effluent. MPs are typically designed at the same depth as facultative ponds (2 to 5 feet (0.7 to 1.5 m)). Retention times in MPs are typically designed at 10 to 14 days for pathogen reduction; however, shorter retention times are required for TSS removal (four to five days) or phosphate reduction (seven to 10 days).

BOD removal in MPs is low due to low initial organic loading concentrations. But MPs are effective, low-cost buffers between secondary biological treatment systems and receiving waters due to their ability to reduce the effects of toxic loads and fluctuations in typical treatment system effluents. MPs differ from FPs in showing less vertical and physio-chemical water column stratification, and remain fully oxygenated during the day. MPs have a more diverse microalgae population than facultative ponds, with the diversity increasing with each pond in the series. Although MPs will feature both suspended and attached microalgae species, non-motile genera tend to dominate. One disadvantage of MPs is that the microalgae population is an additional BOD load that can cause regulatory permit discharge concern as suspended microalgae travel out of the MP with the final effluent.

FPs and MPs are most often used in series and where inexpensive land is readily available. Capital and O&M costs in WSPs are typically lower than other biological wastewater treatment systems, but have substantially higher land area requirements as shown in Table 2.

Unlike the previously described microalgae-based wastewater treatment systems, whose primary and focused function is the treatment of wastewater, High-Rate Algal Ponds (HRAPs) are primarily designed not for optimum treatment efficiency but rather maximum algae biomass production. HRAPs are shallow oxidation ponds specifically designed to encourage the growth of suspended microalgae while using process wastewater as a food source. These systems, which are sometimes constructed as circular, shallow, channeled raceways with low energy-input mixing, have been used throughout the world for wastewater treatment for many years. HRAPs are typically designed at a depth of 8 to 20 inches (20 to 50 cm) with retention of one to three days. An HRAP is kept aerobic by maintaining a high microalgae population and using some form of low-energy input mechanical mixing, such as a slow-turning paddle wheel. Mixing prevents the formation of a sludge layer that could result in anaerobic conditions. Typical loadings for HRAPs in temperate climates average 134 kg BOD ha-1d-1, reaching an optimum summer loading of 366 kg BOD ha-1d-1.

A large body of existing scientific literature shows that HRAPs can achieve high levels of treatment for both domestic and agricultural wastewater as measured by reductions in BOD, TSS, nitrogen, phosphorus and heavy metals. However, as previously stated, HRAPs are primarily designed as microalgae biomass producers that serve as a complementary synergic biosystem to wastewater treatment.

If you have any questions about microalgae or the use of microalgae in wastewater treatment, contact your county?s UGA Cooperative Extension agent.