Anticipating Drought on Rainfed Farms in the Southeast 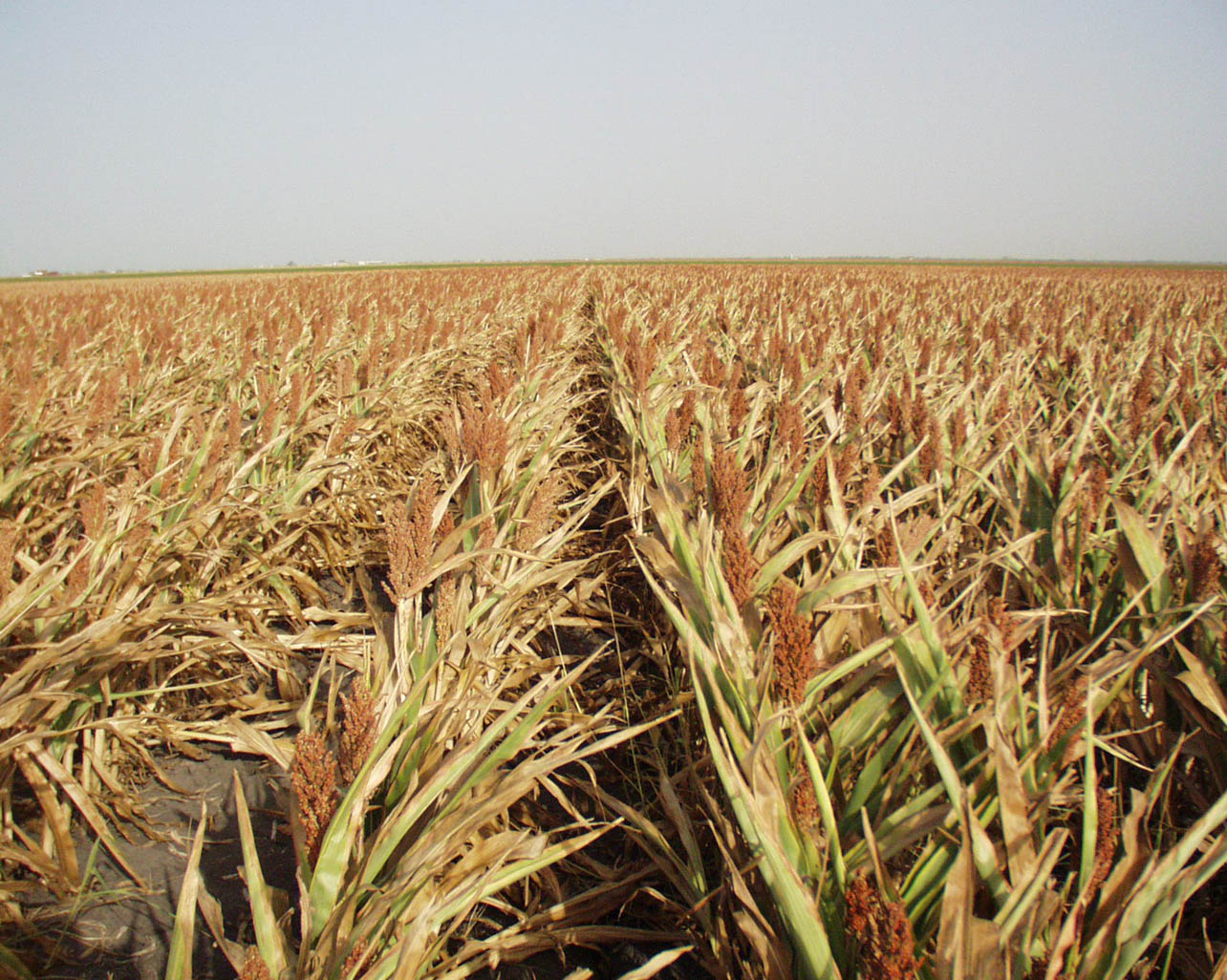 Nobody wants drought, but it's been happening a lot in recent years in the Southeastern U.S. For farmers without irrigation, it may seem that little can be done besides accept what rain comes. However, by paying attention to forecasts and following general practices that help collect and retain moisture, risk can be reduced for all manner of future climate conditions. Here are some ideas for what can be done, centered around two practices: first, knowing what's in store; second, planning ahead.

You'll find resources and examples in the first section below to help assess current conditions and learn about predictions for the future.

The second section gives you ideas for how to use this information to plan for the coming months while building long-term resilience to moisture extremes.

I. Assessing Drought in the Southeastern United States

NOTE: The maps provided here are used as examples only. Visit the website provided with each map to see the most recent version.

The best way to be familiar with the situation on your farm is, of course, to visit your fields regularly and observe crop conditions and moisture levels below the surface. There is enormous variation within regions, states, counties, farms and even individual fields because of soil type, cropping history, localized storms, etc. Summaries of recent weather events in your area and short-term forecasts are available from media sources such as TV, radio, newspapers and the Internet.

Because drought develops over long periods of time, and likewise takes more than a rain or two to alleviate, some of the day-to-day variation is less important. The best resource for accurate drought information is the U.S. Drought Monitor (http://droughtmonitor.unl.edu/monitor.html), which is updated weekly by the University of Nebraska. This resource provides an overall map of the U.S. showing categories of drought and includes a written description of conditions by region. If you click on the Southeast, and then on Georgia, you will see a map that looks like this: 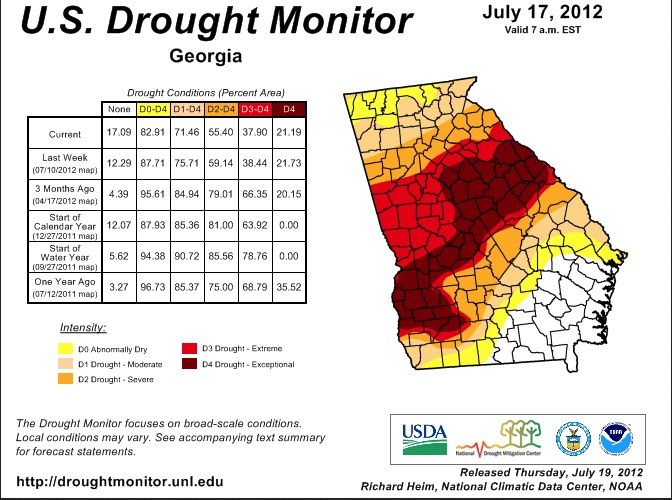 Here you can determine where your county stands and, by looking at the table, see how things have changed in the state over the past year. The map uses colors to represent standard drought categories. For example, white shows those regions with sufficient moisture, and yellow ("D0, Abnormally Dry") indicates an area that is on its way into or out of a drought situation. The accompanying table shows the history of drought for the entire state. For example, on this map, the total area in exceptional drought (right-most column) has stayed the same over the past three months at around 20 percent, while the area under severe drought (orange column) decreased by almost 25 percent over the same period.

Other resources for current drought-related information include:

The Climate Prediction Center at NOAA provides precipitation and temperature outlooks for the coming six to 10 days, eight to 14 days, one month and three months at http://www.cpc.ncep.noaa.gov. An example of a three-month precipitation outlook map from late January 2012 looks like this: 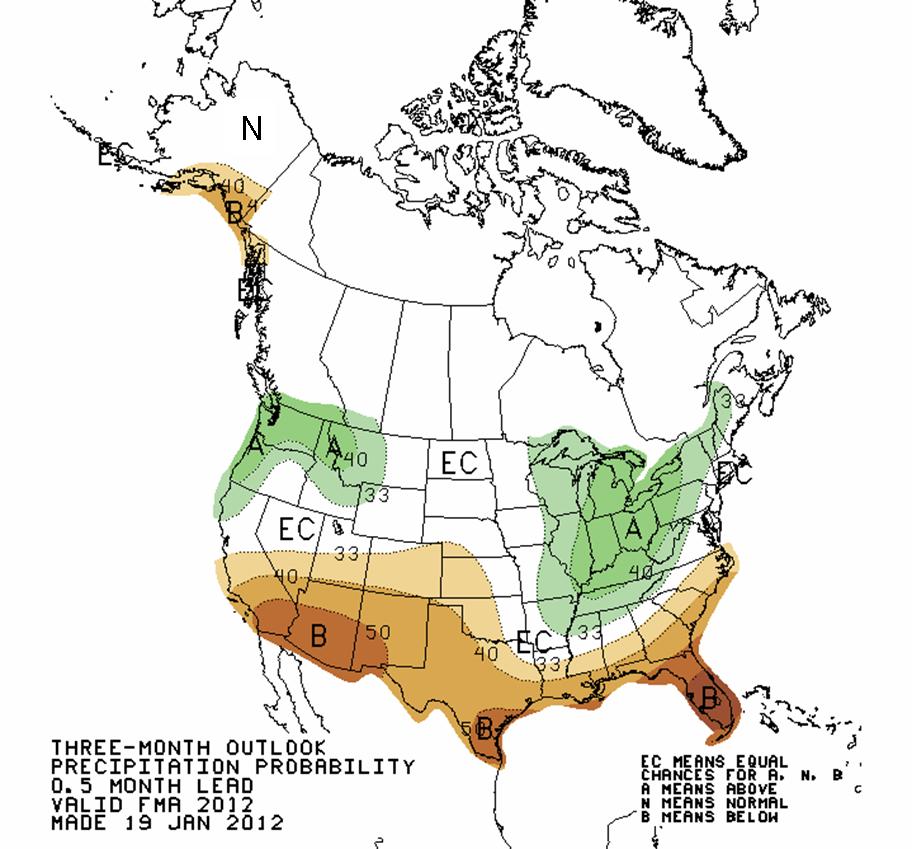 These maps give a rough idea of whether we expect to get a greater or lesser total volume of precipitation than the historical averages. The amount of precipitation anticipated is presented in three broad categories: above normal (A), normal (N) and below normal (B). The map is white and labeled "EC" if there?s an equal chance (33 percent) of these three situations occurring. Color bands are shown if there is more than a 33 percent probability of above normal (green) or below normal (brown) rainfall. The colors become darker with increasing probability, with percentages given at the color boundaries.

For example, on this map north Georgia (white with "EC") has an equal chance of above normal, normal or below normal precipitation; central Georgia (light brown) has a probability (33 to 40 percent) of below normal rain; and south Georgia (darker brown) has a higher likelihood (40 to 50 percent) of below normal rain. South Florida has a greater than 50 percent chance of below normal precipitation. If there is more than a 33 percent chance of normal rainfall, the map is white but labeled "N" instead of "EC," as shown for Alaska. This can be confusing, so be aware that N means that normal conditions are likely, EC means that normal conditions are no more likely than below or above normal — essentially, we can't predict what's coming. Also note that this says nothing about how much more or less rain might fall.

NOAA's prediction of future drought conditions is available by clicking on the U.S. Drought Assessment—Drought Outlook link at the same site, or by visiting http://www.cpc.ncep.noaa.gov/products/expert_assessment/season_ drought.gif for a map like the one shown below, which is revised at approximately two-week intervals. 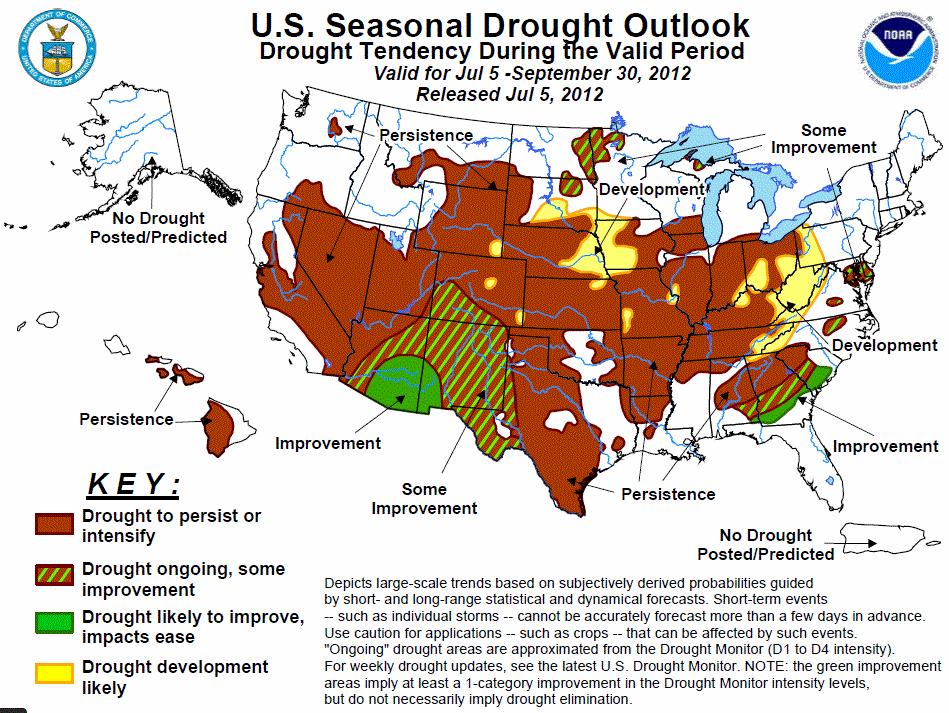 This example, also from January 2012, indicates that the northern half of Georgia should expect the drought to continue and perhaps get worse (solid brown color), with "some improvement" (hatched brown) or "improvement" (green) occurring in the central bands. The white region in the southeast part of the state has not been affected so far, and no development of drought is foreseen.

In Georgia we can sometimes predict winter and early spring conditions many months in advance because we are responsive to the El Niño Southern Oscillation (ENSO) phenomenon. ENSO primarily describes sea surface temperatures in the equatorial Pacific Ocean, which can affect weather globally. When the central and eastern Pacific becomes unusually warm, we have an El Niño situation, which means cool, wet conditions in the Southeast U.S. in winter and spring. When the Pacific is abnormally cool, we get what is known as La Niña, which brings warm and dry weather to the Southeast during this period. The maps below show this trend for precipitation. In Map A, which illustrates rainfall trends in El Niño winters, green shades in south Georgia correspond with rainfall 30-50 mm above normal (indicated in the bar below the maps). The La Niña winter pattern is shown in Map B, where violet and orange colors correspond with various levels of reduced rainfall.

El Niño conditions have occurred in about 25 percent of the years for which we have records. The same is true for La Niña. When neither occurs, it is called a "neutral" condition. This has been the case in the remaining half of observed years. Although there is no clear pattern to El Niño or La Niña occurrences from year to year, the current phase of the ENSO cycle and predictions for the near future may be found at the top of the AgroClimate homepage at http://agroclimate.org.

An El Niño, La Niña or neutral condition that develops in the summer in the Pacific Ocean typically persists through the winter and has predictable effects on Georgia's weather well into spring. This makes it possible to plan for likely drought-related developments. Any water deposited on the ground in the winter that does not run off or percolate into the groundwater will recharge the soil and can only be removed by evaporation or transpiring plants. Low temperatures and dormant plants in winter minimize this loss, so winter precipitation has a profound impact on the following growing season. If a dry winter (La Niña) or a wet winter (El Niño) is likely, this recharge will be altered accordingly.

There is a consensus among climatologists that temperatures have been rising globally since the Industrial Revolution and will continue to rise substantially over the next century. Predictions indicate there will be changes in precipitation, with some regions becoming drier while others become wetter, in addition to a general increased likelihood of extreme weather events such as floods, hurricanes and drought. A summary of current predictions can be found in the synthesis report of the last Intergovernmental Panel on Climate Change (IPCC) assessment at http://ar5-syr.ipcc.ch.

These are general expectations and will vary greatly by region. In Georgia, warming has been minimal over the last 30 years, perhaps due to other factors like land use change. Nonetheless, temperatures are expected to climb over the next several decades, resulting in more summer days with extreme heat. Although current models do not adequately predict changes in precipitation, the most important factor in drought, the ability of climatologists to predict outcomes at more regional and local levels improves every year, as does the understanding of the ways these outcomes interact with land use and other phenomena like ENSO.

In the meantime, the best bet for farmers is to do what works in the short term as well: build resilience. Whatever practices can be undertaken to maintain and improve productivity through a wide range of climate variation, including drought, will always be of benefit.

II. Using the Outlook for Decision-making

Farmers who do not irrigate can use current weather forecasts from sources like the radio, TV, newspaper, the National Weather Service (www.weather.gov) or Weather Underground (www.wunderground.com) to help make day-to-day decisions about planting, cultivating, spraying, cutting hay, etc. But what if the climate outlook for the coming months predicts little rainfall or a La Niña winter, which means the next season is likely to start with a moisture deficit? There are choices you can make that reduce your vulnerability to loss. 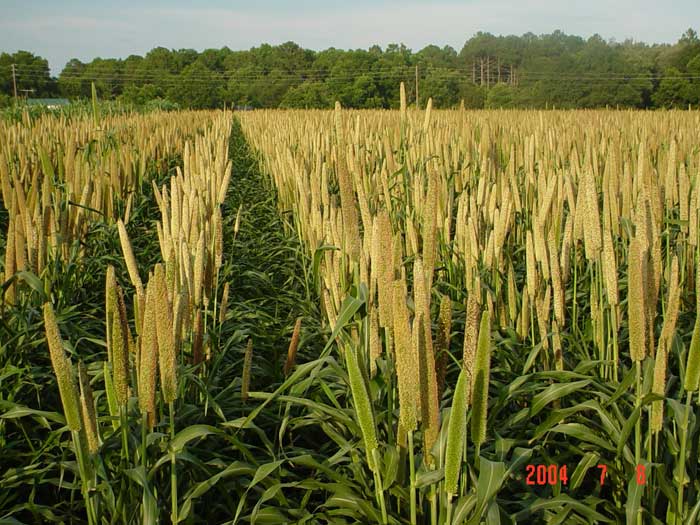 Note: Pumpkin and winter squash vines may wither in drought before the fruit is completely mature. Harvesting at this time makes rot more likely in storage. 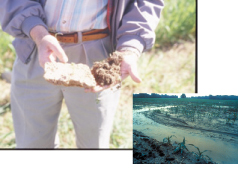 Soil under conservation tillage (above) had lots of organic matter and trapped rain instead of allowing excessive runoff (inset).

Planting cover crops (especially deep-rooted ones) and taking care to work the soil only when conditions are good will build soil organic matter, break up the hardpan, avoid compaction and allow the soil to retain more moisture each year. Difficult hardpans can be eliminated with a ripper or subsoiler. Using the sod-based rotation described below, conservation tillage, or your own system that includes these elements all build soil quality, which has benefits beyond just drought relief, including better nutrient retention, reduced disease and weeds, and greater yields overall.

Drought will occur in the future as it has in the past, and the changing climate will present additional challenges that are difficult to predict. Becoming familiar with the resources presented in this publication will help you be aware of what's in store and allow you to plan ahead for drought. It's all about building resilience to minimize risk and maximize profit on your rainfed farm.

Status and Revision History
Published on Jul 31, 2012
Published with Minor Revisions on Mar 21, 2017