Beef cattle have nutrient requirements in priority order for body maintenance, fetal development, lactation, growth and breeding. The nutrient intake is distributed in the body of the cow to fill these nutrient requirements. As each requirement is filled, the available nutrient is shifted to the next lower priority. The reverse shift is also obvious in beef cows. As nutrient requirements exceed intake, nutrients are shifted from the lower priority requirements to be sure that higher priority requirements are filled. Beef cattle store excess nutrients as body fat. The fat stores are mobilized when the nutrient demands exceed the available intake. In times of severe nutrient restriction, muscle tissue is mobilized once fat and other nutrient stores have been depleted. Researchers have determined that a certain amount of body fat is required for the reproductive system to function. Inadequate nutrition is most often the cause of poor reproductive performance. Developing a nutrition program is easier and more cost effective when all cows on the farm can be managed in a similar manner. This is especially true when all cows on a farm are managed in a single herd, which is often the case with small production units. Calving year-round will make it very difficult to maintain adequate body condition on all cows at the critical times.

Body condition affects both cow and calf performance. Poor body condition is associated with reduced income per cow, increased post-partum interval, weak calves at birth, low quality and quantity of colostrum, reduced milk production, increased dystocia, and lower weaning weights. Increasing post-partum interval will result in a younger, smaller calf at weaning the next year and will result in lower incomes if sold at weaning. Weak calves at birth may not get adequate colostrum and are more susceptible to disease, reduced weaning weights, reduced feedlot performance, and less desirable carcass traits. Research clearly shows that cows in moderate body condition will have a shorter interval from calving to first estrus than cows in thin condition. This supports the conclusion that BCS is one of the most important factors in determining subsequent reproductive performance.

How to Body Condition Score

To properly evaluate body condition for cattle, an observer must be familiar with skeletal structures and with muscle and fat positioning. Although there are several methods available to determine body composition, many cattle producers use a scoring system that involves ranking cattle on a scale. This manuscript will focus on the commonly used scale of 1 to 9, with 1 being emaciated and 9 being obese (Whitman, 1975). 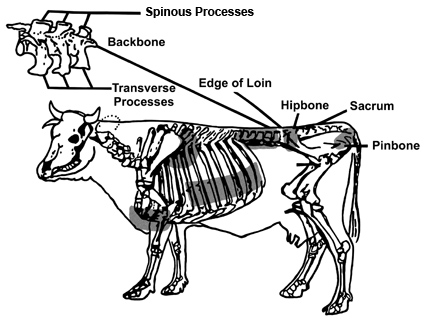 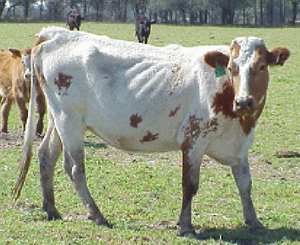 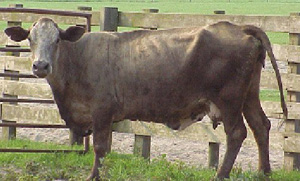 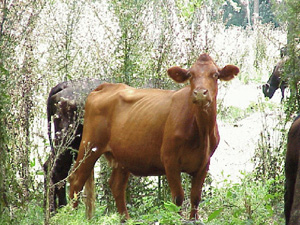 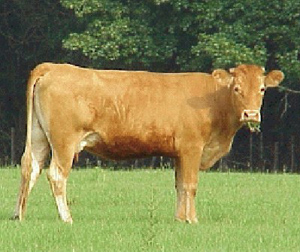 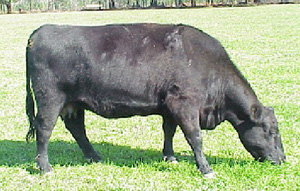 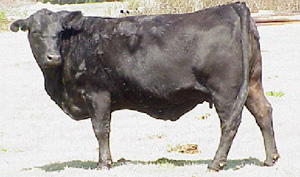 Table 2. Relationship of parity and body condition score to pregnancy rate (%)a.

Table 3 shows the impact of BCS on pregnancy percentage, calving interval, calf performance, calf price and income. Cows in a borderline body condition (BCS of 4) have greatly reduced pregnancy rates, increased calving intervals, lower calf daily gain and greatly reduced yearly income. For example, a cow calving in a BCS of 4 will return an income of approximately $100 less than a cow calving in a BCS of 5. If BCS is taken 90 days prior to calving, the cows in borderline condition can be properly supplemented to achieve a BCS of at least 5 at calving. In most cases supplemental feed costs will be approximately $25 to $35 for feed that costs $100 to $150 per ton. This is far less money spent on feed than would be lost if cows were allowed to stay in a BCS of 4. The impacts are even greater for a BCS of 3 and is a condition that should never happen with any of the cows in the herd.

When to Evaluate Body Condition

Many beef producers are involved in diversified farming operations. These operations may combine cattle with row crops, poultry houses, timber and many other time consuming production practices. Regardless of the combination, additional obligations may limit the amount of time producers can spend evaluating body condition. However, neglecting to properly observe and record body condition can have a substantial impact on overall productivity and profits.

To properly identify cattle that have increased nutritional needs, producers should evaluate body condition as often as possible, but a minimum of three times (weaning, 90 days pre-calving and breeding) per year is preferred. Cattle that are calving should have enough body condition to allow for a reduction in body mass due to weight being lost during the parturition process and fluids being displaced. Body condition score at calving time provides the best prediction of re-breeding performance. Evaluating BCS approximately 90 days prior to calving allows sufficient time to adjust the feed ration to ensure cows are in adequate body condition at calving.

Evaluating body condition at weaning can be useful to determine which cows or heifers need the most gain prior to calving. Since calves will no longer suckle, lactating cows will be able to dry off and add needed weight before calving. The time period from weaning to calving has proven to be the easiest and most economical time to add condition to cattle. Producers who fail to evaluate body condition and adjust the nutritional needs of the cow herd after weaning may have difficulty adding condition later in the production cycle.

90 days Prior to Calving

Assessing body condition 90 days prior to the beginning of the calving season may be useful in preventing extended periods of anestrus. This score may be taken at weaning in herds that delay weaning until calves are 8 to10 months of age. However, weaning calves at least 90 days prior to the start of the calving season is recommended. Cow nutritional requirements are greatly lowered when non-lactating and should allow the cow to achieve adequate body condition at calving with minimal supplemental feeding. Nutrition can then be adjusted for cattle that receive body condition scores of less than 5 after this assessment. Although changes in weight can be achieved, take care to prevent excessive weight gain immediately prior to calving. Cows should be fed to calve in a BCS of 5 to 6 and heifers a BCS of 6.

The calving season in Georgia varies widely among cattle operations, but most calves are born from September through March. Calving season has a large impact on phase of the cow’s yearly production cycle in which body condition score is most likely to be deficient.

In the southeast, cows calving in the fall months are likely to have adequate body condition score, so the winter feeding period usually begins shortly after the calving season begins. Therefore, cows are lactating throughout the winter feeding period. Increased demands of lactation and declining feed quality during the fall months often causes inadequate body condition by the start of the breeding season, which begins in early- to mid-winter. The majority of producers feed hay as the base diet during this period. Hay will likely require supplementation and the hay feeding period may last throughout the breeding period for cows calving during the fall. In contrast, cows calving in late winter will be in late gestation and early lactation during the winter feeding period. Body condition score at calving will have to be monitored more closely than fall calving cows as the cows will be fed hay through most of the last trimester. Cows will likely be fed a hay based diet that requires supplementation during the early lactation period. However, supplementation can cease when hay feeding stops and grazing becomes available. Cows should be able to increase body condition score when grazing lush spring growth of fescue, ryegrass, or small grain pasture.

Body condition scores of cows must be determined prior to the beginning of a supplemental feeding program. Body condition score has a significant impact on the requirement for energy but only a small effect on the protein requirement. Many supplementation programs focus only on supplemental protein and fall short of providing enough energy to maintain an adequate BCS. Energy rather than protein is often the most limiting nutrient in Georgia forages.

To increase body condition, the first step is to determine how many pounds a cow needs to gain to reach the desired BCS. To increase one condition score, a cow needs to gain about 75 pounds. A dry pregnant cow would need approximately 375 pounds and a lactating cow 575 pounds of TDN (Total digestible nutrients) above maintenance to increase one body condition score in a 75-day period. This would equate to approximately 6.5 pounds of corn per day for a dry pregnant cow and 10 pounds of corn per day for a lactating cow.

The next step is to determine if the feedstuffs available on the farm will support this gain. For example, a nutrient analyses indicate