Much attention has been placed on the potential negative environmental impacts of grazing; however, grazing can be a powerful tool for improving pasture health and productivity. This has been realized for many years. In fact, Aldo Leopold listed the ax, plow, cow, fire and seeding as potential renovation tools in the early 1900s. These tools have changed little over the years and are as effective today as in the early 20th century. Grazing diminishes the competitive ability of plants like broomsedge and johnsongrass and improves the competitiveness of bermudagrass, bahiagrass and even clovers. Improper grazing, on the other hand, can decrease the competitiveness of desirable species like orchardgrass or switchgrass and encourage undesirable weedy species.

Why Does Grazing Alter Plant Composition?

Defoliation can be an effective herbicide and can be segregated into two types: non-selective and selective. An obvious example of non-selective defoliation is mowing or "bush hogging," since all plants are clipped to the same height. Taking advantage of animals' selective grazing greatly increases the effectiveness of defoliation by "mowing" only certain plants. Repeated removal of top growth of preferred "weeds" like johnsongrass can provide a more effective and selective control than mowing. A dramatic example of the effectiveness of selective grazing involves goats. These animals prefer browse and many weeds like honey-suckle, blackberry and curly dock and can completely remove some broadleaf species from continuously grazed areas while ungrazed grass species thrive (Figure 1). 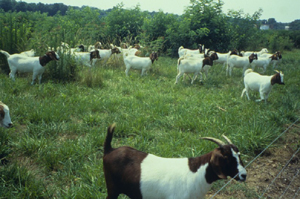 Figure 1. Goats prefer high quality browse like honeysuckle, briars and other weedy species and, over time, can completely eliminate them from pastures.

Why does uniform or non-selective grazing discourage growth of some plant species and encourage growth of others? In other words, why are some plants more tolerant of grazing than others? The answer to this question depends on plant species and is not easy to answer. Possible reasons include (1) differential root storage of carbohydrates, (2) altered rooting depth, (3) improved light penetration (4) higher tolerance to treading or (4) redistribution of nutrients from grazing.

Carbohydrates stored in roots are the "savings account" of many forage plants. They are energy stores used for winter survival and regrowth after defoliation. Plants species differ in root storage characteristics. For example, bahiagrass has large rhizomes (Figure 2) that store large amounts of carbohydrates for regrowth. These energy stores are quickly replenished because bahiagrass has a low growth habit and leaves are located close to the ground. Johnsongrass also has large rhizomes to store carbohydrates, but when defoliated use most of this stored energy to produce large upright leaves. Under continuous grazing, cattle typically select johnsongrass over bermudagrass and constantly remove regrowth. This frequent leaf removal does not allow root reserves to replenish. With continuous "withdrawals" from the carbohydrate savings account to produce new leaves and no "deposits" the plant eventually runs out of energy and dies. 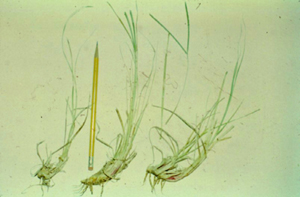 Broomsedge is also sensitive to frequent defoliation, particularly in early spring when new growth is palatable to grazing animals. Heavy spring grazing can penalize broomsedge in pastures and favor growth of grazing-tolerant grasses like bermudagrass. Of course, soil pH and nutrients must also be adequate for growth of these more productive forages. Why doesn't haying or mowing kill broomsedge or johnsongrass? The reason is simple -- plants have ample time to replenish root carbohydrates in the period between cuttings.

Overgrazing also affects root depth and in turn decreases competitiveness for water. Plants that are grazed preferentially and continuously for long periods of time will likely have shallower root systems than ungrazed plants. This gives ungrazed plants an advantage in rooting depth and may, over time, alter the composition of plant species in a pasture. 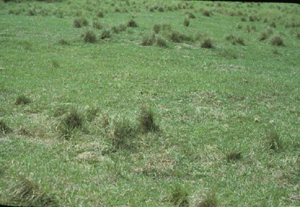 Figure 3. A closely grazed bahiagrass pasture. Note that smutgrass has not been consumed by cattle and likely has a competitive advantage for light and water.

Most people think of trees when effects of shading are mentioned; however, shading also occurs in under-grazed pastures. Light availability is critical to the survival and competitiveness of many forage species. Light is the energy that fuels the plant factory.

The prostrate leaves of legumes and forbs intercept sunlight and can shade out lower growing grasses and seedlings. The upright growth habit and broad leaves of red clover, alfalfa and chicory can shade out even aggressive species like bermudagrass if fields are not defoliated often. Conversely, low growing white clover can be sensitive to shading in undergrazed tall fescue and bermudagrass since little light will reach the ground level where it is needed by clover.

In some situations light availability can improve competitiveness of clovers (Figure 4). White clover is able to regrow rapidly from ground level buds and intercept large amounts of light with flat broad leaves. This allows certain types of white clover to dominate closely grazed tall fescue pastures. There are several other instances where grazing, mowing or burning can "release" light to lower portions of the canopy and improve plant performance and persistence. 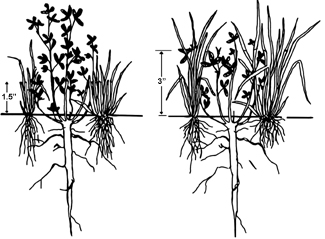 Another practical example of shading occurs in dormant bermudagrass or bahiagrass pastures that are overseeded with winter annuals. Rye, wheat, oats, ryegrass, arrowleaf clover and crimson clover are all sensitive to low light levels. Closely grazing residual bermudagrass or bahiagrass to a 1-2 inch height before planting winter annuals increases the light available to seedlings and improves fall and early spring forage production (Figure 5). 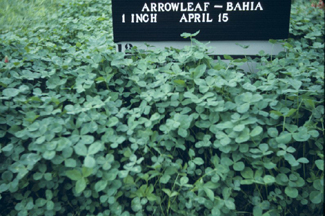 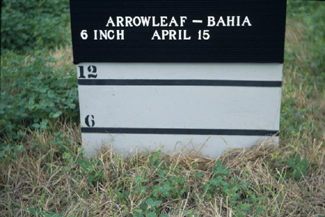 Grazing and light also increases growing points present on the lower portions of plants and can improve regrowth rates. In a central Alabama study in which arrowleaf clover was harvested twice a week to simulate grazing, a significant number of buds remained below "grazing" height. Arrowleaf clover allowed to grow unharvested had many more buds in the upper portion of the canopy where sunlight was available. Growing points near ground level on the harvested arrowleaf clover allowed rapid regrowth following harvest and would likely sustain forage growth longer in the spring than unclipped arrowleaf clover (Figure 6). Harvesting tall fescue for hay at the proper maturity (boot to soft dough stage) also exposes lower portions of the plant to light and encourages rapid tillering and regrowth. Timely grazing or mechanical harvest removes older, lower quality, less efficient leaves and improves overall forage regrowth potential and quality. 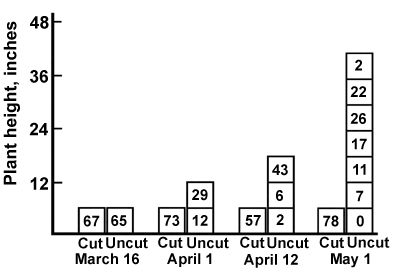 Crown forming legumes like alfalfa and red clover generally have less treading tolerance than white clover. Because legumes are more sensitive to treading damage, species composition of pastures can shift toward grasses, particularly under heaving "pugging" conditions. Damage from treading is typically higher on heavy clay soils and is greatly increased under high soil moisture conditions, regardless of soil type.

Pasture composition can also be altered by nutrients returned in animal excreta. Dung (high phosphorous content) and urine (high nitrogen content) stimulate growth of clover or grass respectively. In an experiment where sheep grazed a mixture of white clover and perennial ryegrass, returning urine and dung to pastures increased overall forage production by more than 20 percent (Figure 7). Note that excreta return did not effect the growth of ryegrass or white clover equally. Ryegrass production in the pasture roughly doubled when urine and dung were returned while white clover production decreased. 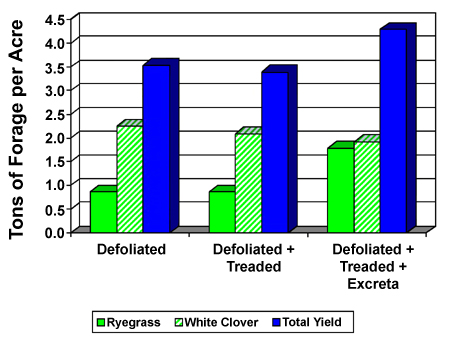 Figure 7. Effect of defoliation, treading and excreta return to pastures on yield of perennial ryegrass and white clover pastures stocked at 10 sheep per acre. (Adapted from Currl and Wilkins, 1981.)

While it is difficult to influence the quantity of dung and urine that animals return to pastures, it is possible to alter the distribution of these nutrients. In continuously grazed pastures, high concentrations of nutrients are typically deposited near water or shade where animals congregate. A study examining the effects of grazing intensity on nutrient distribution was recently conducted by the University of Missouri. In this study, increasing the number of paddocks in a rotational system improved manure distribution and decreased the amount of time required to deposit one manure pile per square yard of pasture from 27 years to 2 years (Table 1).

While concepts above appear simple, remember that balance must be achieved between light, forage quality, root carbohydrate reserves, treading, and nutrient distribution to improve the plant and animal performance from various forage species. Awareness of these concepts should help graziers assess the impacts of certain grazing practices for their farms. No "one size fits all" solution exists for all farms.

Animals can be an effective and economical pasture renovator. Some useful examples appear below.

Overall farm management can be improved if producers view pastures from the plant perspective when animals are grazed. This perspective encourages the implementation of sound grazing management practices and improves both animal and plant performance.