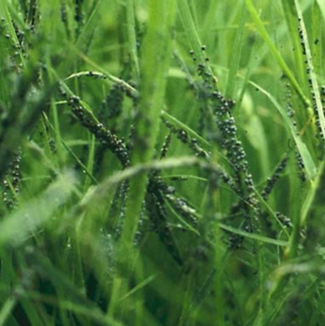 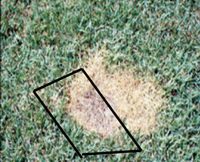 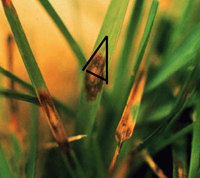 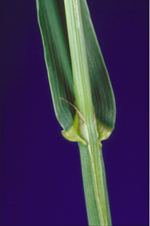 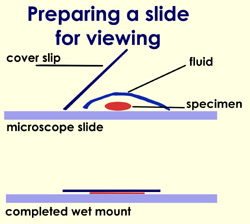 A. Distinct patches of yellow to brown colored grass are present.

B. Distinct patches are absent.

All species of warm- and cool-season turfgrass. Georgia has seen cases in Tall fescues, Bentgrass, Bermuda hybrids and Centipede.

Symptoms of dollar spot includes sunken, circular patches that measure up to several inches on turfgrass. The patches turn from brown to straw color and may eventually coalesce, forming irregularly shaped areas. Infected leaves may display small lesions that turn from yellow-green to straw color with a reddish-brown border. The lesions can extend the full width of the leaf. Multiple lesions may occur on a single leaf blade. Mycelia may be present.

Dollar spot is favored by temperatures between 60 °F to 85 °F and continuous high humidity. This disease is particularly favored by warm days, cool nights, and intense dews. When the disease is severe, it also infects turf growing in areas with low levels of nitrogen and in dry soils. 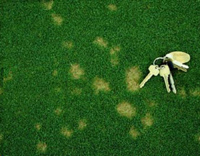 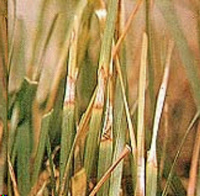 All species of warm- and cool-season turfgrass. Particularly damaging in Centipede and St. Augustinegrass in south and coastal Georgia

Fairy ring symptoms vary with causal agents. Above-ground mushroom and puff ball basidiocarps may or may not occur. Typically, this disease has outer rings that are either dark-green or brown in color. The shape and size of the rings vary depending on the species. Activity in the turf ceases when the individual rings come in contact with each other. Some causal agents form fruiting bodies, but do not form rings. Conversely, other causal agents will form rings, but not fruiting bodies. Fairy rings are sometimes responsible for causing hydrophobic areas similar to localized dry spots.

While fairy rings typically occur in the summer, this disease can also occur on cool-season turfgrass in mild winter climates.

St. Augustinegrass, Bermudagrass and Centipedegrass. Bluegrass and Fescues are rarely affected in Georgia.

Take-all patch causes wilted, circular patches that are brown or bronze-colored and measure up to several feet in diameter. Infected plants have dark-brown roots.

Take-all root rot typically occurs in wet conditions and in areas with a high soil pH — most severe at pH 6.5 or above. This disease is more severe on less fertile and sandy soils.

Strands of darkly pigmented, ectotrophic, runner hyphae can be seen on roots, stolons, and rhizomes both with the dissecting and compound microscope. Infection hyphae originate from lobed hyphopodia.

These are the most frequently diagnosed diseases on turf samples at University of Georgia Disease Clinics.

Brown Patch: The symptoms of brown patch can vary depending on the grass cultivar, climatic and atmospheric conditions, and soil management of the turfgrass. This disease typically causes rings and/or patches of blighted turfgrass that measure 5 inches to more than 10 feet in diameter. It also causes leaf spots and "smoke rings" — thin, brown borders around the diseased patches that appear most frequently in the early morning. After the leaves die in the blighted area, new leaves can emerge from the surviving crowns. On wide bladed species, leaf lesions develop with tan centers and dark brown to black margins.

Large Patch: Large patch occurs during the spring and fall, when warm-season turfgrasses are entering or exiting their period of winter dormancy. Circular patches of diseased turf are observed, ranging in diameter from less than 3 ft. up to 25 ft. Leaves of recently infected turf, located at the periphery of the patch, may appear orange in color. Some patches may be perennial, recurring in the same location and expanding in diameter year after year. In contrast to brown patch, R. solani infection of warm-season grasses occurs on the leaf sheaths, where water-soaked, reddish-brown or black lesions are observed. Foliar dieback from the leaf tip toward the base occurs as a direct result of these leaf sheath infections.

Rhizoctonia produces distinct mycelia with three characteristics for diagnostics. Rhizoctonia always has septate hyphae that branch at 90-degree angles, constrictions at the base of the branching, and is tan to light brown color. 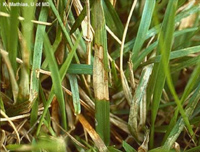 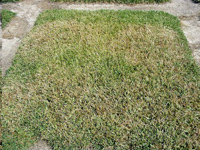 Rust diseases initially cause light-yellow flecks on the leaf blades and sheaths. The flecks enlarge, elongate, and turn yellow in color. The infected areas raise above the epidermis and then rupture, releasing spores that are yellowish-orange to reddish-brown in color. The leaf blade turns yellow starting at the tip and progressing to the base. A severe disease infection can cause the shoot to turn yellowish to reddish-brown in color and slow in growth. As individual plants die, the turf thins.

Rust diseases typically occur in early spring through mid-summer, depending on the location of the turf. Rusts favor moist, low-light areas. Depending on the species, rusts favor temperatures between 65 °F and 85 °F. Severe rust infections occur on slow-growing turfgrass particularly those with low nitrogen levels and/or plant water stress.

Teliospores of Uromyces and Puccinia are one- and two-cells respectively. Spores are orange-red in color and circular to ovoid in shape. 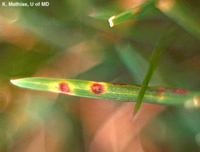 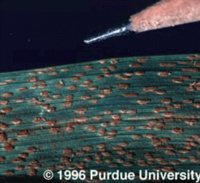 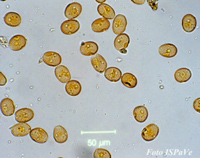 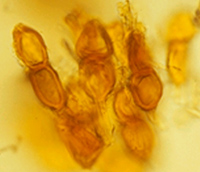 Leaf spot symptoms include purplish-brown to black spots with tan centers on the leaf blade and sheath. The lower leaves of the infected plants become shriveled and blighted. Severe leaf spot can lead to melting-out when leaves and tillers are infected, causing severe thinning of the stand. On cool season turfgrass, melting-out typically follows the appearance of leaf spots.

Disease occurs at temperatures between 40 °F and 80 °F in areas that experience more than 10 hours a day of foliar wetness for several consecutive days. The disease is favored by high amounts of nitrogen and a low mowing height.

Conidiophores are light to darkly pigmented. Conidia vary from curved with three vertical septations to multi-celled, ovoid and cylindrical. 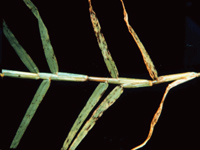 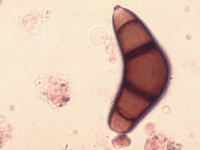 The symptoms of gray leaf spot vary depending on the grass cultivar. On St. Augustinegrass, gray leaf spot first appears as small, brown spots on the leaves and stems. The spots quickly enlarge to approximately ¼ inch in length and become bluish-gray in color and oval or elongated in shape. The mature lesions are tan to gray in color and have depressed centers with irregular margins that are purple to brown in color. A yellow border on the lesions can also occur. In cool-season turfgrass, the symptoms are similar to those of melting-out.

Gray leaf spot is favored by daytime temperatures between 80 °F to 90 °F and night temperatures above 65 °F. It is also found in areas with high nitrogen levels and that are stressed by various factors, including drought and soil compaction. This disease is most severe during extended hot, rainy and humid periods. 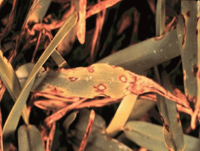 Anthracnose typically infects turfgrass during warm weather. It causes irregularly shaped patches that are yellow to brown in color. Leaf lesions that are yellow with black centers may also occur. Anthracnose also causes a basal stem and leaf sheath rot during cool, wet weather in the spring and warm, moist weather in the summer. Infected shoots are easily detached. The dead foliage and stems become covered with acervuli — tiny, spined, black fruiting bodies — which require magnification to identify.

Anthracnose is favored by temperatures over 78 °F. It occurs in areas that experience more than 10 hours a day of leaf wetness for several consecutive days. Soil compaction and low amounts of nitrogen fertility may enhance the severity of this disease.

Long black setae may be seen with the dissecting and compound microscope. Simple conidiophores produce colorless to pink conidia that are single celled, short, and ovoid to cylindrical. Conidia may also be slightly curved.

Large numbers of pinhead-sized fruiting bodies may suddenly appear on grass blades and stems in circular to irregular patches 1–30 inches in diameter. Affected patches of grass do not normally die or turn yellow and signs of the fungi usually disappear within 1 to 2 weeks. These fungi normally reproduce in the same location each year. The fungi are not parasitic, but they may shade the individual grass leaves to the extent that leaves may be weakened by inefficient photosynthesis.

Slime molds are favored by cool temperatures and continuous high humidity. An abundance of thatch favors slime molds by providing food directly in the form of organic matter.

Pythium root rot: Pythium root rot is common on highly maintained turf. Although symptoms of pythium root rot are typically nondistinctive, this disease can appear as yellow, irregularly shaped patches. The affected turfgrass is thin, off-color and slow growing, while the root system is stunted with reduced volume and vigor. Foliar mycelium does not occur.

Pythium Blight: Mostly in tall fescue and Bentgrass. Pythium Blight appears as yellow, irregularly shaped patches. The affected turfgrass is thin, off-color and slow-growing, while the root system is only slightly stunted, with reduced volume and vigor. Foliar mycelium does occur.

Some Pythium species favor temperatures between 32 °F and 50 °F while others thrive in temperatures between 70 °F and 90 °F. Pythium root rot occurs in areas with high soil moisture, poor drainage and low light. Disease can be severe in locations with low mowing height and excessive wear. Pythium blight does not cause major damage below 70 °F.

Oospores and sporangia are diagnostic for Pythium root rot. Oospores are thick, double-walled, and completely round. They can be seen inside or outside of tissue. Pythium sporangia can be easily confused with those of Phytophthora, which are lemon-shaped. 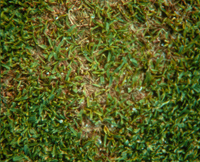 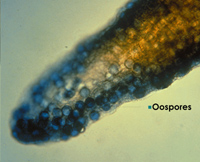