There are several advantages to consider when following an estrous synchronization protocol, including: 1) shortening the calving interval, which allows females (especially heifers) to conceive earlier in the breeding season; 2) more effectively using AI and embryo transfer to reduce time and labor in detecting estrus (heat); and 3) producing a more uniform calf crop with similar ages.

Estrous synchronization will not substitute for lack of nutrition, herd health or poor herd management; therefore, it is not effective in non-cycling females.

Numerous estrous synchronization protocols have been developed that use a combination of different drugs and products to alter hormonal changes in the female's estrous cycle. Since different reproductive hormones are used in estrous synchronization, developing a basic understanding of several reproductive hormones is helpful for determining which protocol will work best for your herd.

Progesterone, prostaglandin, gonadotropin releasing hormone (GnRH), follicle stimulating hormone (FSH) and luteinizing hormone (LH) are a few of the hormones involved in the estrous cycle (see Figure 1). Depending on the protocol, these hormones can be used independently or in combination with one another.

Progesterone is a hormone used to maintain pregnancy. Progesterone can be given in the natural (progesterone) or synthetic (progestin) form. Both can be used to synchronize estrous in cattle.

When the female ovulates, the site of ovulation develops a structure known as a corpus hemorrhagicum, which quickly (within four to seven days) develops into a corpus luteum (CL). The CL is the primary progesterone source in the bloodstream. As the CL matures, progesterone concentrations increase and remain elevated throughout pregnancy or the estrous cycle (see Figure 1) until the female either calves or is not pregnant. If she is not pregnant within 15 to 18 days of a normal cycle, prostaglandin is synthesized and released to regress the CL. Understanding that progesterone concentrations are elevated for most of the estrous cycle and knowing how they are reduced is useful when selecting an estrous synchronization protocol.

An example of a progesterone product used in estrous synchronization protocols is a CIDR(TM) (controlled internal drug releasing device). CIDR(TM)s are T-shaped flexible silicone and nylon devices containing progesterone. When inserted in the vaginal tract, it releases progesterone at a constant rate. The CIDR(TM) is approved for use in suckled beef cows and replacement beef heifers.

Prostaglandin is a naturally occurring hormone approved for use in beef cattle in 1979. Prostaglandin is naturally produced by the uterus and terminates the normal cycle when a cow is not pregnant. This allows the cow to return to heat, ovulate and start a new cycle. Prostaglandins will synchronize heat only if cows are cycling; however, they are not effective on all days of the estrous cycle. Several economical prostaglandin products are available by prescription from a veterinarian.

FSH is released from the pituitary and affects the ovary. It helps stimulate follicular waves and can be manipulated in embryo transfer programs to initiate super ovulation.

LH is secreted in pulses into the bloodstream and, immediately before ovulation, surges to cause ovulation of the dominant follicle on the ovary. LH is key for ovulation.

Numerous estrous synchronization protocols have been developed, and scientists around the world continue to analyze each protocol's effectiveness. The Beef Reproductive Task Force, composed of Extension animal scientists from several universities, has established both beef and heifer synchronization protocols based on available research and field use that work best for beef cattle producers. 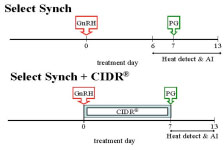 Both of these are protocols approved for use in cows, including the CIDR(TM)s recommended when more cows are likely to be anestrous and/or when heat detection prior to PG is not feasible. With Select Synch, 5% to 20% of the animals may show heat 1.5 to 2 days before PG. Both protocols could be applied to the same group of cows, with CIDR(TM)s selectively placed in young, thin or late-calving cows. 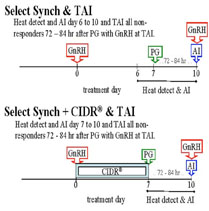 Reduces time spent on heat detection. Early responders have a better chance of conceiving compared to a single, fixed-timed AI. 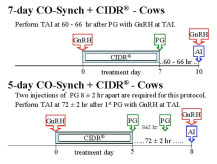 This protocol is recommended for both cows and heifers. Cows should be inseminated between 60 and 66 hours after CIDR(TM) removal. Insemination time for heifers is recommended at 52 to 56 hours after CIDR(TM) removal. A shortened 5-day CO-Synch + CIDR(TM) protocol is another option for cows. Two full doses of PG given eight hours apart are critical for success in the shortened protocol.

A single injection of PG can be used on heifers. Results of this protocol may vary, and synchrony may be less than expected.

Both of these methods are recommended in heifers. Feeding MGA(TM) is specifically approved for estrous suppression in heifers only.

In heifers, the MGA(TM)-PG and Select Synch + CIDR(TM) protocol can be used to combine heat detection and timed AI. When feeding MGA, refer to label rates to determine proper amounts. 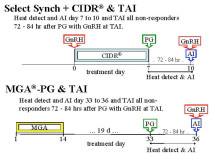 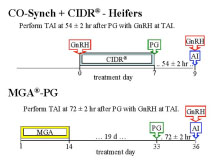 This can be used with fixed-time AI in heifers; however, pregnancy rate will likely be lower than with the CO-Synch + CIDR(TM) protocol.

When using PG and/or GnRH, follow label instructions for dose rates, which can vary depending on the protocol selected.

This protocol is the most recent fixed-time AI option for heifers. Results have been promising but need to be balanced with the five handlings needed to complete the protocol.

Developing an understanding of the estrous cycle and reproductive hormones used in estrous synchronization protocols can be very useful when trying to determine which protocol will work best for your operation.

Although the estrous synchronization protocols outlined in this publication have been proved in many breeding operations, there may be others that can be used successfully.

If you have questions regarding estrous synchronization, contact your local county Extension office, veterinarian or Extension beef specialist for further information.

Trade or brand names are mentioned only for information. The authors intend no endorsement or imply discrimination to the exclusion of other products.