Performing arts is one of the most popular projects in the Georgia 4-H Program. Clovers & Co. was established to provide 4-H’ers with an opportunity to share their talents with others. First established in 1981, Clovers & Co. is celebrating its 41st anniversary this year. Young people from around the state auditioned for this group in June. More than 700 4-H’ers have been members of Clovers & Co. during its 40 year history including Grammy Award Winning Country Music Star, Jennifer Nettles. Washington County has been well represented in Clovers & Co over the past several years.

Clovers & Co. provides a great opportunity for Kennedy to mature as a performer and develop skills in leadership, showmanship and teamwork.  We congratulate Kennedy on her Clovers & Co. selection and success.

For more information on 4-H and Clovers & Co., please Washington County Extension at 552-2011 or visit the Georgia 4-H page at www.georgia4h.org. 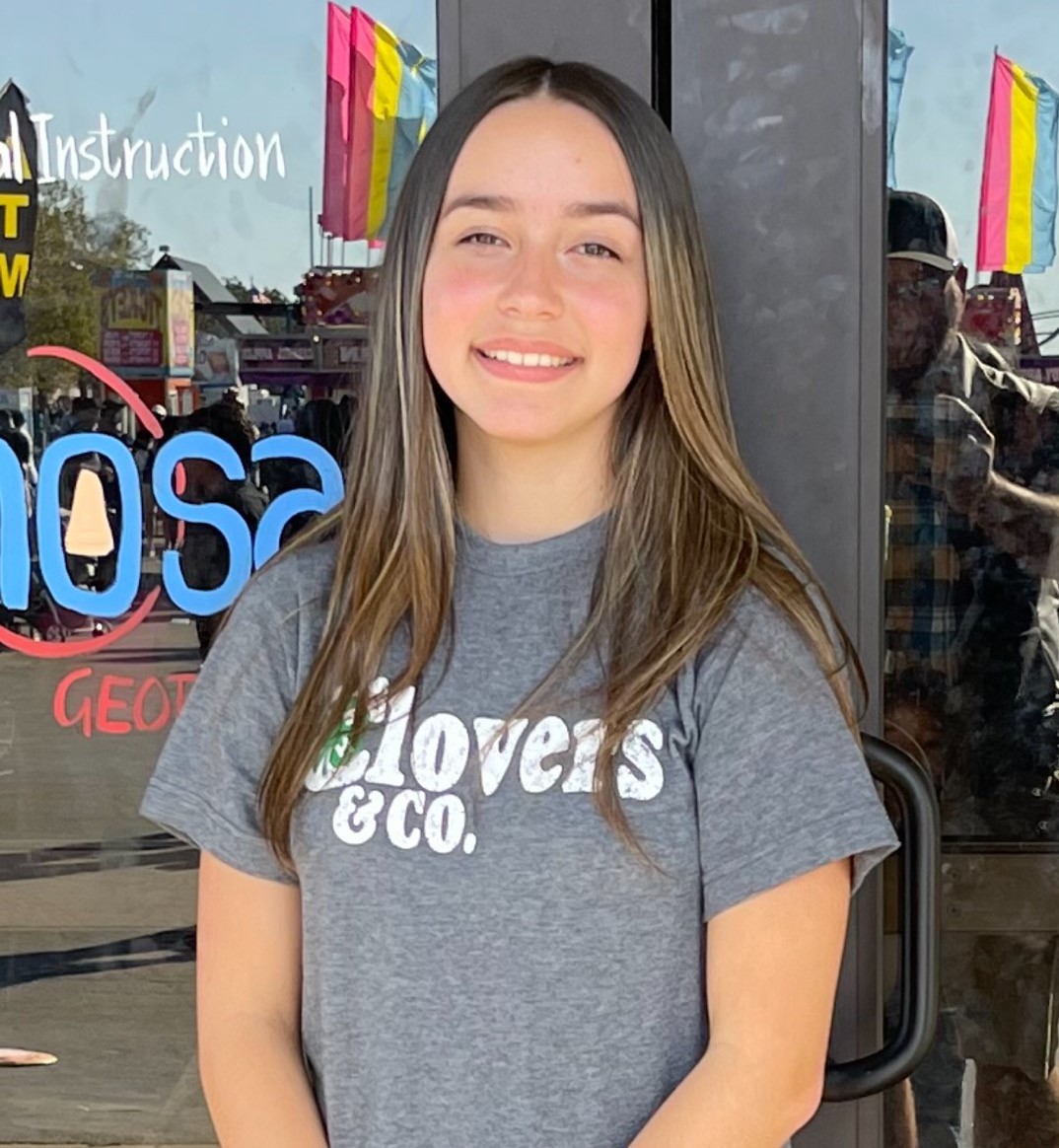 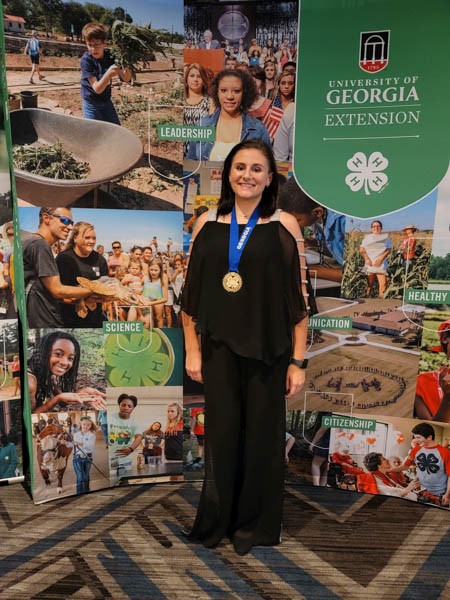 One of the major highlights of the Georgia 4-H year, State 4-H Congress, was held July 20-23 at the Crowne Plaza Ravinia in Atlanta. District winners from all over the state gathered to compete in the 78th annual Georgia 4-H State Congress. In order to compete at the state level, a 4-H’er must first exceed at district competition.

State 4-H Congress competitors gave 12 minute presentations and prepared portfolios to demonstrate what they have accomplished in their project area, leadership and citizenship. Expert judges evaluated their work and also interviewed the competitors.

“4-H State Congress is truly one of the greatest moments, whether you win the first-place medal or just have memories to tell. I want to encourage other Washington County 4-H’ers to come and dream big with 4-H, to have these opportunities I've been able to have, to tell their memories and achievements and to make the best better.” said Geena.

We thank you Geena for representing Washington County 4-H through your hard work and dedication. Congratulations Geena!

For more information about 4-H or to become a volunteer, please contact the Washington County Extension Office at 552-2011.

Dr. Kitchens started the Washington County Shotgun Team in 2012 and it has grown tremendously over the years due to his passion and dedication to 4-H and the youth of Washington County. He has worked diligently with the county to obtain the county landfill to make the 4-H Shotgun Range possible.

He has been responsible for raising thousands of dollars through grants annually to help keep the cost down for team members and to purchase much needed equipment for the new range. Dr. Kitchens and the team of coaches have also raised money through donations to cover expenses such as shells and the cost of registration for competitions. The Washington County 4-H Shotgun Team has also been responsible for hosting one of the four district qualifying matches each year with more than 175 youth participants thus raising money for the team as well.

This year the Washington County 4-H Senior Team won at the State Trap, Skeet and Sporting Clays Match and advanced to Nationals where they finished in 5th place overall and 4th place in Sporting Clays. Dr. Kitchens along with the team of coaches raised money within a two week time span to cover the expense of the trip to nationals and new machines for the team, further improving the shooting experience locally.

Dr. Kitchens serves as a county advisory board member for 4-H where he plays an active role and serves as an advocate for the Washington County 4-H Program. He has also served on the Project S.A.F.E. Shotgun Advisory Board the past three years. 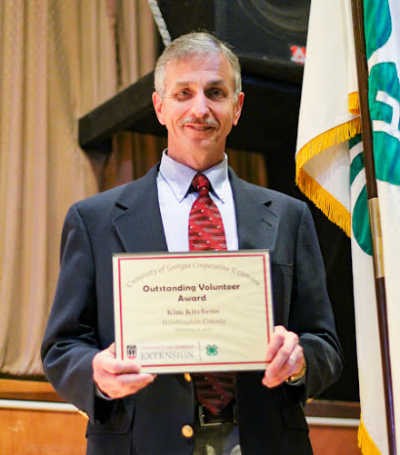 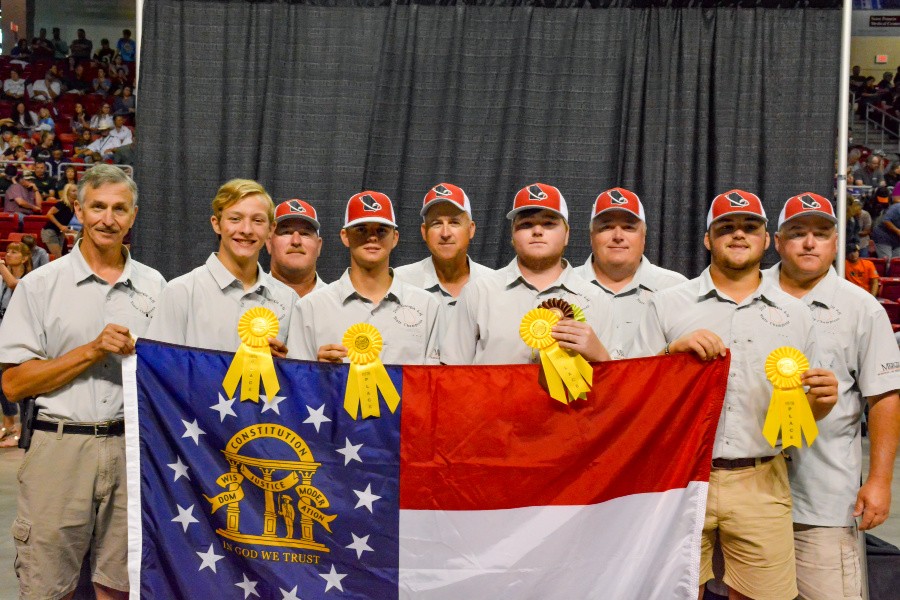 The Washington County 4-H S.A.F.E. Shotgun Team members consisting of Bryan McAfee, Elliott Price, Christopher Kitchens, and Tyson Clark won the 4-H State Championship in Skeet, Sporting Clays, and Trap on Memorial Day weekend at Savannah. The team advanced to the 4-H National Championship in Grand Island, Nebraska, June 23-28. Nearly 700 youth from 36 states competed in the nine disciplines, and the shotgun team competed in sporting clays, skeet, and trap.  The competition was intense and the teams were challenged by the high winds of the plains state.

We are appreciative for the financial support of our donors and the encouragement from our community. Our team is excited about the upcoming year, and hopes to repeat our success in the future.

We would like to thank all of the wonderful coaches that have helped the team to achieve attending the nationals. We would like to acknowledge the following coaches and their families who traveled to Nebraska for the 4-H National Championships: Dr. Kim & Mrs. Layne Kitchens, Jamie Clark, Tim Franklin, Todd & Stephanie McAfee and Wesley & Tracey Price.

S.A.F.E. stands for Shooting Awareness, Fun and Education. The program introduces 4-H'ers to the sport of shooting; promotes shooting safety; develops discipline, poise, and self-control, and re-enforces the concept of teamwork and good sportsmanship.  During meeting times members learn the fundamentals of shooting and work on the skills needed to do well in the shooting sport. Members also learn the importance of safety in the shooting sport.

Our team will offer shooting opportunities for the community in the near future with our range on Kaolin Road being open to the public for opportunities to shoot skeet, trap, and five stand.

Any youth, in 7th - 12th grade may join the Shotgun Team as long as they have completed the Georgia Hunter’s Safety Course. For more information about 4-H or to become a volunteer please contact the Washington County Extension Office at 552-2011.

Staff Listing
Connect With Us: