Historical information was compiled by the Walker County Senior History Project Team in the 1997-1998 4-H year. 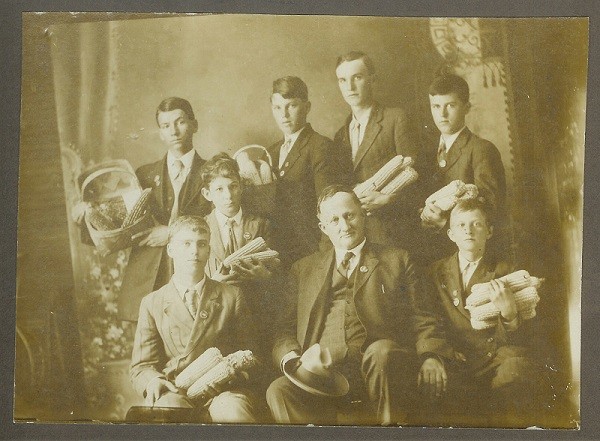 Walker County 4-H history began as early as 1911 with eight members of the Walker County Corn Club. Those members included Roy Bomar, Tom Crowder, Gordon Lee, Gordon Hasty, Mance Allison, Ben Leath, Duke Madaris, and Joe Bomar. As interest grew, members increased. The 4-H club was forming. In early 1931, the club had six girl members, with little interest among parents. In their first year, the girls set out to improve the room in which their meetings were held. A pie supper netted $75.00. The excitement grew and the money was deposited in the bank. For three years, with constant help and encouragement from their agent, Miss Mary Ida Fincher, they worked for it. All the money necessary was raised by 4-H club members. As excitement grew, membership did also. The clubhouse was dedicated in April, 1934, as the Mt. Carmel 4-H club with a membership of 39 boys and girls. Members were involved in different activities. The boys did a lot of livestock projects and girls did a lot of canning. With these projects came a lot of work at several fairs across the State. In 1933, Julius Thomas was in a livestock judging contest at the Southeastern Fair in Atlanta along with Denis Stogsdill of Rock Spring and Roy Moore of Cedar Grove. Julius Thomas was awarded a trip to the International Livestock Exposition in Chicago. In September of 1934, just about the biggest thing that happened in club work was the Southeastern Fair. The Walker County gang showed up with 18 beef calves. Frank Shattuck, Jr. had the champion steer which was sold to Kamper Grocery Company for 10 1/4 cents a pound.

In early July, 1935, County Agent C. W. Wheeler received a telegram from Miss Mary Fincher telling him that the Walker County 4-H club demonstration team had won first place honors at the District meet in Carrollton. The team members were Misses Lillian Thomas and Ruth Hibben. They presented an educational demonstration on "Nutrition". Miss Johnnie Lou Powell of Chattanooga Valley was the Walker representative in the fashion show at District and Miss Drennie Aiken of LaFayette in the bread making contest. The winners competed at the State contest in Athens.

In 1937, Miss Lillian Thomas was awarded a trip to Chicago to represent the State at the National Club Congress held November 27 to December 5. This award came as a prize from the Kerr Glass Corporation, sponsor of a National canning contest in which Miss Thomas was named State Champion by State Club Leader G. V. Cunningham. During the six years of prior 4-H club work, canning was one of her major projects. She canned 1,552 jars of food, mostly raised in her garden, which produced 6,157 pounds of vegetables. In Chicago she won a blue ribbon and a cash prize. Other members during this time were Betty Scheivelhud, Fred Henry, W.R. Huff, Jr. and Venice Houston. W. R. Huff, Jr. was very active in the dairy project in the late 40's. He spent a week at UGA doing his demonstration on butter fat in milk. Plus, he showed a Jersey heifer in many local fairs, state and even a national show. In 1948, he loaded his heifer on a train in Chattanooga then drove to Columbus, Ohio to meet her there so he could show her in the National Dairy Show. The foundation of the Walker County 4-H club was formed.

In 1954, Walker County sent its first group to Fontana Dam Resort for the TVA Resource Development Conference. Those going were Ray Kingsley, Karen Pope Hart, Barbara Allen Miles, Larry Weaver, and County Agent Clarence "Bo" Benton. Each year after that, one boy and one girl were selected to go.

In 1968, Walker County 4-H'er Tena Wright not only competed for State Dress Revue honors during 4-H Congress in Atlanta, but also provided a part of the events entertainment. Tena and the other Dress Revue girls had the opportunity to entertain shoppers at Rich's Tea Room in Atlanta. A 4-H fashion show was held featuring the district winners.

In 1970, 43 Cloverleaf club members attended the Project Achievement meeting in Cumming. They returned with nine winners. As 4-Her's continued to grow and "learn by doing", they received medals each year at annual County Achievement dinners, gave programs at County Home Economics meetings, attended summer camp at Rock Eagle and older 4-Her's were always willing to help the younger ones with their projects.
Thirty-five local Junior and Senior 4-Her's attended DPA at Rock Eagle in 1972. Alethea Young and Michael Cleghorn placed first in their projects. They were accompanied by County Extension Home Economist, Joyce C. Smith and Assistant County Agent, Ted Clark. Two Senior's also made a bid for District offices. Tommy Smith was a candidate for President and Rita Spears for girls Vice-President. Mike Cleghorn and Sonia Littlejohn attended the Resource Development Conference in 1975.

4-H in Walker County was now a great part of the things our youth were involved in. As those involved grew older, a new generation of 4-Her's began to develop. In 1976, Michael Cleghorn was one of the lucky 4-H members selected to go on an educational trip replacing the old 4-H Forestry Conference. Under the supervision of County Agents and extension staff, the 4-H members built their own 10-man rafts to specifications provided by the Cooperative Extension Service. They spent a week rafting the Ocmulgee from Warner Robins to Hawkinsville. This was an event that they will remember for the rest of their lives.

Judging events, competitions, and summer camping programs were strong. 1981 was the first year for the Chattanooga Valley Community Club. In 1982, they received the Community Pride Grant, made possible by the Chevron Company to be used for the club. Henry and Sandra Clark were volunteer leaders that worked hard to make the club a success.

In 1985, 13 4-Her's attended the State Square Dance Festival at Rock Eagle. Suzanne Smalley and her commercial heifer traveled to Athens, Georgia for the State 4-H Heifer show and four leaders from the Walker County 4-H Volunteer Leaders Association attended the Volunteer Leaders Retreat at Rock Eagle. Cloverleaf County Project Achievement was the largest ever and Walker County had a larger group than any other Northwest Georgia county at Cloverleaf District Project Achievement in Rome. 67 4-Her's attended and 10 placed first. Many parents and Junior leaders attended with County Agents Helen Gamble and Terry Chandler. Jane Green, Program Assistant, was known to most 4-Her's as "Mama" Green and to honor her, 4-Her's purchased seating in the auditorium at Rock Eagle with a plaque to be displayed in her honor. 1985 also saw the arrival of County Director, Mike Bunn.

In 1987, the first lamb show was held in Walker County. This event still continues today. Some of those outstanding lamb club members were Paul Bunn, Daniel Simmons, and Lani Burden, daughter of County Agent Ray Burden. Some of those still showing lambs are Patrick Bunn, Rachel Dawson, Jennifer Hughes, and Cole Shattuck.. J. C. Rogers won the State competition in 1987 in the Forestry project and in 1988 was chosen as a returnee delegate for the TVA Resource Development Conference. Other active members during this time included Jeff Davis and Ales Campbell.

The 90's is proving to be the best yet with not only County 4-H programs, but District and State participation going strong. 4-Her's stay busy with livestock projects, shooting sports teams, attending competitions and judging events. Local members are always eager to attend State meetings such as Jr. and Sr. Conference, Fall Forum, and State Council. Extension staff members work closely with advisory committee members and volunteers and local businesses like the Walker County Farm Bureau and North Georgia Farm Credit are always willing to help. For the first time, a county scholarship was offered to a graduating Senior for use in furthering their education.

1998 was a very exciting year in Walker County. Along with changes come new challenges. We have begun to work as clusters with three counties working together to "make the best better".

Kenny Wood, an outstanding 4-Her in the county for several years, not only served in 1996-97 as Northwest District President, but in 1997 was selected to serve on the 1997-98 State Board of Directors. Kenny was one of 29 candidates who ran for a position on the eight person board. Kenny was also one of seven 4-Her's from Georgia to represent the State at the National 4-H Conference in Washington D. C. He was also chosen as a camp counselor for the 1998 camping season. Kenny attended the Citizenship-Washington Focus trip in 1997 and his brother, Justin, attended in 1998.

The Walker County 4-H program thrives today because of the dedicated staff members. We continue to try to instill leadership abilities and teach public speaking skills, as well as, bring educational programs to the community hoping to play a small part in developing independent, upstanding citizens.