Fire ant populations are high in the fall and ants haven’t yet burrowed deep into the soil for winter. Among others, these are the reasons University of Georgia entomologists say that now is the perfect time to treat for them.

“Since the ants aren’t too deep in the ground, they are easier to kill with a mound-drench, granular or dust,” said UGA Cooperative Extension Entomologist Dan Suiter, who’s based on the UGA Griffin campus. “When using these products, it’s critical to treat when the queen and brood are close to the surface.”

Fire ants are usually most active in the spring and fall, when daytime temperatures are between 70 and 85 degrees Fahrenheit. They also spend a lot of time foraging for food in the fall. Actively foraging ants will pick up bait and carry it into the nest within the first hour or two.

Suiter recommends treating fire ants by first broadcasting a fire ant bait. He said if the product label is followed carefully, about 90 percent of the ants will be suppressed.

Apply the bait either across the home lawn or in a 4-foot circle around each fire ant mound. Use care not to disturb the mounds. Wear gloves and use only a new spreader dedicated to treating fire ants.

Never apply bait using a spreader that’s been used to spread fertilizer. Suiter warns that the fertilizer residue can alter the scent of the bait.

A week to 10 days after applying bait, kick or poke the fire ant mounds with a stick. Don’t forget to step away quickly. If there is any ant activity, apply a contact insecticide to the mounds.

“Get a long stick and run it down through the center of the mound,” he said. “It should push like a hot knife through butter. Pull the stick out quickly and pour in the premixed insecticide.”

Suiter says to be prepared to move away right after pouring the insecticide on the mound as the ants will scatter once the mound is disturbed. A premixed gallon or two of insecticide should fill the mound from the bottom up.

Baits do not stop new fire ant colonies from moving in from surrounding land or keep newly mated queens from becoming established. And, unfortunately, fire ant populations can fully recover within 12 to 18 months of the last bait treatment, Suiter said. Low-lying, moist and flood-prone areas are more susceptible to reinfestation.

If you prefer to use dry treatments, UGA College of Agricultural and Environmental Sciences entomologist Wayne Gardner says that dusts or powders can also be sprinkled on the surface of fire ant mounds.

“One really excellent one is Orthene (acephate) which is actually packaged and sold for fire ant control,” said Gardner who has studied how to control urban insect pests for more than 30 years at UGA-Griffin. “For those colonies that might survive the bait treatment, a second treatment of the mound with this material is an excellent idea.”

Dry treatments work like this. The worker ants find the powder, carry it into the mound and expose their nest mates and food supply, Gardner said. This method is called the “Texas Two-Step Method,” as it was developed at Texas A&M University.

Both Suiter and Gardner ask homeowners to be especially careful and never apply a pesticide near any body of water — streams, rivers, ponds, or lakes — as over-the-counter insecticides are deadly to fish and other aquatic life.

Fire ants were first reported in Georgia in the 1950s. Their mating flights have taken them as far east as North Carolina and as far west as Texas. The ants have also spread through nursery plant material to states like Arizona and California. 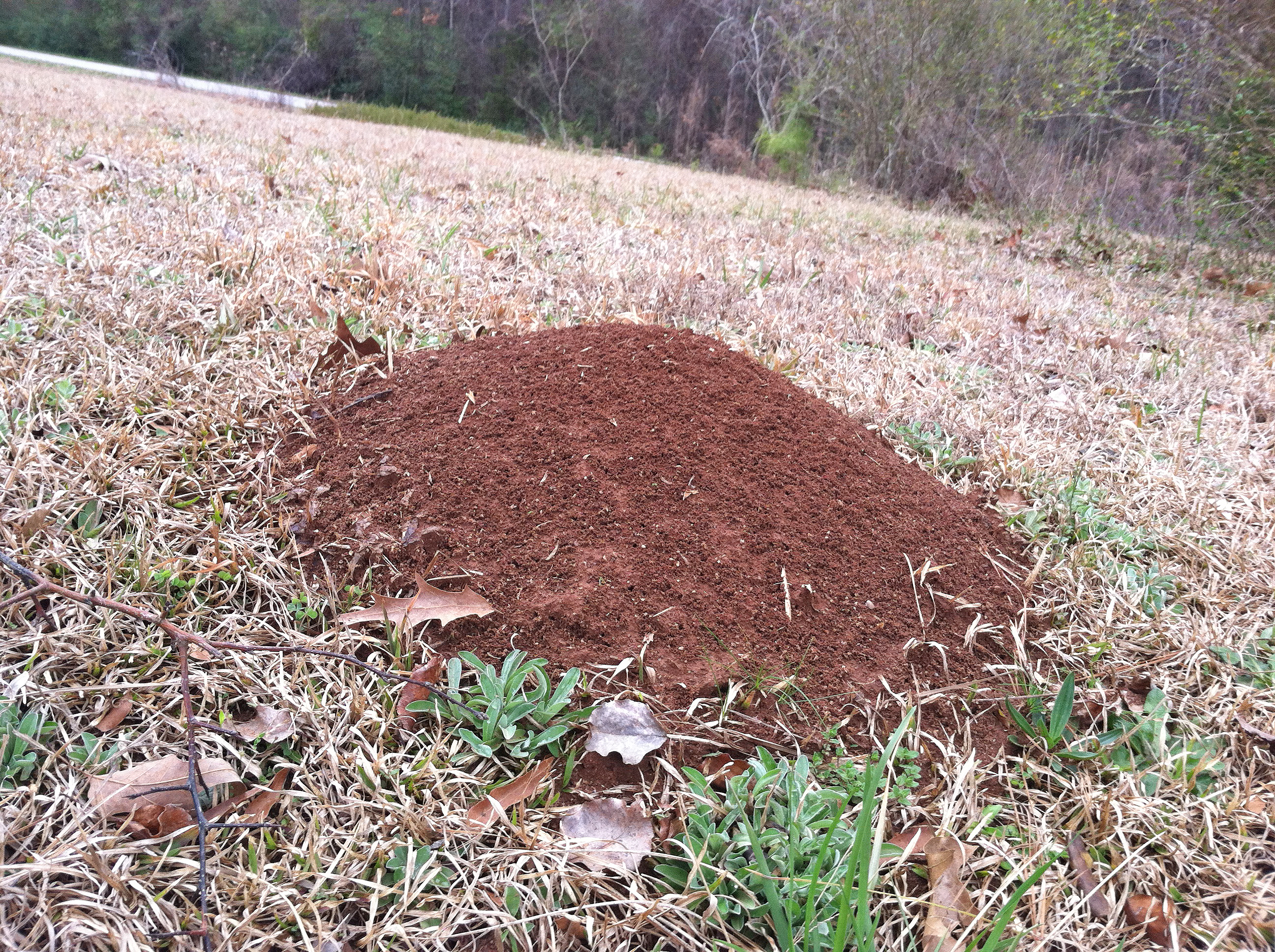