New research funded by the Southern Sustainable Agriculture Research and Education program and conducted at the University of Georgia shows that imidacloprid residue harms wild bees.

In a first-of-its-kind study, Christine Fortuin, now a postdoctorate researcher at UGA, developed a more accurate understanding of the lethal and sublethal effects of neonicotinoid exposure on blue orchard mason bees by studying multiple pathways of imidacloprid exposure.

“Imidacloprid is a neonicotinoid, which is a group of pesticides that are highly toxic to bees. It has several common uses but my research was focused on the soil-drench application method. This is when it is applied directly to the soil and soaked up through the roots of the tree to prevent beetles and other pests,” explained Fortuin.

She worked with Kamal Gandhi, a UGA professor of forest entomology, to conduct the research through Southern SARE’s Graduate Student Grant program.

Blue orchard mason bees are one of the few bees native to North America that can be a managed pollinator for orchard crops like apples, cherries and blueberries. Mason bees are members of the Osmia bee family and are considered a wild and solitary species. They have no queens or worker bees and while this dark, metallic blue pollinator may be similar in size to a honey bee, both its lifecycle and interactions with the environment are very different.

Because mason bees carry loose, dry pollen rather than forming it into a ball like honey bees, they have a much higher pollination rate. They also collect pollen from a variety of sources, where honey bees tend to focus on one area until it is depleted.  According to Fortuin, these tendencies allow one female mason bee to pollinate as much as 120 honey bees in her lifetime.

Mason bees get their name because they do not build a wax-comb hive but instead use mud to build their nests within naturally-existing holes. It cannot drill its own holes like a carpenter bee, but the blue orchard mason bee is perfectly comfortable using holes created by other insects or any other small opening it can find, usually hollow reeds, straw or even small paper tubes. Their adaptability in nesting location allows farmers to create habitats on their farms.

“After a female bee selects a nesting site, the female collects a pollen provision big enough for one egg then uses mud to seal off an egg with the pollen, creating individual partitions or cells for each egg within the nest. The eggs hatch and mature within the cells of the nest and eventually spin a cocoon where it pupates and turns into an adult which emerges in the spring,” said Fortuin.

According to the U.S. Department of Agriculture Forestry Service, these bees have a strong preference for fruit trees and are known for their efficiency when pollinating along with a willingness to pollinate in colder conditions than honey bees.

Despite their importance in orchards, little is known about the impact that soil-drench applications of neonicotinoid insecticides have on blue orchard mason bees.

As reported by the National Pesticide Information Center, neonicotinoid insecticides are made to mimic nicotine. These compounds disrupt and stop the central nervous system from functioning properly. As a water-soluble compound, it can be applied directly to the soil, onto seed or sprayed onto plants.

In the past, says Fortuin, risk assessment studies on the interactions between wild bees and this class of pesticide have focused on direct contact from pollen or foliar applications of the pesticide. Although wild bees regularly interact with the soil, little research has been conducted on the risks of exposure through soil-based contact.

The two-year grant project contained three major objectives. First, experiments assessed the impact of imidacloprid-treated soil on adult female mason bees and their nests. Second, they studied the developmental differences in offspring raised within nests built from treated soil and in the third research objective, experiments were conducted to determine if nesting mason bees showed a preference for soils with lower residual concentrations of imidacloprid.

To study the first objective, groups of female bees were exposed to soil containing varying levels of imidacloprid residue and monitored to determine if any differences could be detected in their nesting patterns.

“Residue levels in a field can vary widely depending on the type of soil, amount of organic matter, and the time since the pesticide was applied. Limited studies have shown that up to 1,000 parts per billion (ppb) can persist in the soil for several months. We chose to test a good range of residue levels to get a better understanding of the possible exposure levels,” said Fortuin.

After exposure to treated soil for one hour, bees from each group were released into flight cages at the Durham Horticulture Research Farm in Watkinsville, Georgia. The flight cages contained flowering rabbiteye blueberry shrubs, untreated male bees and custom-built habitats called nesting blocks.

Over a 14-day period, the bees were monitored daily for signs of nesting activity.

After the 14-day nesting period was complete, the blocks were removed for examination. Several factors helped assess the lethal and non-lethal impact of exposure on the female bees and their offspring. These factors included the total number of individual cells in each nest, the number of pre-pupal cocoons in each nest, the weight of pre-pupal cocoons, and the gender ratio of the offspring.

For the second research objective, a 3D printer created the specialized equipment called "well plates" that were needed to study the effect of imidacloprid on larval development. Each well on the plate was filled with 0.25 grams of damp soil following the same four exposure levels as earlier experiments. Six well plates were used, each containing six replications. In total, this created 36 replications for each exposure level. Once the embryos were grafted, they were incubated at 27 degrees Celsius (87 degrees Fahrenheit).

Signs of life like movement, eating, pollen moving through guts, or the movement of hemolymph under skin were checked daily.  Common signs of death including a change in color, darkening, a dull appearance or no response to stimulus were also monitored. Completed cocoons were removed after three weeks and weighed in the pre-pupal stage.

In the first experiment, female bees were divided into groups and placed in a chamber that contained two choices of soil. One chamber contained soil with little to no neonicotinoid residue and the other had soil containing various amount of imidacloprid. Six variations existed where the pesticide level ranged from 0 to 1,000 ppb.

For the second experiment, male and female bees were allowed to mate and feed on a sugar, water and pollen mixture for five days after emergence from their cocoons. These bees were given the choice of two soils, one that contained imidacloprid and one that did not. Paper tubes were provided as a nesting site. After two weeks, the remaining soil was removed from the test site, dried and weighted to determine if one was preferentially used by the bees.

This study represents the first attempt to explore soil-based exposure in wild solitary bees. The majority of wild bees either nest in the soil, or use it as a material to build their nests. As wild bees become more popular in managed pollinator systems, the potential for accidental exposure becomes larger.

Experimental results showed both lethal and non-lethal effects caused by imidacloprid residue in the soil which could have significant short-term and long-term impacts on bee populations.

While observing sub-lethal effects, the researchers noted that the weight of pre-pupal cocoons did not vary among exposure levels. However, the offspring of the bees was skewed towards male bees. In the 50-ppb treatment group, 50% fewer female bees were counted than the untreated control.

In the soil moisture experiments, no mortality was seen in the adult females at 20% soil moisture for any level of exposure. When exposed to soil at 40% moisture, a mortality rate above 50% was seen regardless of the imidacloprid levels in the soil. This indicates that pesticide exposure through moist soil has more potential for harm than dry soil.

In the second phase of the research, no significant differences in larval mortality were seen among any of the treatment groups. Fortuin also noted no differences in larval development time or pre-pupal weight. This suggests that soils containing residues of imidacloprid up to 780 ppb may not be lethal to offspring when used as a nest material.

In the third phase of research, no clear preference for treated vs. untreated soils was seen, even among bees which had the opportunity to select imidacloprid-treated soils with a level of 1,000 ppb. While more research is needed, this suggests that bees do not select against soils containing imidacloprid.

While the data suggests that larval bees may see limited effects from exposure, adult bees can be seriously impacted by soil-based exposure under the right conditions. These findings support the idea that the soil pathway is an important point of consideration in risk assessments for imidacloprid and other neonicotinoids. Currently, this pathway is not used in risk assessments by regulatory bodies which set the safety guidelines for pesticide use.

According to Fortuin, one simple solution to limit adult bee exposure is to cover the soil with mulch or bedding after applying the pesticide.

“It isn’t always practical on every farm but it does work. It limits the contact between bees and the soil. The bees have a limited forage range and usually stay within 100 meters of their nests but sometimes forage up to 500 meters away,” said Fortuin.

While more work is needed to determine the most effective risk management strategy, this research justifies the need to include the soil pathway as a consideration in risk assessments for imidacloprid and other neonicotinoids applied directly to soil if effective integrated pest management strategies are to be implemented.

Ian Bennett is a communications specialist for Southern SARE (Sustainable Agriculture Research and Education) on the University of Georgia Griffin campus.
Authors:
Ian Bennett
Experts/Sources:
U. S. Department of Agriculture 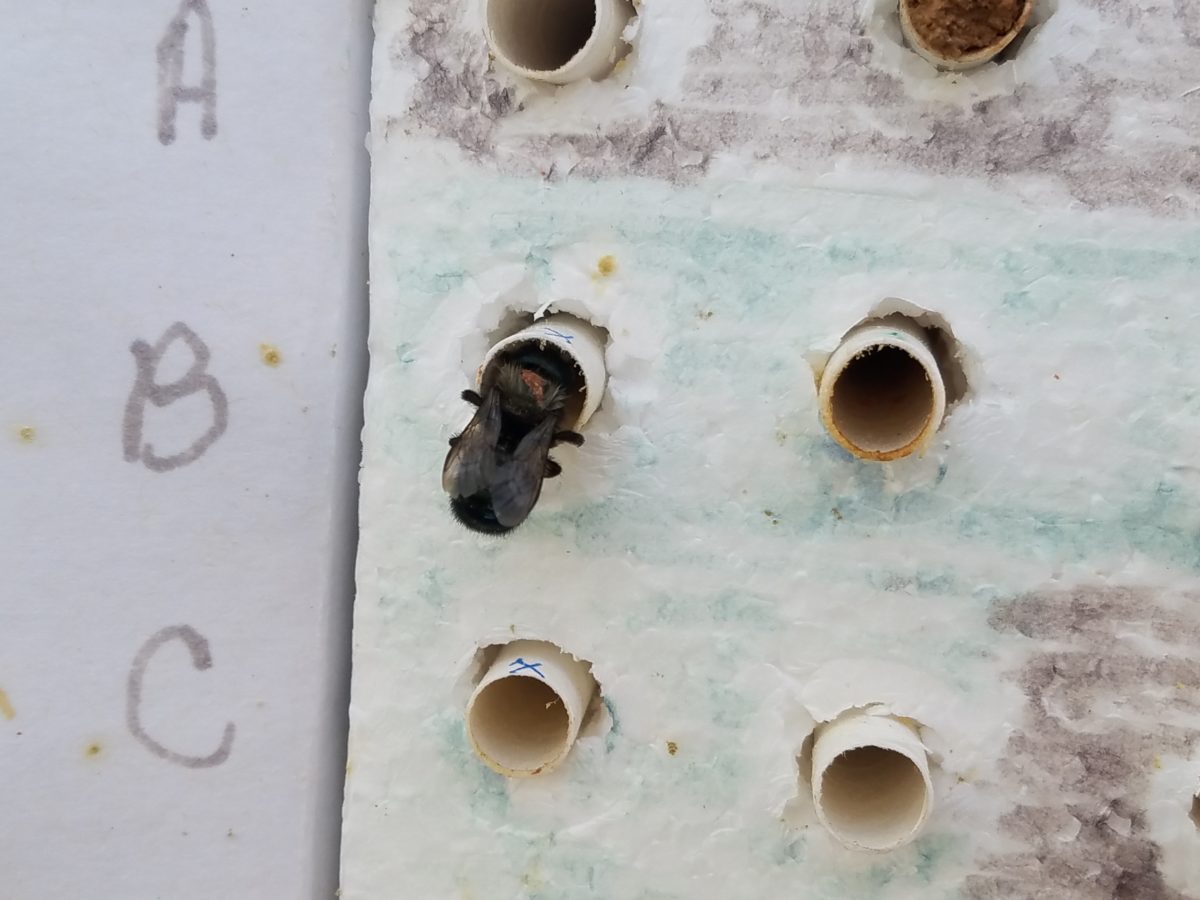 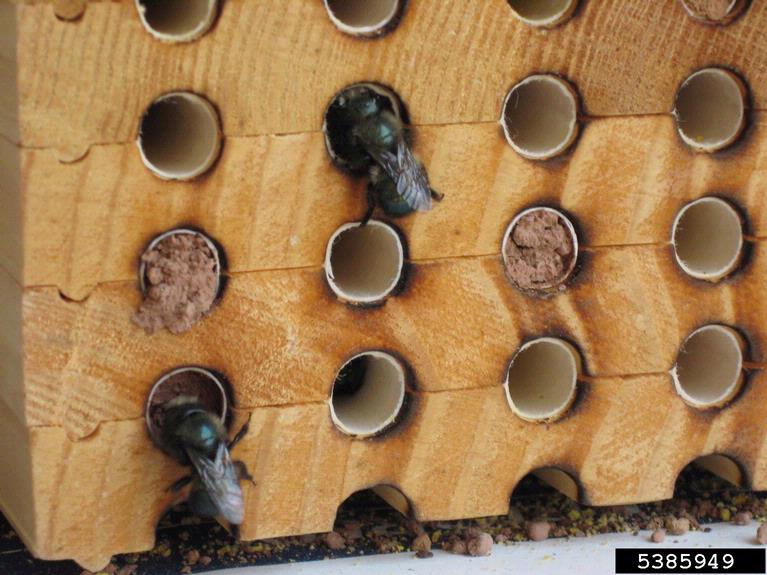