Pruning in the correct manner and at the proper time can help to maintain the size and shape of your woody shrubs, improving their appearance and appealing to the artist in every gardener.

Pruning also plays an important role in the health, productivity and well-being of woody plants. Three techniques that are important to understand if you are pruning your woody plants relate to pruning timing, tool sanitation and proper cutting technique.

I’m often asked when the best time is to prune hollies, crape myrtles, gardenias, azaleas, boxwoods or any other woody plant. Knowing when to prune flowering plants or evergreen plants can be confusing. The following are some basic rules that will help you determine when to prune your landscape plants.

There are some exceptions to these rules. Remove anything that is dead or diseased any time of the year. Another exception is to clean up the overall appearance of a spring bloomer that has not been pruned in a very long time. For example, if an azalea is 10 feet tall and scraggly and doesn’t flower well, then it can be pruned it in the late winter to clean it up. The plant won’t flower in the spring, but it will at least have a healthy start in the spring and will bloom the following year.

Some trees may bleed sap after pruning. Some examples include willows, birches, maples, beeches and dogwoods. Bleeding may be unsightly, but it typically is not harmful. However, if you don’t want the tree to bleed, prune in late spring or early summer when there are leaves on the trees. Actively growing leaves tend to reduce the amount of bleeding from pruning cuts and allow the cuts to heal more quickly.

Always use clean pruning shears and be sure to sanitize the shears after each use. This is easily accomplished by dipping them in or wiping them down with 70% isopropyl alcohol. Some people use a 10% bleach solution for this purpose, but bleach tends to have a corrosive effect on tools over time.

There are two main types of cuts that you can make while pruning. One is called a “heading cut,” in which the tips of branches are removed. This type of pruning is used to create dense regrowth near the cut, as would be expected in a hedge. The other type of cut that is often used is a “thinning cut,” in which an entire branch is removed at its base on the main stem or along a larger branch. Thinning allows more light to enter the shrub and is the preferred method if the pruning goal is to maintain a natural form.

When making cuts, look for the raised ridge of bark around the shoot that you are pruning, and make your cut so that that ridge is left intact. Tissue in this ridge of bark will help promote the cut to seal so, if you damage it, you may be inviting problems. It is also important to cut close enough to this ridge not to leave a stub, which also can slow the sealing process.

For more information on the correct way to prune, see the University of Georgia Cooperative Extension Bulletin 949, "Basic Principles of Pruning Woody Plants." 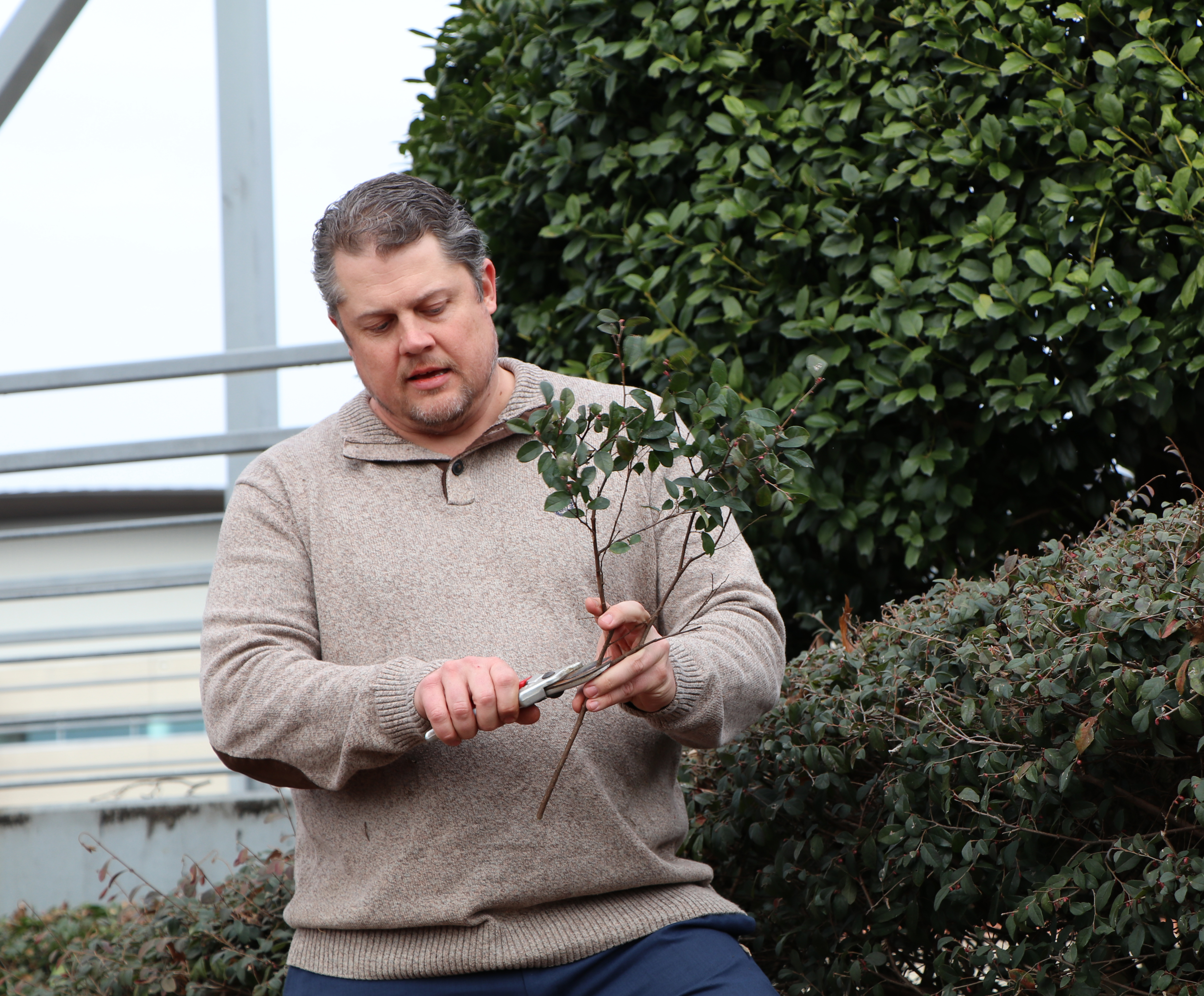