Blueberries are one of the most popular backyard fruits for Georgia because they are relatively low maintenance compared to other fruit species. However, there is one particular disease issue known as “mummy berry” that can be problematic for blueberry growers.

The disease is easily recognized when the fruit begins to ripen, as infected berries become dry, shrivel and drop prematurely. These infected berries are a pinkish color rather than the normal blue. This is caused by a fungus that can survive over the winter inside the fruit mummies that lay on the ground. Spores within infected berries can remain viable for several years.

Mummy berry can cause crop yield losses as high as 25% to 50% are not unusual if left untreated. Blueberry varieties differ in their susceptibility to the disease. Unfortunately, some of the most popular varieties for Georgia are known to be highly susceptible.

This year has been a terrible year for mummy berry disease due to the unusually cool, wet spring weather. Late freezes also predisposed leaves and flower buds to infection.

Mummy berry actually infects blueberry plants in two stages. The first stage occurs when spores (ascospores) are released from the fruit mummies on the ground. Wind spreads the spores to nearby plants, infecting newly emerging shoots and leaves. Newly infected leaves, buds, stems and flower clusters suddenly wilt, turn brown and eventually become covered in a powdery mass of spores. Secondary spores (conidia) from these blighted shoots are then carried to open flowers along with pollen. In fact, bees and other pollinators inadvertently spread the spores during pollination. During the second stage, the spores infect developing berries by growing into and colonizing the ovaries of the fruit.

Unfortunately, by the time most people notice the problem — normally close to harvest — it’s too late to do anything to salvage your blueberries for the current season. This is true of most plant disease issues. Once you’ve seen this disease in your blueberry planting, you can anticipate it will return the following year. The good news is that there are effective fungicide options that can be sprayed to prevent this disease early in the growing season. A few properly timed fungicide applications can effectively control this disease.

Sanitation is an important tactic for managing mummy berry disease with backyard blueberry growers, since fungicide options for home gardeners are limited. Burying or mulching the mummies during the winter can help prevent future infections. Rake or use a leaf blower to move mummies into row centers and bury 2” deep by disking the soil between rows or adding 2” of mulch. A bagging mower could be used to collect and remove the mummies. Shallow cultivation between rows before bud break can also kill any exposed fungal fruiting bodies. It is difficult to ensure that all mummies will be buried or removed, so chemical control is also necessary.

Fungicides should be applied soon after bud break when green tip occurs on leaf buds or less than 5% open bloom occurs on the flowers, whichever comes first. Continue sprays until all blooms have fallen. Once the flowers have been pollinated, no further infection can take place.

One control option that provides fair control is a product containing the natural bacterium Bacillus subtilis, sold under the brand name Serenade. This has been shown to reduce mummy berry infection if applied at the shortest labeled intervals during bloom.

Another good fungicide option is Captan 50WP applied every 7 to 10 days through bloom. Be sure to get a standalone fungicide that is not combined with any insecticides. Insecticides should never be applied during bloom as they will harm bees that are necessary for pollination. 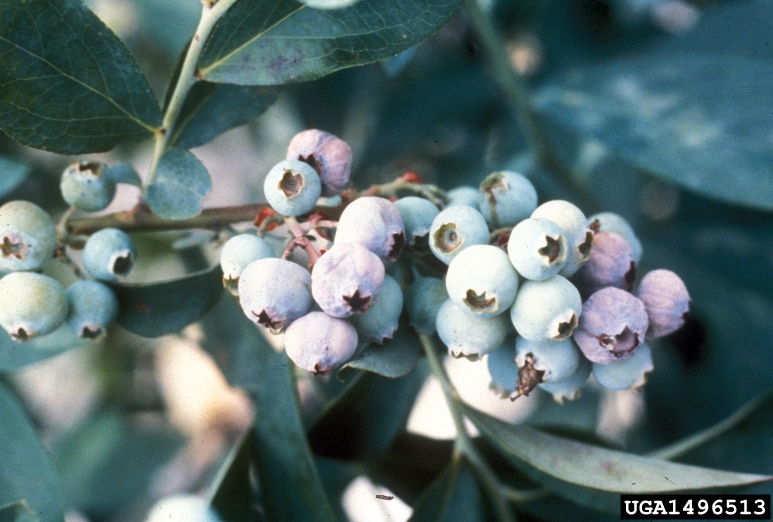