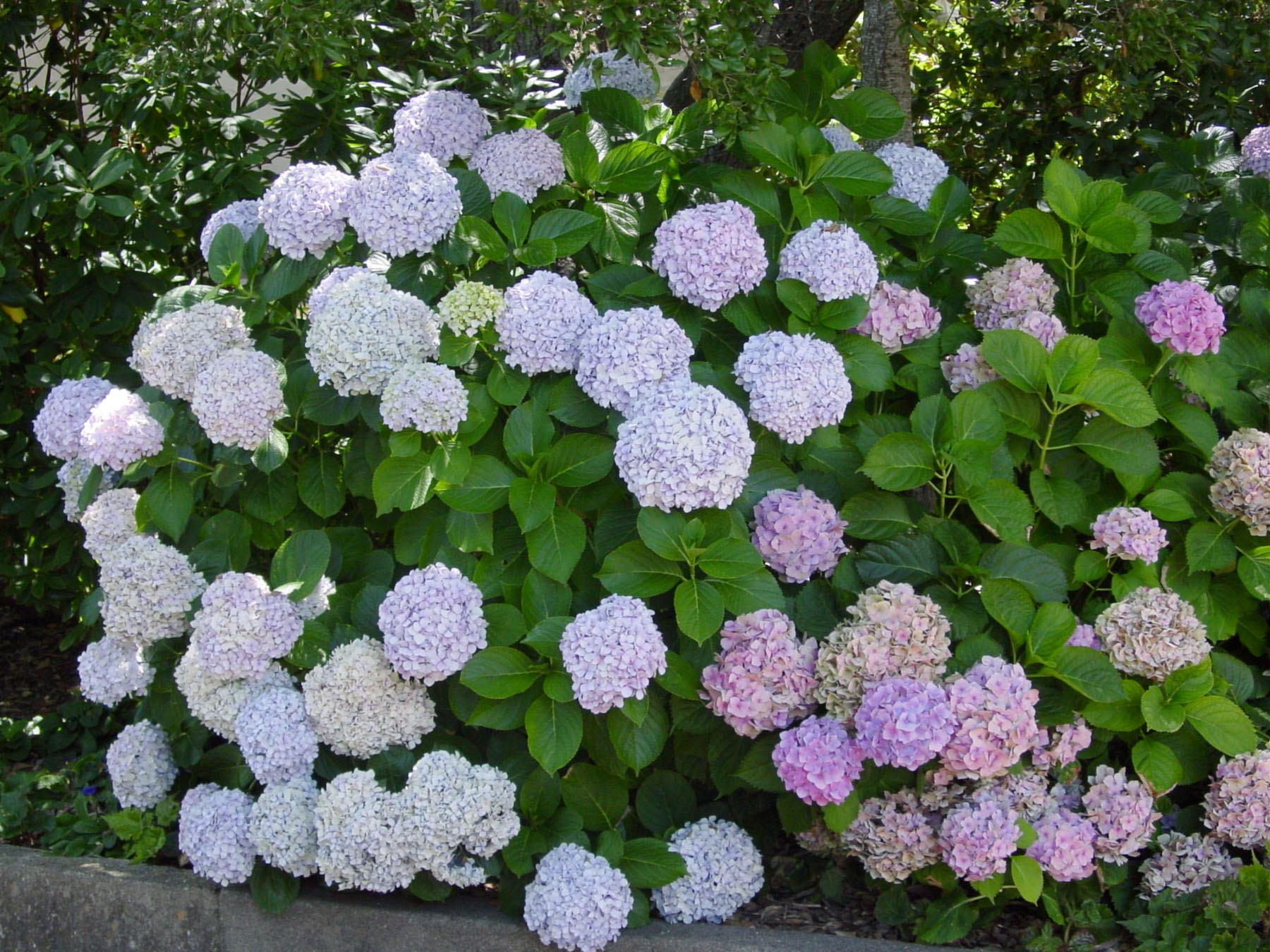 Bigleaf hydrangea, Hydrangea macrophylla, also called French, Japanese or snowball hydrangea, is both a florist plant and landscape plant in Georgia. Often purchased from florists as a gift plant, bigleaf hydrangea can be transplanted to the landscape for repeat blooms each year. Homeowners can change the flower color from pink to blue or from blue to pink by adjusting the soil pH.

There are more than 500 known cultivars of bigleaf hydrangeas in the nursery trade. They are divided into two main groups: the hortensias with large snowball-like flower clusters, and the lacecapes, which generally have somewhat flat-top flowers, with fertile, non-showy flowers in the center and more showy sterile flowers on the outside. 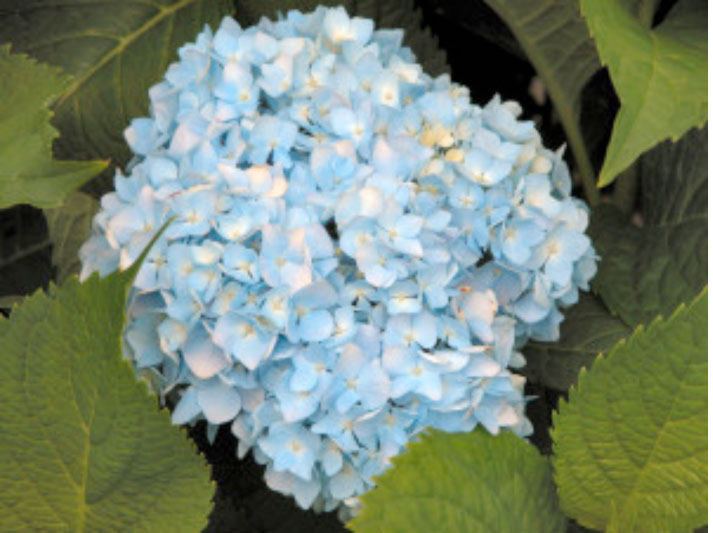 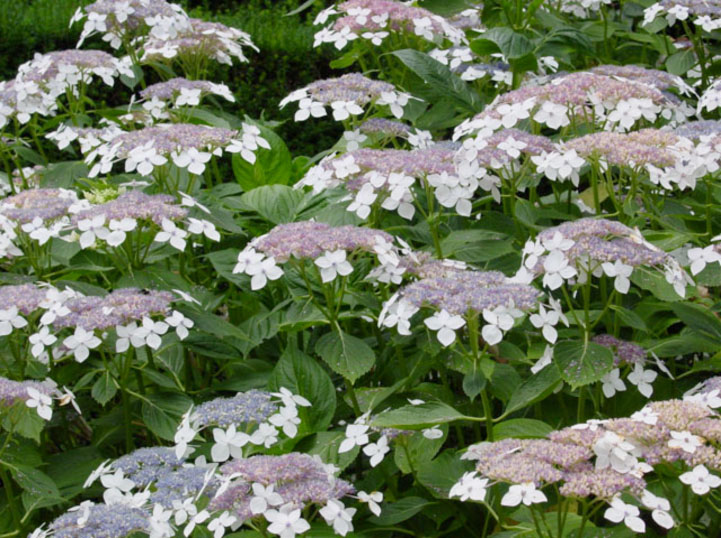 Bigleaf hydrangea prefers morning sun, afternoon shade and moist, well-drained soil. Avoid planting it on hot, dry, exposed sites. Cold damage to the buds may occur in winter and late spring, so be prepared to provide some winter protection by covering the plant with an old sheet, blanket or cardboard container when temperatures drop below freezing. A cylinder of chicken wire placed around the plant and filled with leaves also provides excellent cold protection.

Bigleaf hydrangea can easily be grown in containers and is an excellent patio plant. Another advantage of growing the plant in a container is that it can be moved indoors on a cold night.

If possible, prepare the soil in a wide area. Apply 50 pounds of a composted organic matter per 10 square feet and incorporate it thoroughly into the top 8 to 12 inches of soil with a tiller or shovel. Organic matter holds nutrients and water in the soil and helps prevent stress from wet/dry fluctuations in soil moisture.

Don't fertilize until the plant is established (4 to 8 weeks after transplanting). The majority of Georgia soils are acidic, so initial flower color will likely be blue.

Make certain the top of the root ball is level with the soil surface, and water thoroughly immediately after transplanting. Apply 3 to 5 inches of an organic mulch, like pinestraw, pine bark or fall leaves, to the soil surface to conserve moisture and control weeds.

Bigleaf hydrangea responds to several light applications of fertilizer during the growing season. A general-purpose fertilizer, such as 8-8-8 or 10-10-10 applied at a rate of 1 pound (2 cups) per 100 square feet in March, May and July is suggested. It is not necessary to remove the mulch when fertilizing, but do water soon after application to help dissolve the fertilizer and send it into the soil.

Bigleaf hydrangea is a water-demanding plant best suited for the moderate water-use landscape zones. Water whenever the plant begins to wilt in the absence of rainfall. It is particularly important to avoid plant stress in the spring when the flowers are forming.

Research has determined that the actual mechanism of color variation is due to the presence or absence of aluminum compounds in the flowers. If aluminum is present within the plant, the color is blue. If it is present in small quantities, the color is "in between," and if it is absent, the flowers are pink.

Failure to flower is sometimes a problem with bigleaf hydrangea. This can be caused by winter injury to the flower buds, growing the plant in too much shade, applying excess nitrogen fertilizer, or pruning at the wrong time of year. Bigleaf hydrangea forms its flower buds in late summer for the following year, so pruning in late summer, fall and winter will remove potential flowers.

Prune bigleaf hydrangea when the flowers begin to fade. Prune out flower heads and head back other shoots, as necessary, to encourage branching and fullness. Flower buds will begin forming in late summer for the following season, so avoid pruning after August 1.

Sometimes it is necessary to prune plants after a harsh winter to remove damaged foliage. Although this will encourage vegetative growth at the expense of flowers, it is better for the health of the plant and its aesthetic appearance to remove winter-damaged foliage.

Bigleaf hydrangea can be propagated from softwood cuttings taken in early summer. Select terminal cuttings from non-flowering shoots. Each cutting should be 3 to 5 inches in length and have at least 3 leaves. Make the cut at a node (where leaves are attached) and at a slight angle, then dip the cut end in a rooting hormone and place it in a moist growing media. Propagators often remove the top half of each leaf to reduce dehydration and wilting. Keep the cuttings moist and in a shaded area while they are rooting.

Bigleaf hydrangea in the landscape can also be propagated by layering. This is done by digging a trench near the plant and bending a section of limb down into the trench. Use a knife to remove a small ring of outer bark about 1 inch wide all the way around the limb where it contacts the soil. Then, cover the limb with soil, leaving 6 to 12 inches of the tip growth uncovered. If layering is done during the summer, the new plant should be ready for transplanting the following winter.

Old, established hydrangeas may also be divided in the early spring by using a shovel to divide the clump. Several plants can be obtained from a well-established clump.

There are a number of excellent publications available on hydrangeas, both online and from publishers. A former University of Georgia professor, Dr. Michael Dirr, has written a book titled Hydrangeas for American Gardens. It is widely available in bookstores and online. The U.S. National Arboretum also has an excellent online publication on selecting and growing hydrangeas. See www.usna.usda.gov/Gardens/faqs/hydrangeafaq2.html