Plant growth retardants (PGRs) are commonly used in greenhouse production to obtain full and compact plants that are visually desirable to the consumer, as well as easier and less expensive to ship.

The growth response to any PGR is affected by many factors including species, method of application and rate. New chemicals must be tested over a range of species, and newly introduced species and cultivars must be tested with a variety of chemicals. Different rates and application methods must also be tested because these factors greatly influence the efficacy of PGRs.

A recent study at the University of Georgia examined the effects of A-Rest (ancymidol) and Topflor (flurpri-midol) on several foliage plants. A-Rest is a commonly used growth retardant that has been proven effective on a wide range of species. Topflor is a triazole that was recently labeled for commercial use on greenhouse crops. The species tested were Colocasia ‘Excalibur,’ Alternanthera ‘Red Marble,’ Geogenanthus ‘Inca,’ Hemigraphis alternata, and Iresine ‘Curly’ (Figure 1). 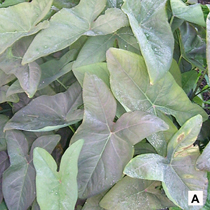 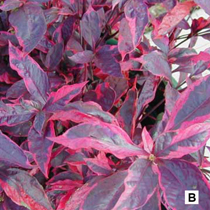 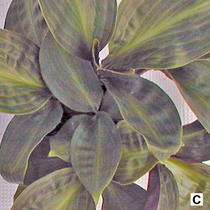 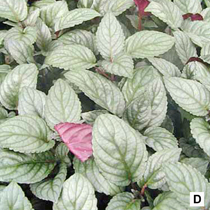 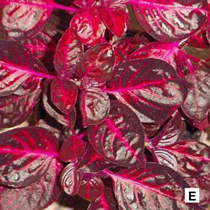 ‘Excalibur’ is a small colocasia reaching 24 to 30 inches in height, with beautiful bronzed-pink leaves borne on thin gray-spotted petioles. It is a shade plant perfect for mixed containers.

Alternanthera ‘Red Marble’ boasts pink and purple foliage and shorter stature, making it appropriate for use in both containers and the landscape.

Hemigraphis foliage is rounded with prominent veins and a slight shine to the silvery-purple color.

Iresine ‘Curly’ has a rounded medium green leaf with yellow veins and a notched tip; its stem and petioles are red. Iresines exhibit apical dominance and internode elongation, and growers would need to be able to control its growth before the marketing stage.

Tissue culture liners of all species were planted in 5-inch pots containing Fafard commercial soilless mix with peat moss and perlite. Plants were grown in a greenhouse covered with double-polyethylene and 50 percent shade cloth. Temperature settings were 21 degrees C day and 18 degrees C night. Plants were sub-irrigated with 150 mg/L N (Peters Excel Cal-Mag 15-5-15) at each irrigation.

Each chemical was applied as a drench (4 ounces of solution per pot) at five rates (0.125, 0.25, 0.5, 1.0 and 2.0 mg active ingredient per pot); a control group was treated with water. Treatment was administered during week 6 of production. Total production time for all species but Alternanthera and Iresine was 16 weeks. The latter two species required 12 weeks in production. At planting, Alternanthera and Iresine liners were given a soft pinch.

Topflor-treated Colocasias were shorter with smaller leaves and deeper bronze-pink color than non-treated plants. This effect was evident in plants treated with 0.5 mg a.i. rate and higher (Figure 2). The two higher rates of Topflor were most effective at controlling Colocasia height. Similar results were obtained with A-Rest, with effects more noticeable at 1.0 and 2.0 mg a.i. rates. A-Rest at 0.5 mg a.i. rate resulted in 19 percent shorter plants, while the higher rates on average resulted in 37 percent shorter plants compared to non-treated plants. Both chemicals increased overall compactness, which was more pronounced with increasing rates. When comparing the chemicals at the two higher rates, Topflor-treated plants were fuller and had more leaves than comparable rates of A-Rest. Topflor at the 2.0 mg a.i. rate caused minor leaf curl, indicating some phytotoxicity. 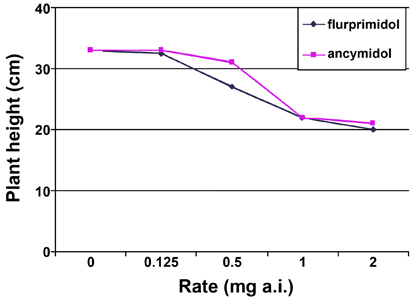 Figure 2. Growth of Colocasia 'Excalibur' treated with flurprimidol or ancymidol.

Both Topflor and A-Rest were somewhat effective in controlling growth of Alternanthera but at higher rates (Figure 3). 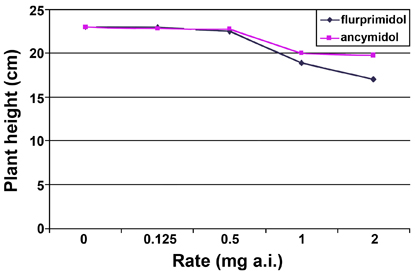 Geogenanthus was very responsive to both PGRs with respect to height control. At the 0.5 mg a.i. rate and higher, PGR-treated plants were on average 24 percent shorter compared to non-treated plants. In Geogenanthus, the natural suckering effect on leaves lessened with increasing rates of Topflor. Leaf size and overall plant size were progressively smaller with increasing Topflor rates. Geogenanthus plants were smaller at all rates of A-Rest as compared to controls. This was especially pronounced at the higher rates. Unlike Topflor, A-Rest did not impact the “seersucker” effect on leaves. However, the pattern of seersuckering changed: treated plants, regardless of rate, had leaves that were suckered and bumpy at their base (closest to stem).

Neither PGR was reliably effective at controlling growth of Hemigraphis at the rates used. Topflor caused a noticeable deepening in the purple leaf color. At the higher rates, however, Topflor also distorted leaves formed after chemical application. A-Rest did not cause leaf dimpling or curl in Hemigraphis. Although a certain amount of this dimpling is normal for Hemigraphis, the degree of dimpling caused phytotoxicity. 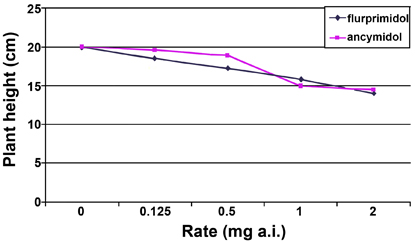 In summary, Topflor and A-Rest showed varying degrees of effectiveness in controlling growth of Colocasia ‘Excalibur,’ Alternanthera ‘Red Marble,’ Geogenanthus ‘Inca,’ Hemigraphis alternata and Iresine ‘Curly.’ The reduced height and smaller leaves resulted in compact, more marketable plants. In some of the species, foliage coloration was intensified, which increased their aesthetic appeal. However, in some species and at the higher rates tested, the plant growth retardants caused phytotoxicity, manifested in leaf distortion as excessive curling, or puckering, which necessitates caution when applying these chemicals.

The author wishes to thank Agri-Starts, Inc., for their generous donation of plant material.