Blister beetles sometimes infest forage crops such as alfalfa, where they may become incorporated in hay. Eating alfalfa hay contaminated with dead blister beetles can cause acute illness and death in livestock, especially horses. This publication discusses biology, cause of illness and management of blister beetles.

What is a blister beetle? 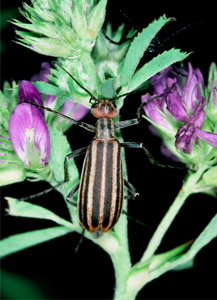 Blister beetles are native insects belonging to the family Meloidae. The adult beetles range in size from ½ to 1½ inches long. The beetles are elongated, relatively narrow, somewhat cylindrical, and have relatively soft bodies and wing covers. Blister beetles can usually be distinguished from other beetles because the “neck,” or thorax region behind the head, is narrower than the head when viewed from above. (See figures.)

Blister beetle adults feed on leaves of various plants including alfalfa, soybean and various wild flowers. Adults are attracted to flowering plants and can be found on goldenrod flowers and similar plants in bloom. Blister beetles have distinct egg, larva, pupa and adult stages. Larvae of the species contaminating hay will be found in the soil, where they feed on egg pods of grasshoppers. Large blister beetle numbers are sometimes associated with outbreaks of grasshoppers the previous year. In Georgia, blister beetles may occur throughout the season, but usually are most abundant later in the summer from late July through October. 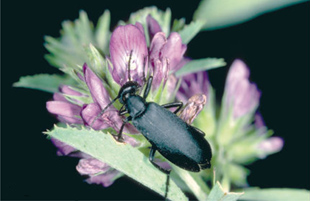 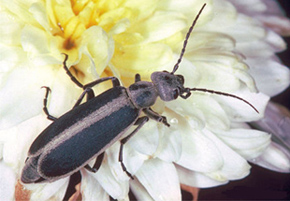 Why are blister beetles a threat to livestock?

Blister beetles contain a chemical toxin in their bodies called cantharidin. Cantharidin causes irritation that can blister skin and internal body surfaces. Horses are sensitive to this compound, but ruminate livestock such as cattle and sheep also can be affected. In horses, colic, diarrhea, blood in stool and urine, and the sloughing of intestinal linings have been associated with the ingestion of contaminated hay. Poisoned horses may pass small amounts of blood-tinged urine, place their muzzle in water without drinking, or suffer from elevated temperature, increased pulse rate, dehydration, depression and shock. Death or, in the case of pregnant mares, abortion can result within 24 hours of consumption of contaminated hay. If blister beetle poisoning is suspected, Contact a veterinarian immediately.

Cantharidin is a naturally occurring toxin produced by the male blister beetle and transferred to the female during mating. Consequently, males tend to contain a higher concentration of the compound than females although this is not always the case. Typical concentrations of cantharidin from studies conducted in Colorado and Kansas for four common species that occur in Georgia are listed in Table 1. It is clear from the average and range of values that cantharidin levels are highly variable among individuals of the same species, between different species, and among locations for the same species.

How many blister beetles does it take to kill a horse?

The toxicity of cantharidin to horses has not been definitely determined, but the estimated minimum lethal dose is 0.5 to 1 milligram per kilogram of body weight. The toxicity of cantharidin is comparable to that of cyanide and strychnine. Table 2 estimates the number of beetles needed to be ingested to provide a lethal dose to horses of different body weight, assuming a 1 mg/kg lethal dose. These values are estimates only.

Many factors such as a horse’s age, size, breed and general health can affect an individual animal’s susceptibility. Pregnant mares also are more susceptible to abortion at a lower dosage than the dose needed to cause mortality.

It is clear from Table 2, however, that it takes more than one or a few blister beetles to kill an adult horse. Reliable reports from Kansas indicate that between 25 and 300 or more beetles may cause horse mortality following a single feeding of contaminated hay. Nevertheless, relatively few blister beetles can cause colic and other symptoms in horses, which may indirectly lead to their death.

Have horses in Georgia been poisoned by eating hay contaminated with blister beetles?

The short answer is yes. Occasionally, the University of Georgia’s College of Veterinary Medicine has linked horse illness and mortality to ingestion of blister beetles. In most of these cases, the blister beetles have been associated with consumption of contaminated hay from western states. A few cases of poisoned horses from contaminated hay from Georgia have occurred over the past two decades, however.

Blister beetles are a much more severe problem in western states, where conditions are normally dry and large grasshopper populations occur annually. Considerable work has been done in these areas to limit the risk of blister beetle contamination of hay.

Grasshopper populations usually are low in Georgia, except during years of drought. Blister beetles also tend to be more abundant during periods of extended drought conditions.

How do blister beetles get into the hay?

It is not uncommon for blister beetles to be found in fields of alfalfa. It is also possible to find them in fields of clover, although the main threat is with alfalfa. The main species associated with livestock poisoning is the three-striped blister beetle because of its large size and tendency to congregate in large numbers in a very small area of a field. Aggregations of more than 60,000 beetles have been documented in western states, but aggregations in Georgia usually are much smaller. In addition to the three-striped blister beetle, the black and margined blister beetles also are common in alfalfa in Georgia.

When alfalfa is cut and harvested, blister beetles can be crushed and killed as hay is swathed. Because beetles tend to aggregate, many beetles can be deposited in just one or a few bales when hay is baled. If the beetles did not aggregate and were randomly distributed with a field, it is much less likely that a lethal number of beetles would occur in any one bale of hay.

Self-propelled or side-mounted mowers or swathers with conditioning bars can crush beetles in hay during the harvesting process. Wheel traffic over mowed hay also can crush and kill beetles in hay. Indeed, studies show that wheel traffic from a tractor with a side-mounted sicklebar mower can kill a similar number of blister beetles in hay as can a hay conditioner. Unfortunately, cantharidin is a very stable compound and can remain toxic in stored hay for more than a year. Furthermore, raking may dislodge dead beetles from hay before baling, but substantial amounts of cantharidin may remain on hay when body fluids of crushed beetles transfer to the forage.

How easily can blister beetles be seen in hay?

Blister beetle body parts can be very difficult to locate within contaminated hay. All flakes within all bales need to be inspected since most beetles may be in one part of one bale. Also, body fluids containing substantial amounts of cantharidin may remain on contaminated hay even if most of the dead beetles where dislodged during the harvest process. Nevertheless, detailed inspection of small numbers of hay bales for high-valued animals may be useful.

Can anything be done to minimize the risk of hay contamination?