Each year an elite group of Green Industry Professionals from throughout Georgia convene to select a slate of outstanding ornamental plants in five categories: annual flower, herbaceous perennial, vine, shrub and tree. Only one plant in each category can earn the Plant Selection Committee’s coveted Gold Medal Award for outstanding performance.

The nominees are judged on a strict test of criteria, including pest tolerance, ease of maintenance, survivability, seasonal interest and availability. The list is long and the selection process is tedious, sometimes causing heated debates prior to the final secret ballot. But the cream always rises to the top and, in the end, honors are always well deserved.

Like previous winners, the 2006 selections represent the best of the best in their categories, including a low-maintenance annual flower that provides an explosion of blooms from summer though fall, a herbaceous perennial that grows like a groundcover in the harshest situations, a native vine selection that repeat blooms throughout the summer, a flowering shrub with snowball-like blooms in May, and a tree that tolerates the toughest sites.

The following is a brief description of each of the 2006 winners. Look for them in your local garden center or nursery this spring.

Cupheas are dependable, low-maintenance flowers that not only tolerate the heat and humidity of the South, but also have an exceptionally long bloom period. They attract butterflies and hummingbirds like magnets and are versatile enough for container plantings or in-ground beds. Three species are commonly found in the nursery trade. All will provide award-winning qualities in the garden. 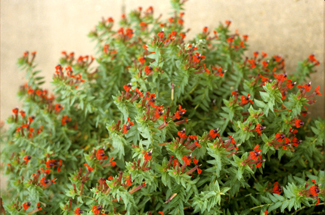 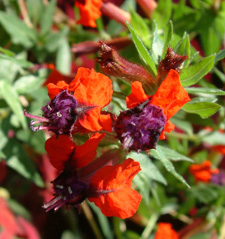 Firecracker Plant (Cuphea ignea) ignites in color like nonstop fireworks on Independence Day. Tubular, scarlet-red flowers edged in black emerge in abundance at the leaf axils along the stem. Growing about a foot tall, Firecracker Plant is a perfect companion plant for containers or window boxes or for planting in front of taller plants in a perennial border. A light trimming in midsummer will encourage basal branching and more compact, bushy plants — and more fireworks until frost. Firecracker plant does best in full sun and moist, well-drained soils.

Mickey Mouse Plant, Tiny Mice and Georgia Scarlet (Cuphea llavea) are three common names used to identify the second outstanding Cuphea species. Georgia Scarlet Cuphea was the original selection released from the breeding program of researchers at the University of Georgia’s Tifton campus. Later, the names Mickey Mouse Plant and Tiny Mice were given to the plant by the trade because the flowers resemble the face of a mouse, with two red petals tinged in purple. Children love this plant and marvel at the hundreds of tiny mouse faces produced on short spikes along the stems. They also enjoy watching the hummingbirds and butterflies that visit the plant in abundance to collect the sweet nectar from the flowers. This species grows up to 2 feet tall and branches freely to form a bushy, compact plant for containers or ground beds. Summer cuttings root readily for sharing with neighbors and friends.

Tall Cigar Plant (Cuphea micropetala) is a great background plant for perennial borders, reaching 3 to 5 feet in height. By mid to late summer, 2-inch-long tubular, cigar-shaped blooms emerge in the upper axils, and flowering continues until frost. Flowers are reddish at the base, yellow in the middle and green at the top, simulating an open flame. By fall, the plant literally looks as though it has caught fire. This species can survive temperatures as low as 20 to 25 degrees Fahrenheit if cut back, mulched and protected during mild winters, so it may be a perennial in the warmer parts of Georgia. 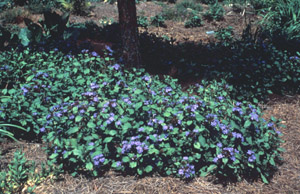 Just a glimpse of the bright, true-blue flowers of Perennial Plumbago and it will be love at first sight! It’s hard to find a more durable and attractive flowering groundcover. Growing just 6 to 10 inches tall and spreading 1 to 2 feet wide, it is a great choice for filling spaces between shrubs, creeping over rocks in a rock garden, adding a splash of blue to the perennial border or spilling over walls. Drought and deer tolerance and a long bloom period are other outstanding qualities of this award-winning plant. 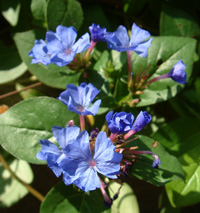 Perennial Plumbago, also called Leadwort, belongs to a group of deciduous perennials and shrubs from eastern Africa and Asia. It is a semi-woody, mat-forming perennial that spreads by rhizomes (shallow underground stems). The plant dies back to the ground each year and leafs out late in the spring, so plant it where it won’t get damaged by early spring cultivation. The late spring green-up makes it an excellent plant for inter-planting with spring-flowering bulbs; its leaves will be emerging just as the foliage of bulbs is dying back. The shiny green leaves are up to 2 inches long and turn bronze-red in the fall.

Medium-blue flowers, resembling those of woodland phlox, emerge in terminal clusters in late summer and continue to emerge until fall frost, providing an exceptionally long bloom period. Each flower is 0.5 inch to 0.75 inch in diameter and has five petals.

Perennial Plumbago prefers a sunny site, but it will tolerate some afternoon shade. Once established, it is quite drought-tolerant. Spring planting will assure establishment before summer bloom and will increase hardiness the following winter.

Fertilize Perennial Plumbago lightly in spring and again in early summer, if necessary, to encourage more rapid cover. Wait until new leaves emerge to prune out any dead wood from the previous season. Summer cuttings, spring division, root cuttings and seeds are all common methods used to propagate the plant. 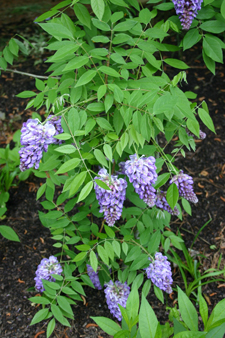 Plant a Japanese or Chinese wisteria in your landscape and then stand back! You will spend the rest of your life trying to control its growth. Plant an Amethyst Falls wisteria, an improved cultivar of our native American wisteria, however, and you will be pleasantly surprised at its less aggressive nature. Although the vine will climb 20 to 30 feet, it’s less vigorous, not as invasive and easier to manage than its Asian relatives.

While the Asian types of wisteria may take 10 years or more to begin flowering, Amethyst Falls Wisteria begins flowering at 1 year of age. Flowering occurs on new growth of the season and is about two weeks later than that of the Asian types (late April to early May in Athens, Georgia), so late-winter frosts seldom affect flowering. If lightly trimmed after flowering, new shoots will produce a second flush of blooms in the summer.

Considered by some to be a dwarf wisteria, Amethyst Falls has smaller leaves and flowers than the Asian types. Flowers are fragrant, lavender-blue and borne in 2- to 4-inch-long racemes that cascade from the foliage like a waterfall — hence the name “Amethyst Falls.”

Deer and drought tolerance are other outstanding attributes that earned Amethyst Falls Wisteria a Gold Medal award in 2006. It is a perfect choice for pergolas, trellises or fences. It also can be trained as a free-standing tree form by tying it to a sturdy stake, 5 to 6 feet tall, and pruning the top to encourage branching. Once a tree-like canopy forms and the trunk becomes sturdy enough to stand alone, the supporting stake can be removed. This process is somewhat labor-intensive, but the wisteria tree provides an unusual accent to the landscape.

Prune Amethyst Falls Wisteria in late winter, if necessary, to shape the plant and remove undesirable growth. Trim lightly again after the first flush of bloom to encourage branching and repeat blooms. A late-winter application of a complete fertilizer, such as 16-4-8, is recommended. 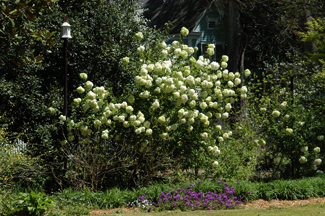 Snow seldom falls in Georgia, but it’s possible to have snowballs in April and May if you plant Chinese Snowball Viburnum. The showy white flower clusters, up to 8 inches across, look just like snowballs, only without the ice crystals. “When in full bloom, the plant is a veritable “white-out” of flowers,” says Ann Johnson, Atlanta landscape designer. 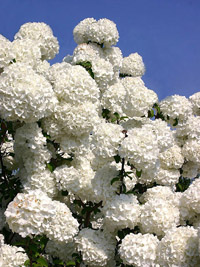 Chinese Snowball Viburnum (Viburnum macrocephalum ‘Sterile’) is a large, deciduous shrub 10 to 15 feet in height with an equal spread. It looks best when used as a background plant in the perennial border or woodland garden, where it disappears into the winter landscape, then pops to the foreground in spring to become a focal point of the landscape.

Flowers of Chinese Snowball Viburnum consist of numerous florets 1 to 1.5 inches in diameter, clustered together in a hemispherical, ball-like structure, botanically called a cyme. The flowers emerge green and then gradually fade to pure white. Eventually they become light brown, persisting on the plant for several weeks. Sometimes a second flush of bloom occurs in late summer. The flowers are commonly cut and used, both fresh and dried, in floral arrangements.

Chinese Snowball Viburnum prefers moist, well-drained soils and afternoon shade. It is not drought-tolerant, so irrigation during times of limited rainfall is essential to keep the plant healthy. Flowering occurs on old wood, so avoid pruning until after flowering. Then prune as necessary to thin out old branches, open up the shrub, reduce height or develop a better shape. Old plants can be rejuvenated by cutting them to the ground, but they may not resume flowering for 2 years after severe pruning.

Chinese Snowball Viburnum is sterile and doesn’t produce fruit or seed. It roots easily from summer cuttings, however. 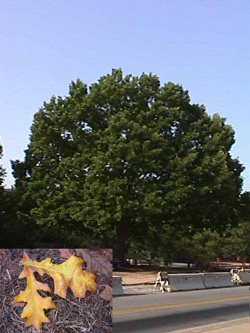 “Bulletproof” is a term used to describe plants that thrive with very little care in a variety of soils and growing conditions. Overcup Oak (Quercus lyrata) fits that definition perfectly. Also called swamp post oak, swamp white oak and water white oak, this native oak species is found in wet bottom-lands of the coastal plain from Delaware to Georgia and west to Texas. It also grows along the Mississippi River flood plain as far north as Illinois and Indiana. Despite its tolerance of wet sites, you don’t have to live in a swamp to enjoy Overcup Oak. It does equally well on dry, upland sites and adapts to a variety of soils and growing environments.

Overcup Oak typically grows 50 feet high and 50 feet wide under cultivation, but it has been known to reach 125 feet in the wild. It’s a tough shade tree for large landscapes, public parks, golf courses and office parks. While most oaks have a reputation for being slow growers, Overcup Oak grows fast, particularly when young. Its initial growth is somewhat pyramidal. Then it gradually becomes more rounded with age.

From a distance, Overcup Oak looks similar to its white oak cousin in many respects, including its rough-textured, gray-brown bark, deeply lobed leaves and yellow fall color. Its leaves are not as deeply lobed, however, and the bark is less scaly than white oak. The most distinguishing characteristic is the unique shape of the acorns. A warty cap almost completely covers the nut. The acorns drop to the ground in the fall and are a food source for wildlife, including squirrels, deer and turkeys.

“Overcup Oak is a tough, tolerant tree that is perfect for less-than-perfect sites,” says Lisa Lightfoot of Bold Springs Nursery. “It thrives in heavy, compacted clay soils and loves the heat and humidity of the Deep South.”

With a life span as long as 400 years, it provides a living legacy for future generations to enjoy.