Circular 889-3
View PDF picture_as_pdf
This publication is part of the Wildlife Management series.

In the past 50 years, the range of the nine-banded armadillo (Dasypus novemcinctus) in the south has been rapidly expanding, bringing armadillos increasingly into conflict with suburban landowners. When foraging, armadillos often uproot ornamental plants. Their rooting also destroys gardens, lawns and flower beds. Their burrowing can damage tree roots and building foundations. Most armadillo damage is caused by their feeding habits. Armadillos dig shallow holes, 1-3 inches deep and 3-5 inches long, as they search for soil invertebrates.

A recent survey of Georgia county extension agents by scientists at the University of Georgia found that 77.6 percent of all agents reported receiving complaints or requests for information on armadillos. Armadillo-related inquiries made up 10.1 percent of all inquiries for all agents across the state, surpassing even the white-tail deer (Odocoileus virginianus).

Armadillos are often assumed to destroy nests of ground-nesting birds. Armadillo diets have been studied in several states including Alabama, Louisiana, Texas, Georgia, Arkansas and Florida. According to these studies, vertebrate matter, especially bird eggs, made up a minor portion of their diet. The armadillo’s diet often consists of more than 90 percent insects, grubs and earthworms. Based on these studies, it seems that claims of armadillos being significant nest predators are unfounded.

Some authors warn, however, that armadillos merely break eggs open and lick out the contents. When this happens, little evidence remains in their stomachs, making detection of egg predation using stomach content analysis almost impossible. Miniature video-surveillance cameras monitoring quail nests at Tall Timbers Research Station in Florida have documented this behavior in wild armadillos. The study found that armadillos may be more significant quail predators than previously accepted. They were responsible for destroying up to 26 percent of all quail nests.

Armadillos are not protected under Georgia wildlife regulations (DNR website www.georgiawildlife.com). They may be hunted or trapped year round without limit. Removal by shooting can be an effective control method, but this may not be safe or desirable for suburban landowners. Many suburban landowners would rather have animals trapped and relocated. Other control methods are available, such as habitat modification and exclusion, but these methods are often impractical, expensive or ineffective. Our objective was to test several different lures or baits for live-trapping nine-banded armadillos. We used cage traps, hoping they could be a practical alternative to lethal removal for suburban landowners.

We trapped armadillos, using 10 x 12 x 32 inch Tomahawk wire cage traps, from April to July, 2004, at the Joseph W. Jones Ecological Research Center in Newton, Georgia. Traps were placed in areas with abundant armadillo sign. Since we were primarily interested in evaluating the attractants we avoided placing traps directly over burrows, where armadillos may be forced into traps. We tested the effectiveness of several baits and lures, including: 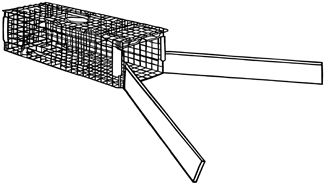 In our study, we had 1,332 trap nights. We captured only 10 armadillos or an average of one armadillo every 132 trap nights. This number is quite low. Of the 11 attractants we evaluated, most of them (nightcrawlers, chicken feed, whole eggs, bananas, marshmallows, sardines and vanilla wafers) had 0 captures. Table 1 shows the results of the four remaining attractants. Capture success was too low for any meaningful statistical comparisons of attractants. However, when all baited traps (63% of trap nights) were compared with the unbaited traps (37% of trap nights), there was no significant difference in capture success (Figure 2). Only four armadillos were captured in traps with baits or lures. Six armadillo were captured in unbaited traps. Of these six, four were caught in unbaited traps with wings. 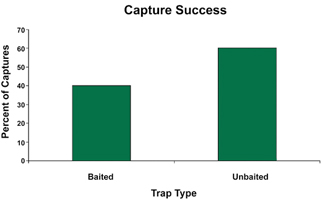 Given that capture success was quite low, it is unlikely that trapping is an effective method of quickly reducing local armadillo populations. Until an effective attractant can be found, lethal removal by shooting remains the most effective solution. If live-trapping and relocation are chosen as control measures, however, the use of any of the attractants tested is unnecessary. Armadillos in this study were just as likely to enter a baited trap as an unbaited trap. It is likely that the armadillos we did capture randomly walked into the traps and were not necessarily attracted.

This suggests that if armadillos are to be captured, trap placement is much more important that attractant selection. Homeowners and others attempting to live trap armadillos should carefully select a trapping location. It is likely that a trap (even one without bait) with wings placed near an active burrow will be the most effective method for capturing individual nuisance animals. Homeowners and others can place traps near natural barriers or fences such as the walls of patios, edges of buildings or landscaping features; or near natural fences such as fallen trees. The use of baits and attractants does not appear to increase trap success.

This study was supported by a Graduate Fellowship from the Berryman Institute – East at Mississippi State University and the J. W. Jones Ecological Research Center.