Controlling Poison Ivy in the Landscape

Circular 867-10
View PDF picture_as_pdf
This publication is part of the Weed Wizard series.

Poison ivy (Rhus radicans) is a common poisonous plant in Georgia. Its preferred habitat is moist, deciduous forests and wooded areas; however, it is also found in pastures, fence rows, ornamental plantings and various types of noncropland areas. Poison oak (Rhus toxicodendron), a related species that may actually be an ecotype of poison ivy, is also found in similar habitats. Chemicals (urushiols and others) found in special cannels of poison ivy and oak cause contact dermatitis (redness, rash, blisters, itching) on thousands of people each year. The American Medical Association estimates that in the United States poison ivy and Pacific poison oak (Rhus diversiloba) cause more cases of contact dermatitis than all other plants and household and industrial chemicals combined.

Every person who works outdoors with plants or participates in hiking, camping or other outdoor activities should be able to identify poison ivy. Failure to do so can lead to severe allergic reactions. 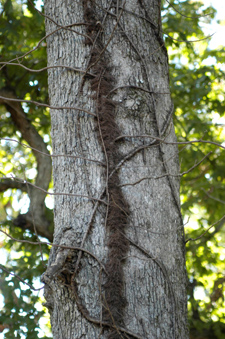 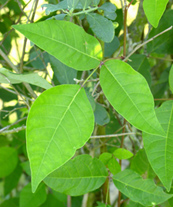 Poison ivy is a woody perennial that belongs to the Cashew (Anacardiaceae) family. It may grow as a small shrub or as a high climbing vine with aerial rootlets on trees, fence rows and buildings (Figure 1).

In contrast, poison oak usually grows as a small shrub. Poison ivy reproduces by creeping roots and seed. Leafy shoots can arise from the creeping roots several yards away from the parent plant.

Poison ivy leaves are alternately arranged on the stem. Each compound leaf consists of three bright green, shiny leaflets (Figure 2). Leaflets are elliptic to egg-shaped and have either smooth, toothed or lobed margins. The upper leaf surface is smooth, or lacks hairs, while hairs are commonly found on the veins of the underside of the leaf.

Poison ivy leaf shape and texture (presence or absences of hairs) is highly variable. Leaves with different shapes may be found on the same plant or on plants near each other. People may incorrectly identify poison ivy when observing a poison ivy plant with an unusual leaf shape. However, the old saying, “Leaflets three, let it be” should always be followed. While this approach may cause unjust suspicion of a harmless plant, sensitivity to poison ivy must be considered. 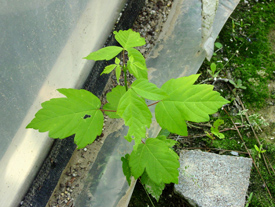 Poison ivy flowers are arranged on slender stalks. Each flower is small and has five yellowish-green petals. Poison ivy fruit is grayish-white in color, nearly round in shape, about 3/16-inch in diameter and contains a single seed. More than 55 bird species are known to consume poison ivy fruits.

Symptoms of contact with poison ivy include skin inflammation and blistering. All parts of the plant (stems, leaves, roots, flowers and fruits) are poisonous at all times of the year. A toxic, or sensitizing, oily compound (urushiol) is contained in specialized resin ducts in the various plant parts. The toxin is not normally found on the outside surface of intact leaves and stems; however, it is quickly exuded if the leaves or stems are crushed, bruised, brushed, chewed by insects or otherwise damaged. Humans are commonly exposed as they brush against the plant and bruise the leaves. Exposure also occurs when people come in contact with the toxin by touching equipment, clothing or animals that have been in contact with poison ivy. Dogs and cats also frequently transfer the toxin to people. Additionally, the toxin can be carried on soot particles in smoke from burning poison ivy and cause severe allergic reactions.

Sensitivity to poison ivy varies among individuals. Some are extremely allergic; others are not as sensitive. Following contact with the poison ivy toxin, 12 to 48 hours usually elapse before symptoms occur. However, with some individuals, symptoms may not appear for several days.

If contact with poison ivy is suspected, wash the skin with cold water as soon as possible. If done within five minutes, cold water may keep the urushiol from coming in contact with skin. Within the first 30 minutes, soap and water are may be used. If contact is suspected, clothes should be washed with detergent. Clothes can transfer urushiol to furniture and other household items.

There are several products on the market that can prevent or reduce the formation of allergic reactions if used immediately after suspected exposure (e.g., Tecnu®, Ivy- Block™, Ivy-X™). Information is available online about these products, and might be good for active gardeners and outdoorsmen to keep on hand.

Only the oily toxin can spread the rash. The fluid contained in blisters is non-allergenic.

Numerous topical ointments and lotions are available for treating poison ivy symptoms. A physician or pharmacist should be consulted for the appropriate treatment.

Poison ivy will not tolerate repeated tillage, cutting or mowing. Continually clipping the plant at or near ground level during the year for several years will eventually control poison ivy. Poison ivy shoots commonly encroach from wooded areas into newly established lawns. Herbicide use is not usually necessary since frequent mowing will eliminate the plant from the lawn. To prevent future encroachment into the lawn, poison ivy should be controlled in the adjacent wooded area.

Digging, or “grubbing out” poison ivy plants and roots can be used as a control method in small beds of landscape ornamentals. Waterproof gloves should always be worn when handling poison ivy plants (including the roots) to prevent contact with the poison.

Numerous herbicides are available for controlling poison ivy. Read all label directions before using any herbicide.

Because poison ivy has an extensive root system, multiple herbicide applications are usually necessary for effective control. Repeat applications should be made at the full-leaf stage of growth.

Glyphosate is a systemic herbicide and is translocated throughout plant leaves, stems and roots. The best control with glyphosate occurs when it is applied to poison ivy plants in the flower or fruit stage of growth. Applications at earlier stages of growth are not as effective; however, it may not always be practical to delay application until poison ivy is in the flower or fruit stage. Flowering generally occurs in the early summer months in Georgia.

Glyphosate can cause severe injury to other, desirable plants if the spray droplet particles contact the foliage or immature, green bark. Glyphosate should not be applied on windy days. Coarse sprays with large spray droplets rather than fine mist applications should be used to minimize drift.

Glyphosate may be used along fence rows, as a spot treatment in turfgrasses and pastures, and as a directed treatment in ornamentals and fruit and nut trees. In situations where poison ivy has grown into the canopy of large trees, up walls or other vertical structures, glyphosate can be used in combination with clipping the vine. In this method, the poison ivy vines are cut 2 to 3 feet above the soil surface. This will kill the portions of poison ivy above the cut. The remaining vine can be treated with concentrated glyphosate. A glyphosate concentrate of at least 41% can be used to treat the cut portion of this stem. It is recommend to paint the fresh cut with full strength glyphosate solution or a 50% dilution in water. This treatment should occur within 48 hours of cutting the glyphosate vine. If any regrowth is seen, it should be retreated with a 5% or 10% treatment solution.

Again, it is recommend to use at least a 41% glyphosate solution for treatment — approximately 6 to 12 oz of a 41% glyphosate solution to 1 gallon of water. Foliage, once fully expanded, should be sprayed until runoff occurs. If poison ivy is growing on trees, one should not be concerned if treatment is occurring on trees with mature, course brown bark of large trees, as no injury should occur to the tree. If inspection of the bark reveals green tissue, as is commonly found on deciduous trees that have been planted for one to two years, do not spray glyphosate on the bark of the tree.

2,4-D is either sold alone or in mixtures with herbicides such as MCPP, dicamba and triclopyr. 2,4-D is only marginally effective in controlling poison ivy. Products that contain 2,4-D in combination with dicamba and triclopyr will provide better poison ivy control than 2,4-D alone. However, dicamba (Banvel) or triclopyr (numerous trade names) will usually provide better control than the herbicides that contain 2,4-D as one of the components in the mixture. 2,4-D and 2,4-D mixtures are applied at the full leaf expansion growth stage of poison ivy. Repeat treatments will be needed to control new flushes of growth.

2,4-D and 2,4-D mixtures will not injure most turfgrasses and other grasses; however, numerous broadleaf plants (e.g., ornamentals, fruit trees, muscadines, grapes, cotton, tobacco and many vegetables) are highly sensitive to 2,4-D and spray drift can severely injure these plants. 2,4-D drift injury can be minimized by using coarse sprays and by staying several feet away from sensitive plants. 2,4-D products are formulated as either amine salts or esters. Ester formulations of 2,4-D are subject to vapor drift, especially at high air temperatures (> 80° F.). Volatilization or vapor drift of 2,4-D ester herbicides can injure sensitive plants at considerable distances from the original site of application. Ester formulations should not be used during the warm months of the year. Follow labeled directions for use of product on weedy growth or cut stump applications.

Triclopyr is a highly effective postemergence herbicide used for controlling poison ivy and numerous other woody vines. This herbicide is sold under a wide variety of trade names for use in commercial agriculture, forestry and noncropland areas. Most of these products are not sold in lawn and garden stores and other retail outlets. However, Ortho® markets a brand name of triclopyr called Brush-B-Gon® in numerous retail outlets. For most homeowners, Brush-B-Gon ® is the preferred triclopyr formulation.

Similar to 2,4-D, triclopyr should be applied to poison ivy at the full leaf growth stage on a warm, sunny day. Triclopyr can also injure desirable broadleaf plants by spray droplet drift and use should be avoided on windy days. Follow labeled directions for use of product on actively growing weedy growth. Unlike glyphosate, triclopyr solutions should not be sprayed on the mature bark of trees. Triclopyr can be absorbed through the bark of some tree species and cause severe injury.

Triclopyr (Brush-B-Gon®) is recommended for use around homes, fences and in non-garden areas. It can be used near ornamentals, but do not spray when wind conditions favor spray drift.

Triclopyr is commonly used to prevent the regrowth of sprouts from tree stumps. When used in this fashion, undiluted triclopyr is “painted” on the sides and cut surface of the freshly cut tree stump. This “cut stump” method can be adapted to control poison ivy. Simply clip the poison ivy vine near the soil surface and “paint” the freshly cut surface with undiluted triclopyr. This method is useful for the control of small infestations of poison ivy in areas that are difficult or not practical to spray. Some regrowth of poison ivy will eventually occur and the “cut stump” method will need to be repeated.

Trade and brand names are used only for information. UGA Extension does not guarantee nor warrant published standards on any product mentioned; neither does the use of a trade or brand name imply approval of any product to the exclusion of others that may also be suitable.