Calibrating a manure spreader is a simple, easy management tool that can help producers use nutrients from animal manure efficiently and safely. Over-application or uneven application of manure wastes nutrients and increases the chance of ground or surface water contamination. By knowing the application rate of the manure spreader, correct amounts of manure can be applied to meet crop needs. The procedure takes less than an hour but can save hundreds of dollars through more efficient use of manure nutrient resources. Calibration, along with timely application to provide nutrients when crops can use them, helps ensure efficient and safe use of animal manures. 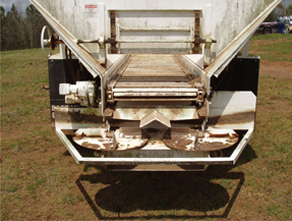 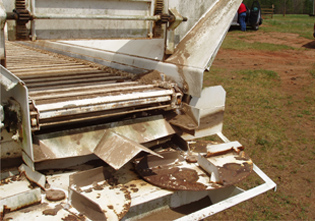 The application rate can be determined by mass balance. (Weigh the spreader before and after spreading and determine the area covered.) This procedure tells us how much was applied over a given area, but it tells us nothing about how evenly the manure was applied. A much better method is to catch samples at locations across the path of the spreader and use them to determine the spreader application pattern. The application rate at a given point can be determined using the amount (lbs) of manure captured on a tarp at that point and the following simple formula:

To make the math even simpler, if you use tarps that are 4' 8" x 4' 8", the area of those tarps is 21.8 ft2 and the application rate in tons/acre is equal to the pounds of manure on the tarp.

Uniformity can be achieved only with an acceptable distribution pattern (see Spread Patterns section) and spacing the paths based on the effective swath widths. 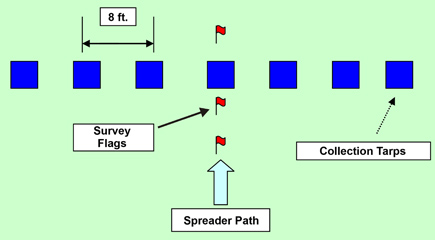 Acceptable spread patterns are shown in Figure 5. The area between the dashed lines represents the approximate effective swath width. If spreader paths are spaced at this interval, a uniform distribution should be achieved. 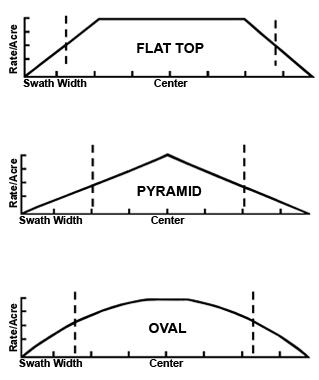 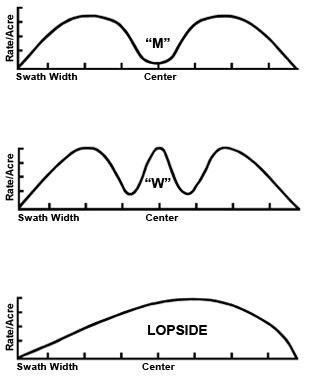 A common problem seen with twin disk spreader trucks is that the door over the spinner disks is opened so wide that much of the litter bypasses the disks and is deposited directly on the ground behind the spreader. This causes a high peak in the center of the distribution pattern with much lower rates on either side of the truck. This pattern is seen in Figure 7 as the “single pass” distribution (solid line). Figure 7 further illustrates that, while increasing lane spacing from 16 to 40 feet lowers the average application rate (from 3.3 to 1.3 tons/acre), application rate remains uneven for all lane spacings shown. 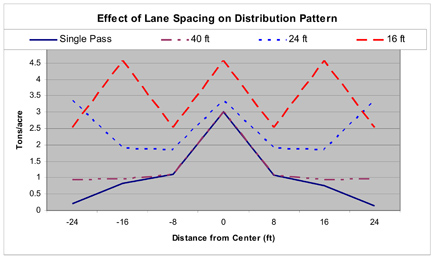 Operators commonly try to compensate for this problem by speeding up the spinners, but this only causes the manure that hits the disks to be thrown farther. Much of the manure still bypasses the spinners, causing a high peak at the center and a wider distribution on either side. Disk speed for most trucks should not be more than approximately 600 rpm for spreading litter or manure. The uniformity can be improved by narrowing the swath width, but the real remedy for this problem is to partially close down the gate so all of the manure is spread by the spinners.

If the spread pattern is acceptable and a proper swath width is used, then the average application rate is the amount at the center of the pattern. If the lane spacing is other than the effective swath width, or if the pattern is not one of the acceptable ones, the average application rate can be estimated by averaging the amount of litter recovered on the seven sample tarps and adjusting this number to account for lane spacing.

For instance, if we use the data from Figure 4, the average amount on the seven tarps is 1.4 tons/acre, and the tarps were sampling an area 56 ft. wide. (7 tarps x 8-ft spacing = 56 ft.) If no overlapping of patterns takes place, the manure would be applied at 1.4 tons/acre. If the spreader lanes are 40 feet apart, then the average application rate would be 56/40 x 1.4 = 2.0 tons/acre. If the lanes were 25 feet apart, the average rate would be 56/25 x 1.4 = 3.2 tons/ acre. Note that by looking at Figure 4, we can see that the effective swath width is approximately 25 feet, and the 3.2 calculated above is approximately equal to the maximum rate of 3 tons/acre.

Manure spreader calibration enables the operator to know how much manure is being applied and that the application is uniform across the field. Once the spreader pattern is determined and adjusted if needed to obtain an acceptable pattern, the lane spacing that will yield an even distribution of manure nutrients can be determined.

These nutrients, when applied during the growing season, can then be safely used by the crop, adding to the producer’s bottom line and lowering the risk of surface or ground water contamination.

A computer spreadsheet is available for use in plotting spreader patterns and calculating application rates based on calibration data. It can be found on the AWARE home page (www.agp2.org, click on Animal Waste Management). Look under Nutrient Management and then CNMP Tools to find the spread sheet. For further assistance, contact your local county extension agent. (1-800-ASK-UGA1)