Circular 742
View PDF picture_as_pdf
This publication is part of the Home Garden series.

Pears are adapted to nearly all of Georgia. It is not uncommon to find trees as much as 50 years old that are still producing fruit. At one time pears were grown commercially on a large scale throughout the United States. Because of the prevalence of fire blight in the humid eastern and southern states, however, most of the pear production has been relocated to the drier areas of the Pacific Northwest.

Air drainage and freedom from spring frosts are important in the location of pear trees. Pear trees bloom relatively early, normally from one to several weeks before apples. So they are much more subject to the hazards of spring frosts.

As with all fruit trees, sunlight is a key to maximizing fruit production. Pick an area where the trees will be in the sun most or all of the day. The early morning sun is particularly important because it dries the dew from the leaves, thereby reducing the incidence of diseases. If the planting site does not get plenty of sun, do not plant pear trees. 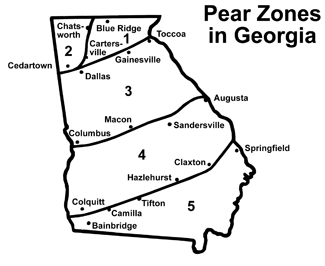 Two important types of pears are grown in the United States, the European pear (Pyrus communis) and the Asian pear (Pyrus pyrifolia). Bartlett is the most recognized European-type pear in America and is not adapted to the Southeast and should not be planted in Georgia.

Certain varieties are self-fruitful; that is, they can pollinate themselves. If you want only one pear tree, select a self-pollinating variety. Orient, Baldwin, Kieffer, and Spalding are at least partially self-fruitful.

Asian pears probably will cross-pollinate with more common Georgia varieties, but information on this is limited. As such, planting several Asian pear varieties together is recommended.

Because pears have a tendency to grow upright with very narrow crotch angles, early training and pruning are necessary to develop a strong tree. Four- to 6-ft unbranched whips on calleryana rootstocks are most desirable. Plant them 20 ft apart. If planting is delayed, heel them in by completely covering the roots with soil. Pack the heel soil eliminate air pockets. Never allow the roots to dry out. If the roots are dry when you receive the trees, soak the entire tree in water for several hours.

At planting, prune the trees back to single whips 24 to 30 in. from the ground line. After a single growing season, your tree should look similar to the tree in Figure 1. Prune off any limbs that are less than 18 in. from the ground, leaving four to six limbs to be the scaffolds (main fruiting limbs on a mature tree). Figure 2 illustrates what Figure 1 should look like after pruning. 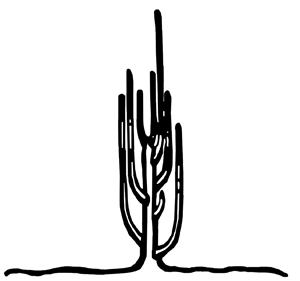 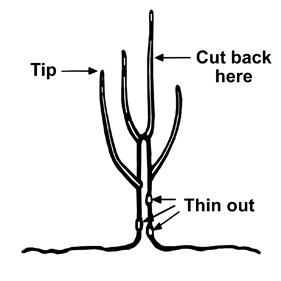 After the second season, tie down the lower scaffolds to a 45-degree angle to help open up the tree to light. Prune out crossing, broken and/or diseased limbs and also vigorous upright (vertical) sprouts that may develop along the limb.

Pruner’s Note: Pear trees are extremely susceptible to fire blight, a disease that kills limbs and sometimes whole trees. Remove diseased branches as soon as they appear. When pruning out a diseased limb, cut at least 6 in. below the area where any infection appears. After each cut, dip the cutting surfaces of your pruners in rubbing alcohol or a 1:9 chlorine bleach:water mixture. Burn the diseased prunings or have the garbage collector haul them off. 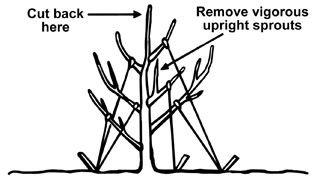 Figure 3. A 2-year-old tree properly trained with strings on scaffold limbs in the dormant season. Train limbs to a 45-degree angle.

Pears do best in soils with a pH of 5.9 to 6.5. Have your soil tested before planting, and follow the recommendations. You can get information on soil testing from your county extension office. Fertilize pear trees annually, using a split application. Apply 1 cup of 10-10-10 fertilizer per tree per year of tree age, with a maximum application of 12 cups. Apply half of the amount before growth begins and the other half after fruit set. Broadcast each application over an area that corresponds with the drip line of the tree. If you do not get a fruit set, do not apply the second half of the application.

If the trees are heavily pruned, reduce the amount of fertilizer applied in relation to the severity of pruning. Heavily pruned trees most likely will not need fertilizer for a year or two. Also, if the pear trees make too much vegetative growth, reduce the rate of fertilization for the next year. Shoot growth on bearing pear trees should average only about 6 in. annually.

To attain highest quality, pears must be harvested before they are ripe. If picked too early, they are under-sized and lack sweetness and flavor. If picked too late, the fruit ripens quickly, is gritty in texture, and is subject to core breakdown.

One measure of maturity are the fruit lenticels. These are the small “dots” or indentations on the fruit’s skin. Lenticels of immature pears are white; however, as cork cells develop the lenticels become brown and shallow. The brown in the lenticels is a good indication that the fruit is ready to be picked and will ripen without shriveling. Color between the lenticels also becomes lighter green than at the lenticels.

Diseases and Insects that Attack Pears

Fire blight is a disease that you should learn to recognize if you plan to grow pears. The disease can attack pears throughout the growing season, but it usually begins during bloom. Blighted tissues become water soaked then quickly wither and blacken. The disease moves down the branch from the point of infection. The tissue under the bark of the most recently killed leaves or flowers will be darkened and moist in appearance. During periods of high humidity or rain, the blighted areas will usually ooze a milky fluid. This fluid becomes reddish brown as it dries.

Pear trees can be protected from fire blight by a spray program beginning at bloom and continuing through the summer. Once a tree has been infected, cut out and burn the diseased portions. Sprays will not control the disease in infected branches. Make cuts 6 to 8 in. below any dead tissue. After each cut, soak the clippers for a few seconds in a solution prepared by adding ½ cup of household bleach to 5 cups of water. When cutting is completed, rinse clippers in running water and oil lightly.

Many other conditions such as nutrient imbalances, winter damage or drought stress can cause pear leaves to blacken and die. In these cases, the tissue under the bark in the afflicted area will remain green or have a dry brown appearance.

Pear leafspot begins as small purplish-black spots on the leaves or fruit. The spots gradually enlarge to form brown lesions about 1/8 to 1/4 in. in diameter. A small, black blister may appear in the center of these spots. Leafspots can only be controlled with a spray program beginning as the first leaves appear and continuing through July.