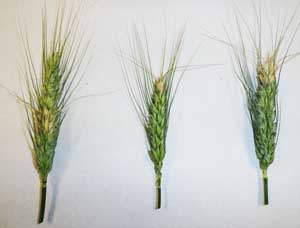 Fusarium Head Blight (FHB), also called scab, is a devastating and dangerous disease of wheat and barley with worldwide distribution. The disease causes yield loss, lowtest weights, low seed germination, and contamination of grain with mycotoxins. A vomitoxin called deoxynivalenol (DON) is considered the primary mycotoxin associated with FHB. This mycotoxin is subject to regulatory limits by the U.S. Food and Drug Administration (FDA). Historically, FHB infections have been extremely low in Georgia. However, FHB incidence was widespread throughout the state in 2014. In the southwestern part of the state, FHB was particularly severe in commercial fields and on University of Georgia research plots. At some experimental plots in the UGA Southwest Georgia Research and Education Center in Plains, Georgia, FHB severity reached up to 50 percent.

FHB is caused by fungi of the genus Fusarium, in which F. graminearum is most commonly involved in the Southeast (Figures 1A and 1B). F. acuminatum and F. reticulatum have also been identified in FHB infected wheat (C. Cowger, NCSU). 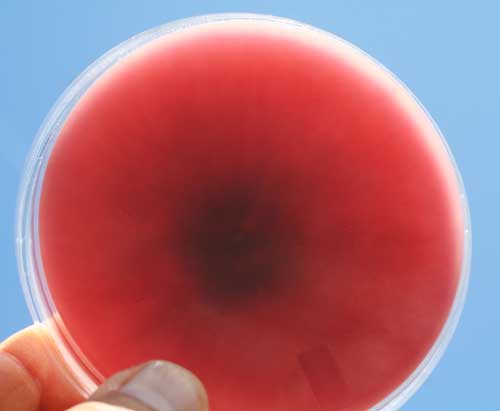 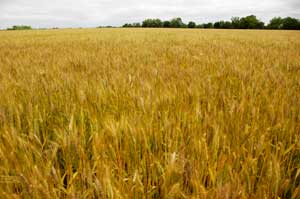 The disease is most often found in wheat (Figure 2), but can also affect barley, oats, rye, and some forage grasses. FHB is best recognized by the bleaching of florets in the spike or head (Figure 3). 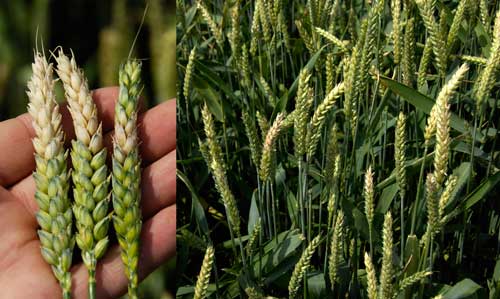 Severe infections can cause premature blight or bleaching of the entire spike. Other symptoms include tan to brown discoloration at the base of the head. Usually a pinkish/orange mycelium is present at the base of the florets under moist conditions, and kernels that are shriveled, white, and chalky in appearance — resembling tombstones (see individual grains on the left in Figure 4). Perithecia (dark fruiting bodies) are produced within the mycelium later in the infection process. Diseased, bleached spikelets are sterile or contain shriveled/discolored seed (usually with a tint of pink or orange).

Figure 4. Symptoms of Fusarium Head Blight on wheat spikelets and kernels. FHB Infected kernels are compared to healthy kernels in the far right of the figure (Photos: Rome Ethredge and Alfredo Martinez).

While the disease causes yield loss, low-test weights, and low seed germination, the contamination of the grain with mycotoxins is also a concern. A vomitoxin called deoxynivalenol (DON) is associated with FHB and is subject to regulatory limits by the U.S. Food and Drug Administration (FDA). There is a 1 ppm limit for DON in all finished wheat products (flour, bran, and germ) that may be consumed by humans. Limits of 5-10 ppm have been set for animals (Table 1). Animals with simple stomachs, such as dogs or swine, are more sensitive than ruminant animals. Mycotoxins are highly stable and levels will remain unchanged for years in storage. Producers should not mix clean grain with grain identified to have greater than 1 ppm of DON to achieve a lot that will be accepted by the elevator. This is considered to be adulteration of grain by the FDA and is subject to criminal penalties.

The fungi that cause FHB can overwinter on crop stubble such as wheat, barley, and corn, and as soilborne inoculum. FHB is introduced into a field through infected seed or wind-borne inoculum. The fungus is spread rapidly by rain splash and wind. The head, and in particular the open female flower during anthesis (pollination), is most susceptible to infection by Fusarium spores. Some infection can occur during kernel development. Moist environmental (rain, irrigation, fog, and long evening dew periods) conditions favor spore (inoculum) production and infection. Recent models have suggested that three or more rain or irrigation events from anthesis until 3-5 days post-anthesis and temperatures ranging from 77 to 86 degrees F (25 to 30 degrees C) will result in severe scab if inoculum is present and the variety is susceptible.

FHB is extremely difficult to predict and control, so a multi-pronged approach is most effective.

Forecasting is county or even field dependent, and several factors have to be taken into consideration such as the variety grown, and most specifically, if flowering time coincides with wet conditions and moderate temperatures. There are FHB forecasting models that can assist (e.g., at www.wheatscab.psu.edu), but constant monitoring of the forecast site is needed as sometimes the models either exacerbate or downplay the probability of infection. For more information on forecasting, see the U.S. Wheat and Barley Scab Initiative, http://scabusa.org.

Crop sequence (what crops were planted and when) and tillage (soil incorporation of crop residues) have been shown to affect the incidence of FHB. Sorghum and corn are host for some Fusarium species that cause FHB. In recent years, decreases in tillage may have contributed to the increase in regional FHB epidemics by increasing levels of inoculum available for infection. Managing cereal crop residue will reduce the amount of overwintering inoculum that can infect a subsequent wheat crop. The relative contribution of inoculum from local and distant sources is not yet fully understood. In regions where there is a significant source of airborne inoculum, local management of the disease may not be effective. Staggered planting and/or varieties with different maturities (and thus different flowering times) may help to avoid losses. If possible, avoid irrigation during flowering to reduce humidity and, therefore, to reduce the infection period. 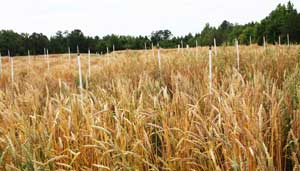 Since the early 1990s, an extensive research effort has focused on development and use of resistant wheat varieties for the control of FHB. Thousands of plant lines are subjected to artificial inoculation with FHB (Figure 5). Those lines having reduced fungal growth and low levels of seed contamination with the mycotoxin DON are selected and advanced in additional breeding trials. Moderately FHB resistant but not highly FHB resistant commercially wheat varieties are currently available. Producers are encouraged to select varieties that have some level of FHB resistance. Resistance ratings are available from seed dealers and the annual Statewide Variety Testing Report ("Georgia 2014 Small Grain Performance Tests," UGA Extension Annual Publication 100-6.

Control using fungicides can be difficult due to the specific time the fungicides need to be deployed and because selection of fungicides labeled for FHB is limited. Timing of fungicide applications is crucial for the control of FHB. Foliar sprays with a triazol fungicide work best when applied at or within a week of early flowering. The use of nozzles that provide good coverage of the spike is essential for proper disease management. The fungicides labeled for FHB disease-suppression only are listed in Table 3. Strobilurin fungicides are not recommended for management of FHB. Data from other states seems to indicate that Strobilurin fungicides can increase the DON content of FHB-infected grain.

Adjust combine so lightweight, shriveled kernels are also removed with chaff. The goal is to blow the lightweight, diseased kernels out the back of the combine without blowing out too many good kernels. This technique is feasible when the rest of the grain is of good quality. In fields severely affected by leaf diseases, the lower test weight of the grain may make it more difficult to separate normal kernels from Fusarium damaged kernels.

Fusarium damaged crops can be harvested and handled safely, provided normal precautions are taken to avoid exposure to grain dust. FHB can cause toxicity to humans and livestock if INGESTED. Standard precautions to avoid dust exposure while harvesting and handling should suffice. Grain dust can be hazardous, regardless of whether or not Fusarium is present and prolonged exposure can contribute to serious respiratory problems. A good source of info on FHB handling can be found at: www.gov.mb.ca/agriculture/crops/plant-diseases/print,dealing-with-fusarium-head-blight.html#harvest