The herbicide 2,4-D has been used to control broadleaf weeds in numerous grass crops, including field corn, grain sorghum, rice, cereal grains, pastures and turf, for more than 65 years. The evolution and spread of glyphosate-resistant weeds has led to the development of 2,4-D-resistant crops, including soybean and cotton. Despite advancements in both formulation and spray nozzle technologies, planting 2,4-D-resistant crops in close proximity to peanut increases the risk of 2,4-D injury through off-target movement (drift, volatilization) and/or sprayer contamination. Therefore, the objective of this publication is to provide growers, county agents, crop consultants, etc. with information regarding peanut yield response to 2,4-D injury. 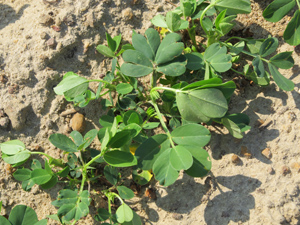 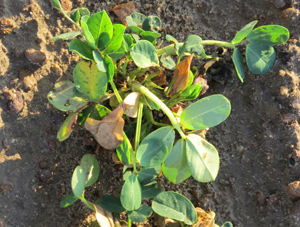 When evaluating peanut fields for suspected off-target movement or sprayer contamination of 2,4-D, it is important to eliminate other potential causes such as drought, nutrient deficiencies or certain plant diseases/viruses. In some instances, these problems might mimic the symptoms caused by 2,4-D or other growth regulator herbicides. Typical peanut injury symptoms caused by 2,4-D include plant stunting, stem twisting (epinasty) and occasional leaf burn. Examples of 2,4-D amine injury to peanut are presented in Figures 1 and 2. It is important to note that peanut growers are very familiar and comfortable with injury caused by postemergence applications of 2,4-DB (Figure 3). However, peanut plants are more sensitive to 2,4-D than to 2,4-DB.

Field trials were conducted in Georgia during 2011 and 2012 to determine peanut yield response to various rates of 2,4-D amine. Results are presented in Tables 1-3. When applied at 30 days after planting (DAP), only 16 or 32 oz/A of 2,4-D resulted in average yield losses in excess of 10%. Generally, average peanut yield losses were greatest when 2,4-D was applied 60 DAP. At that time, peanut plants were in the R3 to R4 stages of growth (beginning pod to full pod). Previous research has shown that yield losses in soybean (non-resistant) have been greater when 2,4-D was applied during reproductive stages of growth (Slife, 1956; Wax et al., 1969). Surprisingly, average peanut yield losses from 2,4-D applied at 90 DAP were < 10%.

Peanut yield response to 2,4-D is dependent upon rate and time of application. It is important that peanut growers are aware of the off-target movement and sprayer contamination risks associated with 2,4-D, especially when peanut plants are in the R3 to R4 (beginning pod to full pod) stages of growth. To avoid potential problems, growers should properly label all 2,4-D containers, thoroughly clean sprayers after 2,4-D applications and follow labeled drift management recommendations.