Concerns regarding glyphosate-resistant weeds have led to an interest in developing additional herbicide-tolerant crops. Dicamba tolerance (DT) is being developed in several broadleaf crops, including soybean and cotton. Formulations of dicamba that will be used in these DT-crops include Engenia™ and Roundup® Xtend.

Dicamba has a well-known reputation for off-target movement due to drift and volatilization. In Georgia, peanut is grown in close proximity to both soybean and cotton. Thus, the adoption of DT-crops increases the probability of drift, volatilization and sprayer contamination problems that could negatively influence peanut development and yield.

The objective of this publication is to provide county agents, peanut growers, crop consultants, agri-business personnel, etc. with information that can assist them in making appropriate management decisions after a suspected dicamba drift/volatilization or sprayer contamination problem has occurred.

When evaluating peanut fields for potential dicamba drift/sprayer contamination problems, it is important to rule out other potential causes. Excessive drought, nutrient deficiencies and certain plant diseases can cause symptoms that often mimic herbicide injury. Examples of dicamba injury symptoms on peanut plants are presented in the following pictures: 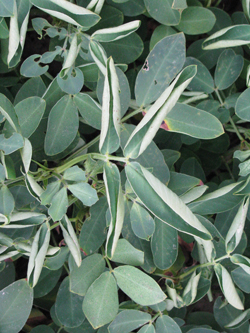 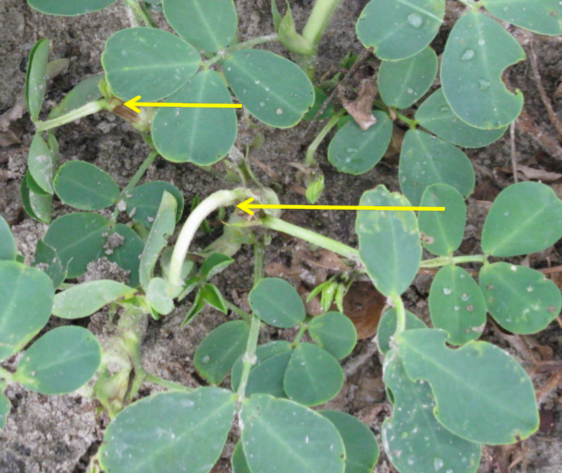 Field trials were conducted in Georgia to evaluate the influence of dicamba on peanut yield loss when applied at 30, 60 and 90 days after planting (DAP). Results of these trials are presented in Table 1. Peanut yield losses were greatest when dicamba was applied at 60 DAP. At this time, peanut plants are in the R3-R4 stage of growth (beginning pod to full pod stage). In general, broadleaf plants are more sensitive to dicamba during the reproductive stages of growth.

Depending upon the rate and time of application, peanut plants can be very sensitive to dicamba. Consequently, it is extremely important for growers to utilize drift reduction strategies when applying dicamba near peanut fields. Sprayers should be thoroughly cleaned of dicamba residues before spraying sensitive broadleaf crops. It is also critical that dicamba containers be properly labeled and stored in order to minimize potential mixing errors that could result in undesirable sprayer contamination.