The Biology and Ecology of Palmer Amaranth: Implications for Control

Palmer amaranth is a highly competitive weed of field corn, cotton, peanut and soybean and has been confirmed to be resistant to glyphosate in nearly every agronomic county in Georgia (Figure 1). Glyphosate-resistant (GR) Palmer amaranth?s establishment and spread has been assisted by its rapid growth rate, extensive rooting structure, high seed production, physical seed movement (man, animal, water) and by pollen (wind) dispersal. Growers must understand the biology and ecology of GR Palmer amaranth if effective control is to be achieved. 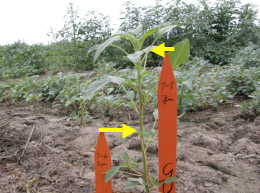 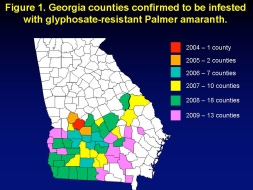 Palmer amaranth converts CO2 in the air into sugars via photosynthesis more efficiently than corn, cotton or soybean, allowing rapid growth even under hot and dry conditions. Under ideal growing conditions, Palmer amaranth is capable of growing several inches per day (Figure 2).

Herbicides tend to be more effective on smaller plants. Because of Palmer?s rapid growth rate, the window of time available to make effective topical herbicide applications is very short. 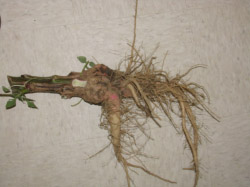 Palmer amaranth has a deep taproot as well as a network of finer, fibrous roots (Figure 3). Research from North Carolina has shown that Palmer amaranth can produce more and longer roots than soybean. Palmer?s roots are better than soybean roots at penetrating compacted soils.

Because of its rooting structure, Palmer amaranth may have more access to water and nutrients than many commonly grown crops. This contributes to Palmer amaranth?s rapid growth and competitiveness. The presence of a taproot can make it difficult to remove Palmer amaranth by hand. Broken-off stems as small as 1 inch can resprout, flower and produce seed. 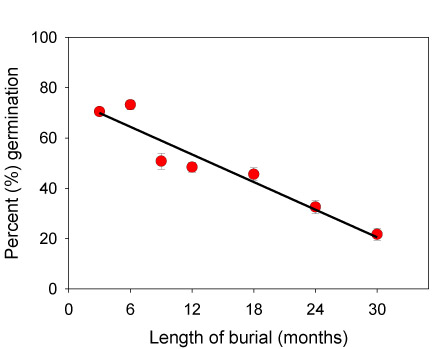 Amaranth seed require sunlight for germination; the majority of seeds that do emerge will have likely germinated in the upper 2 inches of soil. Although Palmer amaranth produces a lot of seed, those seed are fairly short-lived in the soil. Research at UGA has demonstrated that after three years of burial, with no natural predation, almost 80% of the seed will have died (Figure 4).

This year?s seeds become next year?s weeds! Effective weed management means removing all Palmer amaranth plants from a field before they reach reproductive maturity to prevent seed production. Winter cover crops that provide sufficient amounts of biomass can be used to suppress Palmer amaranth in strip tillage operations. Cover crops shelter the seeds from sunlight and physically interfere with seedling emergence. When heavy infestations exist, moldboard plowing may be required to bury seed below their optimal germination/emergence zone. Deep tillage operations should only be used infrequently so that the deeply buried seeds can die and decompose. 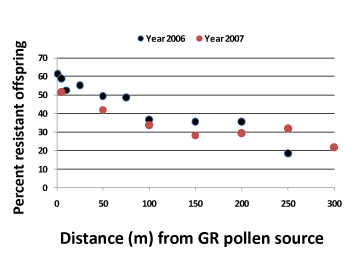 Palmer amaranth produces male and female flowers on different plants. For seed to develop, pollen from a male plant needs to be carried by the wind to a female plant. If pollen from a GR male Palmer amaranth fertilizes a susceptible female, a portion of the offspring will also have the resistance trait. UGA research has shown that pollen from GR males can travel at least 1,000 feet (300 m) in the field and fertilize susceptible females (Figure 5). Seeds can also move resistance around. Palmer amaranth seeds are known to spread on equipment, in flowing water and by animals.

Herbicide resistance is mobile since it spreads by both pollen and seed. GR pollen can fertilize distant susceptible females; resulting seed will be resistant to glyphosate as well. GR seed may be spread from field to field after getting caught up in cotton pickers, mowers or trapped in mud on tractor tires. To slow the spread of resistance, don?t allow plants to reach reproductive maturity and produce pollen and seed.