Bulletin 807
View PDF picture_as_pdf
This publication is part of the Home Garden series. 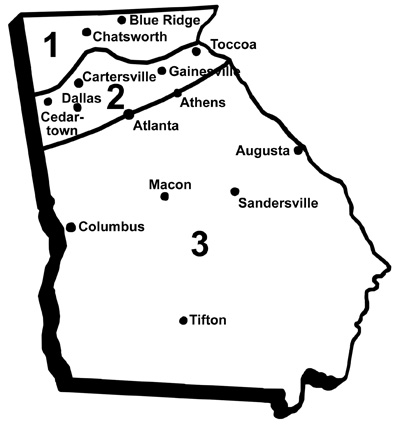 In the Mountain and Piedmont areas of Georgia, late spring frosts can reduce yields significantly, so plant bunch grapes on elevated sites if possible. In all areas, avoid low spots where cold air settles. The site should be in full sun most or all of the day. Well-drained, loamy sand, sandy loam, loam or clay loam soils are best for grape production. Avoid areas where water stands after heavy rains.

American type bunch grapes and Summer grapes are usually grown on their own roots in North Georgia. European grapes and French hybrids are usually grafted on rootstocks such as SO4 or 3309 to provide increased Phylloxera resistance. On sandy sites (especially in South Georgia), test for the presence of root knot nematodes. If they are present, grapes should be grafted on nematode resistant rootstocks such as 'Tampa,' 'Florilush' or 'Dog Ridge.' Low vigor varieties are often grafted to improve their vigor, this noted in the tables.

Many varieties of American type bunch grapes will perform well in Areas 1 and 2 in Georgia. Also, certain selections of French Hybrid grapes (wine grapes) are suggested for trial in these areas. Several hybrid bunch grapes are worthy of trial in Area 3 of Georgia. (See tables 1 and 2.)

Varieties Suggested for Home Garden Trials in Area 3 in Georgia

Bunch grapes, unlike muscadines, do not require cross-pollination, so it is not necessary to buy two or more varieties for pollination. You may, however, want several varieties to extend the fruiting season.

Most bunch grapes are sold as 1-year-old or 2-year-old plants. Generally, the 2-year-old plants grow off better and are worth the small extra investment. Be sure to purchase them from a reliable source.

Planting the Vine and Plant Spacing

It is easiest to construct the trellis before planting, but it can be done after planting. Since most bunch grapes are somewhat less vigorous than the native muscadine grape, only 8 to 10 feet of row will be required for each vine. Lay off the rows at least 10 feet apart (12 feet on hilly land). Use straight rows for level or slightly rolling land and contour rows for hilly terrain. Prior to setting the vines, soil test and adjust the soil pH to 6.0 to 6.5 with dolomitic limestone. Most Georgia soils are low in magnesium, thus the need for dolomitic limestone.

To plant, prepare a hole large enough to accommodate the entire root system in its natural spread. Set the plant at or slightly below the level it grew in the nursery. Fill the hole with the natural topsoil and firm it. Do not place fertilizer in the hole. (See section on fertilization.) After firming the soil, water liberally.

Following planting, cut the vine back to a single stem with two to three good buds remaining. After growth begins, select the main trunk of the vine from the stronger of these shoots.

Normally number 9 wire is used for grape trellis construction. All posts should be pressure treated or made of termite/rot resistant wood such as heart of cedar.

The Double Curtain Trellis — This trellis system is usually the most desirable of the three systems because of increased yields. The trellis system has two wires 4 feet apart and 5½ feet above the ground. Figures 1 and 2 show details of how to construct the double curtain trellis. A simple T-bar trellis constructed from treated 4" x 4" posts can also be used. 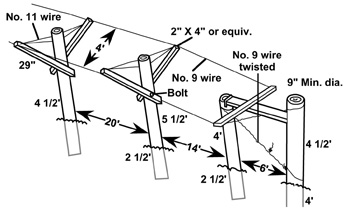 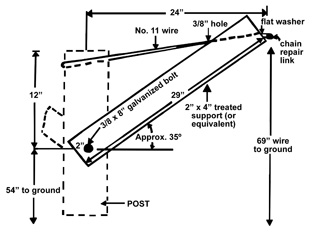 The Two Wire Vertical Trellis — The two wire vertical trellis used for the four-arm Kniffin training system is considerably less expensive to construct than the double curtain trellis. However, shading of the foliage on the lower fruiting canes by the upper canes reduces the quality and productivity of the grapes on the lower wire. Figure 3 illustrates the construction of the two-wire vertical trellis. The primary use for this trellis is in situations where space is limited, but where there is good direct sun exposure. If direct sun exposure is limited, use the double curtain or single wire trellis.

Single Wire High Trellis — This trellis is recommended where diseases are a problem. The vines dry off more rapidly after a rain on the single wire. Space the vines 10 feet apart when using this trellis. Yields are lower than the other two systems, but construction is easy. Construct end supports as shown in Figure 3. 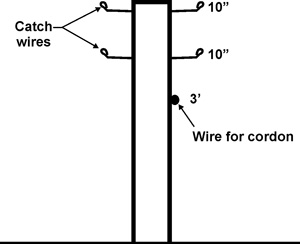 Figure 4. Detail for constructing the Single Wire Low Trellis with Catch Wires. View looking down the row. Special nails or a bend nail can be used for the catch wire.

First Year — Regardless of the training system to be followed, your goal is the development and establishment of a well develop root system. It is recommended that after planting, the strongest cane be cut back to two or three strong buds. Remove any other canes present. Because it is sometimes difficult to determine the condition of a dormant vine, however, some growers prefer to leave five to six buds and then, when growth starts, only allow the most vigorous or desirable buds to develop into shoots. 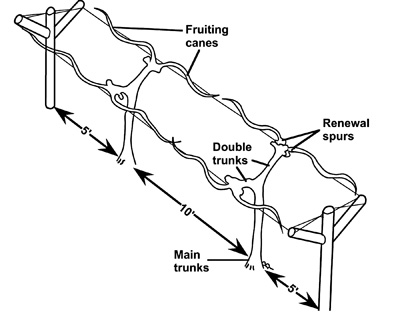 If the trellis cannot be constructed the first growing season, then a stake 4 to 5 feet high should be driven in the soil near each vine and the new growth trained to it. Tie the shoots loosely, or with plastic tape, to avoid the possibility of girdling. In cool areas of the country, growth rates are slow and vines are often pruned back to near ground level the first winter to help develop a vigorous trunk the second year. In Georgia the growing season is long and vines often make impressive growth the first year.

Double Curtain — Develop a double trunk (Y shape) for each vine approximately 30 inches above the ground. This is done by pinching out the growing point and forcing two shoots to develop. One trunk should be allowed to grow to one of the trellis wires and the other trunk to the other wire. Just below the wire, pinch out the tip of the growing shoots to encourage side branches. Under good conditions, the trunk system for the grape vine should be developed by the end of the first growing season.

Two Wire Vertical Trellis — Develop a single strong shoot arising from the young plant by removing competing shoots. Train this shoot to a string or stake running from the upper wire of the trellis to the ground. Just below each wire pinch out the tip to encourage two side arms to develop.