Alternatives to Petroleum-Based Containers for the Nursery Industry

Prior to the advent of containers, plants were most often sold and shipped bare-root, usually with roots coated in a slurry (typically clay-based) and wrapped in moist burlap or another cloth to maintain moisture. Alternatively, the plants were balled and burlapped by hand. Commercial production of nursery crops in containers began in earnest after World War II. Returning soldiers and economic prosperity in the late 1940s into the 1950s led to a rapid increase in housing developments, thereby requiring landscape plants in large numbers. Nurseries responded to this need by growing plants in containers, shipping plants longer distances from the nursery, and streamlining production. Containers were seen as a way to prolong plant life and health (particularly of root systems) and reduce transportation costs (because container substrates are lighter than field soil). Furthermore, container nursery production allowed for use of land unsuitable for field production, and planting activities could occur regardless of land or weather conditions. Growers realized containers allowed for production of plants in areas distant from markets, but where land was cheaper and the climate better suited to rapid plant growth via long growing seasons and predictable rains (e.g., Sun Belt states). Beginning in the 1970s, container nursery production acreage rapidly increased such that container nursery production is now the dominant method of nursery production.

Long before nurseries began using plastics, container production nurseries grew specimen plants in large clay containers. However, weight and size limitations as well as the potential for breakage prompted clay container replacement by tar paper or metal containers. Commercial food cans used by restaurants were reused as containers because they were larger, sturdier and cheaper than clay pots. Their larger size better accommodated the plant sizes needed by the landscaping market. Gradually, used metal food cans dominated container nursery production. Some growers today still use the term "can" interchangeably with "container." Before planting, metal cans often were further processed to dull any sharp edges (from where the top of the can had been removed by restaurants) and to punch drainage holes in can bottoms. As container nursery production became more popular, metal containers were custom designed, which included tapering sides to more easily nest and stack containers as well as coating them with rust-resistant paint.

Plastic containers specifically manufactured for container nursery production eventually replaced metal cans. Over the years, plastic container manufacturers developed different types of container products, such as injection molded, blow molded, pressure formed, vacuum formed and thermoformed, each with varying characteristics and advantages for different plant growth, shipping or marketing needs. As a standard in the industry, plastic nursery containers are lightweight, durable, familiar to growers, work well with automation, and can be reused or recycled.

Petroleum-based plastics are subject to the whim of the rapidly changing availability and price of petroleum (Figure 1), leading to considerable variation in plastic container costs. Containers made from alternatives to petroleum-based products are very appealing to consumers and growers alike. Studies have shown that consumers prefer and will pay a premium (value-added) price for containers that are "carbon neutral" or composed of majority recycled or waste product materials (e.g., rice hulls or wood/paper waste) (Hall et al. 2010; Yue et al. 2010). Also, containers made from non-petroleum-based components sidestep issues relating to petroleum and may decompose naturally, thereby eliminating or reducing landfill waste. Finally, some alternative containers offer labor savings because the container does not need to be removed before planting and is planted with the plant and decomposes. These labor savings may accrue in the nursery (as when transplanting into larger containers) and can also benefit landscape contractors and consumers. 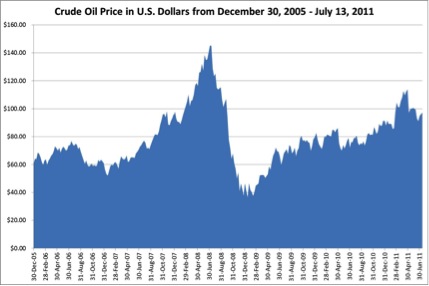 Figure 1. Crude oil price per barrel in U.S. dollars from December 30, 2005 to July 13, 2011. Note the vast fluctuations in prices that can lead to volatility in plastic container prices.

Alternative containers may be made from a variety of materials (Table 1). Typical components are plant-based or organic materials that are naturally fibrous or are chopped or ground and then molded and held together by adhesives (resins) and binders. These alternative containers for nursery use must be sturdy enough to allow plants to be grown, shipped and displayed for sale — a timeframe that ranges from a few months to several years depending on container size and plant type. Ideally, the containers also must be able to biodegrade when planted or decompose in a compost pile when discarded so they don't contribute to landfill waste.

Alternative container lifespan depends on components and additives and should be matched to the crop production cycle. Some alternative containers may biodegrade too quickly for some nursery crops that grow in the container for long periods of time. This necessitates different formulations for long-term use, such as with woody ornamentals, and for shorter crop cycles, such as with perennials or annuals. Adhesives, binding agents and other compounds are added to mold, stabilize or strengthen containers and extend container lifespan. These additives may be synthetic, natural or a mixture and may or may not be compostable or biodegradable.

Containers made from these alternative components usually are compostable but may not biodegrade quickly when planted. Biodegradable (plantable) containers are left on the root ball when planted into the landscape or another larger container. They are usually designed to allow roots to penetrate container walls and to decompose quickly after planting. Compostable containers must be removed before planting and are designed to be broken apart and composted.

Considerations for alternative containers include physical properties of container strength, water loss through the container surface (affecting amount and frequency of crop irrigation), algal and fungal growth on container exterior (affecting appearance), and, if planted with the plant, rate of container decomposition in soil (Evans, Taylor, and Kuehny 2010).

Costs and Marketing of Alternative Containers

Containers made from alternative components are not as inexpensive as might be expected. These products and manufacturing technologies are still evolving, as are grower and consumer acceptance. Efficiencies of scale may eventually lower bulk-rate costs, especially if petroleum costs increase as expected. Some of the additional costs of alternative containers may be justified by growers on the basis of marketing a value-added product. In this case, the additional value comes from the opportunity to promote the containers for their biodegradable/compostable construction or their manufacture from waste or recycled products. Finally, a sharp increase in demand for alternative containers in previous years shows no signs of decreasing; therefore, with increasing demand and manufacturing rates, alternative container prices should continue to fall. This should increase the profit margins of plants grown with alternative container types and, together with improved container durability, could lead to a major shift in production techniques in the future.